Google Reader is dead. Sad face. Here's what to use instead. 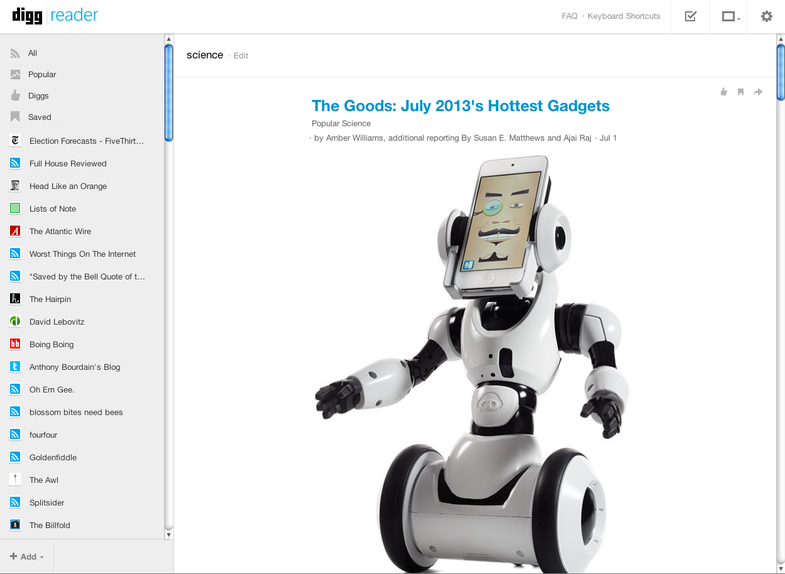 Google announced that it’s killing Google Reader, the company’s popular RSS-reading web application, despite the fact that it’s far more popular than the still-extant Google Plus. Reader, like Gmail and Google Maps, has become the go-to service in its category; there are plenty of RSS reading mobile apps, or superpowered desktop software, but the simple, effective web-based reader is the domain of Google Reader. And now it’s dead, as of today. This is upsetting. But there are alternatives!

So, here’s what to use instead:

Digg Reader, the long-awaited RSS reader from the minds behind the relaunched Digg.com, is finally available. It’s designed to make the switch from the deceased Google Reader as easy as possible; as of this morning, you can import your Google Reader feeds with a single click on a prompt that pops up when you visit for the first time. It’s a web app, like Google Reader, but it’s even more clean and streamlined. That’s good in some ways–it’s fast and simple–but those looking for some of the more advanced Reader features may have to look elsewhere. Still, if you just want to read RSS feeds? This is a great choice. Check it out here.

So you want to move on from Google Reader with the least possible fuss, eh? That means you’re looking at a web-based RSS reader, one that can accept your Google Reader feeds before they no longer exist, one that has apps for your iPhone or Android phone and syncs between them seamlessly. Luckily this is not that hard to do; you can export your feeds from Google Reader and then import them with any of the services/apps on this list.

We hear good things about The Old Reader, which visually imitates Google Reader circa 2011, but without a mobile app, it’s not a true solution. Our recommendation? NewsBlur, pictured at top. It’s got nice apps for the web, Android, iPhone, and iPad, it looks sort of like Google Reader, albeit a slightly uglier/busier version, and it even has some cool bonus features, like the ability to see the original page rather than an extracted feed. It’s free with some limits (though they’re not very restrictive; you can get by with the free version pretty easily) or you can spring for the $1 per month premium version. 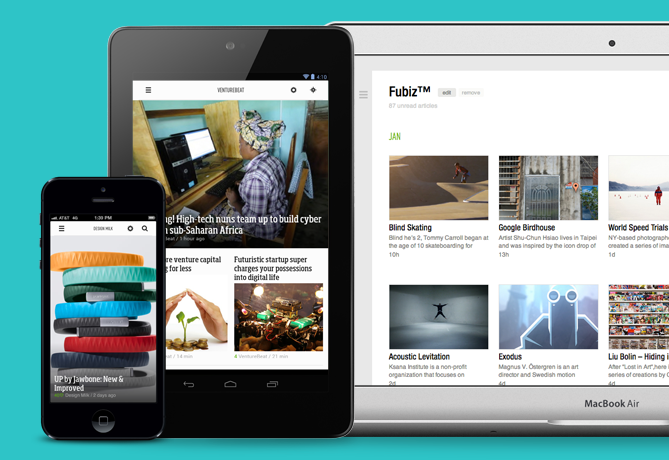 Mix It Up, Just A Little

If you’re willing to try something a little bit–but just a little bit–different, we recommend Feedly. Feedly works the same way as Google Reader on the back end–it takes your feeds, syncs seamlessly with mobile apps, lets you share or save for offline reading. But it looks quite different from Google Reader; whereas Google’s solution was panel-and-text-based, Feedly is visual, offering feeds and individual posts in the form of thumbnails. It’s certainly pretty, but the new look won’t be for every ex-Reader (Reader-er?): there’s less info on the screen, which gives more weight to individual stories and makes it harder to skim. It’s free on the web (with an excellent Chrome extension), Android, and iOS. Maybe the best part? Feedly is totally prepared for the demise of Reader, and has a system in place (cheekily called “Normandy”) which makes it as easy as possible to shift your RSS life over to Feedly. 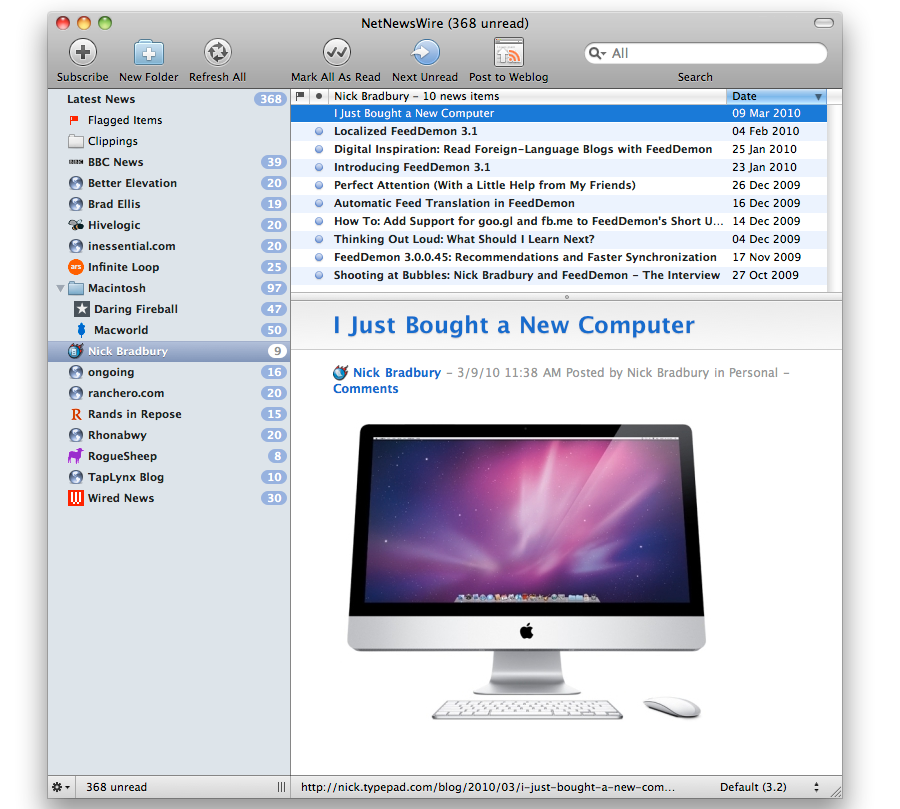 This would be a major shift; the beauty of Google Reader is that it syncs your feeds with any device you’d care to read them on, and moving to a non-web-based app introduces some complications into the mix. That said, there are benefits to moving out of the cloud, namely increased speed (because it downloads in the background) and storage for offline reading. Our favorite Windows app is that old warhorse, FeedDemon–it’s been around forever, it’s ugly but powerful and customizable as hell, it syncs with podcasts and lets you tag and share and search and institute alerts and about a billion other things.

For Mac, we recommend NetNewsWire, which is also made by NewsGator, the company behind FeedDemon. It’s a little bit prettier than FeedDemon, and it has the added benefit of syncing with its own iPhone and iPad apps. If you’re a Mac/iPhone user, the transition to using one of these apps is going to be much easier than if you use Windows or Android. FeedDemon and NetNewsWire are both free. Or maybe you’re on the other side: you only read RSS feeds when you’re out and about, with your iPad or iPhone or Android device. Aren’t you modern! There are lots of interesting readers out there for mobile that take advantage of those devices in cool ways, but for our money, the best is still Flipboard, that old stand-by. It’s very different from Google Reader in appearance; it looks like a crazy futuristic magazine, and sucks in your Facebook and Twitter accounts in addition to RSS feeds. It’s gorgeous and responsive and a pleasure to use, but setting it up won’t be painless. Flipboard does sync with Google Reader, but it puts all of your feeds into one section, which isn’t ideal. You’ll have to add them individually. This sucks. But it really is a great reader.

In the same vein is Pulse, which is slightly less pretty but still pretty, and Reeder, which is functionally more similar to Google Reader but which I find kind of unintuitive and inefficiently designed. 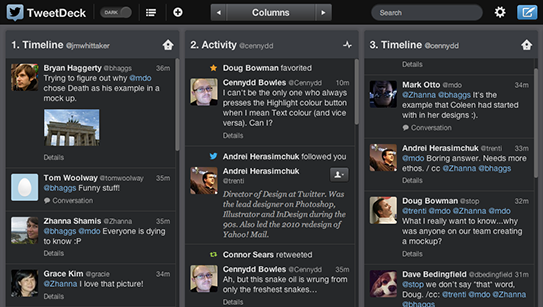 This is a reasonable thought! You can replace a lot of what was great about RSS with various Twitter work–creating lists for your favorite “feeds” (so you’d follow @PopSci instead of subscribing to PopSci’s RSS feed) is a surprisingly adequate replacement. That’s assuming you’re constantly staring at Twitter, which I am, because I am a Cool Dude, but won’t be quite for everyone. For news junkies, Twitter is definitely the fastest way to get news–but for more leisurely readers, maybe not. You can use Twitter in conjunction with Instapaper to save articles for later, offline reading–it takes a bit more effort, since you have to monitor Twitter, click a link to a page, and click the bookmarklet that’ll sync it with Instapaper–but you’re left with a pretty decent way to get to-the-minute news as well as longer, less timely stories. We recommend TweetDeck as the best power-user Twitter client, though it too will soon cease to exist.