What You Need to Know About Voting Machines

Since 2000, the government has tried to help democracy go digital. But is it working? 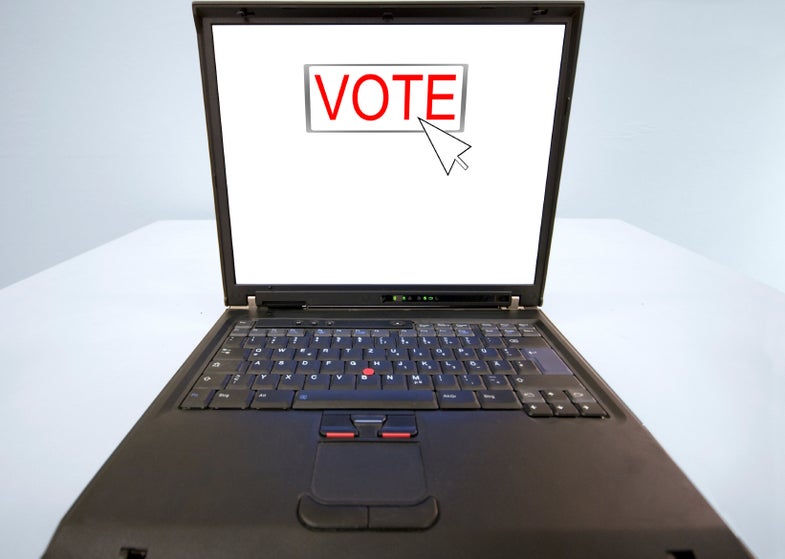 After several centuries of casting and counting ballots, it’s shocking that we still haven’t mastered what seems to be a simple task. But anyone who lived through the 2000 presidential election, in which a mishmash of flawed voting machines, contradictory county procedures, and unclear state laws in Florida led to the least reliable outcome in history, knows that 21st century voting is no better than the era when we shouted out our votes at the courthouse steps. After 2000, the Help America Vote Act (HAVA) was passed by Congress to help rid us of hanging chads and stolen ballots by subsidizing e-voting machines. But, it turns out, the 50,000 e-machines turned out to be even more of a headache than the chads, with widespread reports of crashes, lost votes, flipped votes, and even hacking. Voting and vote counting since then has been more than a little bit interesting.

After almost of decade of voting reform and increased scrutiny, have we come far enough in safeguarding the vote? The answer is a resounding question mark. Though the real answer will come on November 4, many parts of the country have made great strides to fix the problems caused by electronic voting machines. The great solution? Send the machines to the dump. According to CBS news, just one-third of Americans will vote on electronic machines. Fifty-five percent of the electorate will rely on a relatively old technology, optical scan machines, which leave a paper trail.

In fact, the states with the biggest voting headaches—Florida, where e-machines dropped 15 percent of the Sarasota vote several years ago, and Ohio, the e-voting problem child of 2004—have made the biggest steps back. Last year, the Sunshine state unplugged 30,000 touch screen e-voting machines in favor of optical scanners with a recountable paper trail. In Ohio, where questions about touch-screen voting set off investigations after the 2004 election, Secretary of State Jennifer Brunner reviewed the state’s entire voting system and forced its largest counties to abandon e-voting. This year, she has printed enough paper ballots to allow voting to continue if there are any glitches or irregularities with the machines. Other states that have devolved from e-voting to paper include California, where all but three counties now use optical scan machines, Iowa, which replaced its machines in April, and New Mexico which is now all paper.

But that leaves 24 states that still rely, at least partially, on e-voting. Just a few days from the election, tests have found problems in Texas, West Virginia (Obama votes flipped for McCain), and Tennessee (McCain votes flipped for Obama). Those are minor, fixable problems, but multiply them by hundreds of counties and they become significant. The possibility of a malicious hack is also very real. Last spring, Princeton professor Andrew Appel showed how a Sequoia voting machine could be hacked and loaded with vote-stealing software in less than seven minutes.

According to Michael Shamos at Carnegie Mellon, one in ten voting machines goofs up during any given election. Back-up systems, like simply printing a vote, have proven ineffective if the printers jam (and beg the question, why not simply use paper in the first place) or if the rolls of paper are improperly installed by less-than-tech-savvy poll workers.

The brief heyday of e-voting is, by most major indicators, over. The manufacturers of the machines report that no new counties have recently switched over to touch-screen voting. Last year, senator Bill Nelson submitted legislation that would outlaw e-voting in Federal elections by 2012 and would provide a $1 billion fund a return to optical scanners. The days of the e-vote are numbered. Then again, the saga of electronics and the electorate is far from over. If you thought e-voting was controversial, just wait until Internet voting is up and running.

America’s use of high-tech voting machines is nothing new, check it out here.