Rough Sketch: The Camera That Takes Photos 100 Times Bigger Than the Average Point-and-Shoot

“Our Aware-2 camera combines 98 small cameras with a spherical lens to take black-and-white gigapixel photographs. It set the record... 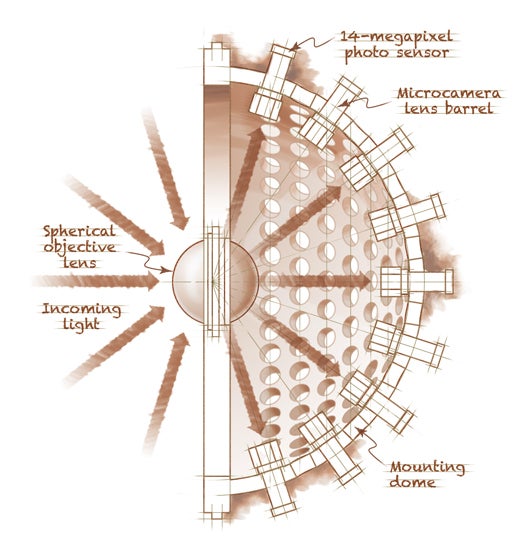 “Our Aware-2 camera combines 98 small cameras with a spherical lens to take black-and-white gigapixel photographs. It set the record for the largest digital snapshot by a terrestrial camera. One image from the camera, printed at 300 dots per inch, is 8 feet high by 16 feet long.

Traditional cameras bring a picture into perfect focus on a flat plane, but with an image this large, aberrations in the lens glass make that impossible. Instead, we use multiple lenses to bring our image into focus. First, a spherical objective lens captures the whole field of view. Then, the 98 microcameras automatically bring subregions of the image into perfect focus and exposure. The field of view of each 14-megapixel microcamera (that’s 10 times HD) overlaps with other microcameras’ fields of view, so we can stitch the images together into a full frame 120 degrees wide and 50 degrees tall.

The camera could have applications in surveillance and security, or even in nature photography. But we also expect the camera to change how we think about an image. Traditionally with photographs, you don’t feel like you’ve captured the world as fully as you experienced it. Here the image is much higher in resolution than what you’d see if you were actually there. I can imagine people saying, ‘This is very beautiful, but I wish I could see it through a camera.’ ”

—David Brady is a professor of photonics at Duke University