Add to the list of things robots now do better than humans: feel. Researchers at the U. of Southern California’s... 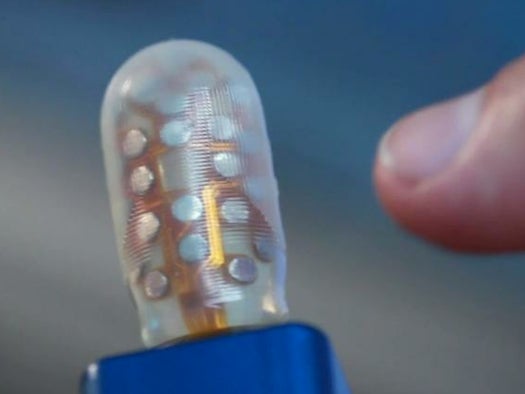 Add to the list of things robots now do better than humans: feel. Researchers at the U. of Southern California’s Viterbi School of Engineering have designed a robot finger that can outperform humans in the basic yet complex sensory task of touching. Their robot finger, equipped with a novel tactile sensor technology, is better at identifying and distinguishing between different materials and textures than human beings are.

Like most breakthroughs of this nature, the BioTac sensor (that’s its commercial name) is part hardware ingenuity, part software solution. The finger itself is very much like a human’s. A flexible, spongy skin complete with ridges (like a fingerprint) is stretched over a liquid filling. As it slides over a surface, the skin vibrates in ways that are distinctly tied to the texture of the material it is touching. A hydrophone inside the core of the finger picks up these vibrations and uses them to distinguish between materials.

On the software side, the researchers also strove to mimic the human process for evaluating textures. When humans attempt to identify something by touch, there are a huge number of exploratory movements he or she can choose from. Maybe a person prefers to rub certain kinds of textile materials between two fingers to pick up subtleties of cloth texture, while he or she appraises glassy or metallic surface differently. All this comes from prior experience with these materials or with similar materials.

The researchers recreated this way of discerning between exploratory movements via an algorithm that allows the robot to zero in on the best exploratory movements for appraising any material set in front of it at random. The result: when presented with 117 materials gathered from fabric, stationary, and hardware stores, the robot correctly identified them 95 percent of the time using no sensory input but touch. Only rarely did very similar textures confuse it. Humans simply aren’t that good at distinguishing between highly similar textures.

Of course, humans are discerning in other ways. For instance, humans can actually like or dislike a texture, perhaps finding it abrasive or comforting or warm as well. As such, BioTac sensors might best be used in human prostheses, where the tactile input from the sensor can be combined with other human sensory data as well as the human capacity to evaluate the external world beyond the way it feels. The paper describing this new sensor was published yesterday in the journal Frontiers in Neurorobotics, should any readers care to delve deeper.