Russia just set a speed record for a sprint that took place a long way from London. An unmanned Russian... 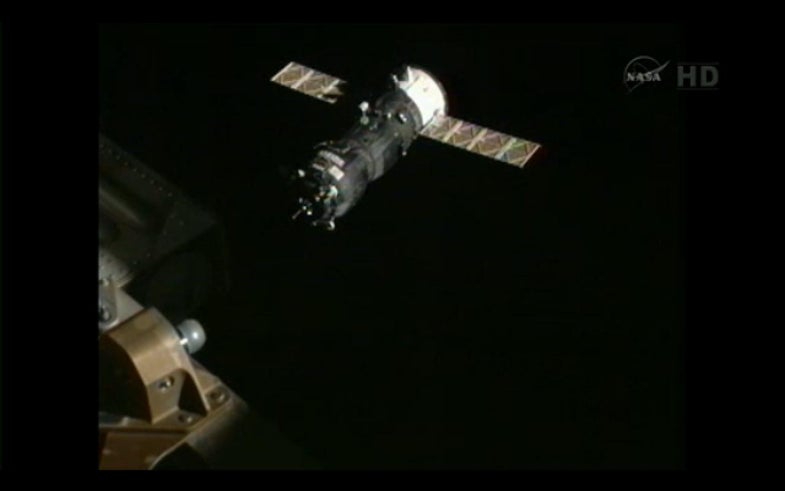 Russia just set a speed record for a sprint that took place a long way from London. An unmanned Russian Progress cargo ship launched from Baikonur Cosmodrome in Kazakhstan yesterday and docked with the International Space Station just six hours later, marking the first same-day docking ever performed at the ISS.

Launched aboard a Russian Soyuz rocket, the robotic Progress 48 performed additional firings of its own onboard engines early in the mission to boost it toward the ISS in a shorter period of time. This isn’t a completely novel maneuver–back in the Gemini days NASA docked spacecraft together on obit on the same day they were launched, and Russia has done the same. But it does require more precise calculations and a tighter margin of error.

Spacecraft usually spend two days catching up to the ISS in orbit, making the approach much slower (and safer). For same-day docking, spaceflight engineers have to execute that famous “striking a speeding bullet with a speeding bullet” math and physics. But it does come with unique benefits, especially if the maneuver is extended to manned Soyuz capsule missions as it is expected to be.

With manned missions, docking at the station within hours reduces the amount of food and water that must be packed aboard a spacecraft and provides for far greater crew comfort (spacious the Soyuz capsule is not). And of course, while no one is saying it out loud, it also could prove an important capability if something should go wrong aboard the station. Though there’s really no such thing as an emergency space launch–it takes time to fuel up a rocket and place a mission on a launchpad–the ability to shave two days off the arrival time of people or supplies at the ISS could make a difference should things ever get hairy up there.