The augmented reality future we were long ago promised has been slow to come around, perhaps restrained most by the... 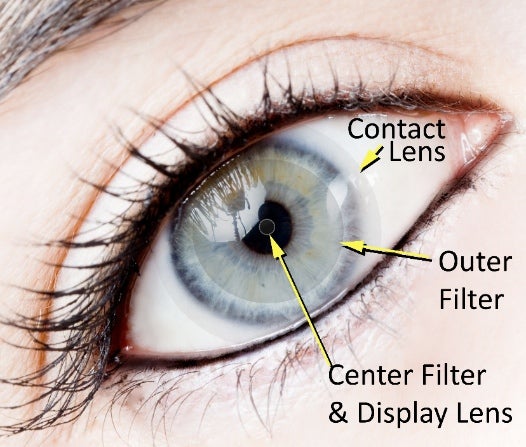 The augmented reality future we were long ago promised has been slow to come around, perhaps restrained most by the basic biology of our own eyes, which are unable to properly see detailed images placed very near the pupils. But via technology developed in part with a certain government agency, Washington-based Innovega has created a unique contact lens technology that allows the eye to focus on images projected very close to the eyes as well as objects in the real world beyond.

Simply put, the technology opens the door to augmented reality systems that don’t require some kind of bulky, virtual-reality-headset-from-the-’90s peripheral visor or helmet. Instead, Innovega’s tech relies on images protected on a normal-looking set of specs and a pair of nanotechnology-infused contact lenses that provide megapixel clarity of that up-close imagery while still allowing the eye to focus on the world beyond.

At least, so goes the company’s CES pitch, which you can judge for yourself below. We haven’t tested the product, so we can’t really speak to its awesomeness. But DARPA can. The Pentagon’s blue-sky research wing announced yesterday that Innovega has developed for the agency a new breed of contact lenses that allow “a wearer to view virtual and augmented reality images without the need for bulky apparatus” and that allow users to focus on both faraway objects and images placed very close to the eye.

For DARPA’s part, Innovega is working as part of the Soldier Centric Imaging via Computational Cameras (SCENICC) program, which aims to eliminate the intelligence, surveillance, and reconnaissance capability gap at the individual soldier level. Read: AR setups that plug individual soldiers right into drone feeds and other intel streams while still allowing them to maintain their peripheral vision and situational awareness. Meanwhile that could lead to more immersive 3-D television and gaming experiences for the rest of us. More tech detail via the video below.