E-books, iPads and Kindles may be the way of the future, but most of the world’s knowledge is still stored... 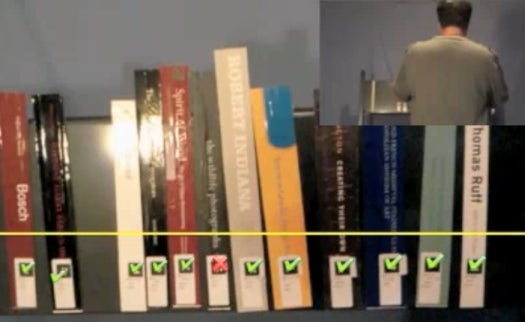 E-books, iPads and Kindles may be the way of the future, but most of the world’s knowledge is still stored in millions of good old paper books on library shelves. So researchers at Miami University have created an augmented reality app that makes all those books easier to organize. ShelvAR instantly analyzes an entire shelf, spots any misplaced books, and shows librarians the quickest way to put the books back in order.

ShelvAR consists of an Android app and a set of coded tags, representing call numbers, that are placed on books’ spines. When a librarian holds a smartphone or tablet camera up to a shelf, the app reads all the tags at once, thanks to a new algorithm that can decipher multiple patterns even though they’re small when viewed at a distance. Then the app uses a simple sorting method—at least for computers, which aren’t fazed by complex letter-digit combos like Q164 .G72 2009–to figure out the correct order and the shortest number of moves needed to achieve it. The phone’s screen displays red X’s over any misfiled books, along with arrows that show where they really belong.

The prototype app, built by computer science professor Bo Brinkman and research assistant Matt Hodges, has successfully analyzed a dozen books with half-inch tags. The team is now working on scaling up to 75 to 150 quarter-inch-thin books, so that they can scan a full shelf in one shot, and in December, they’ll test the app in part of the university library. Adding ShelvAR tags could save libraries time and money in the long run, since workers now do frequent shelf checks by hand.

If all goes well, a beta version of ShelvAR will be released next spring. Librarians are already envisioning other uses for the technology, Brinkmann tells us, such as displaying a star rating over recommended books or helping lost students find the book they’re looking for.