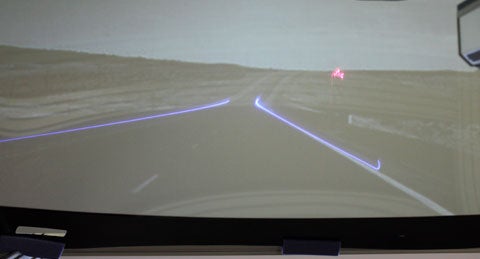 Distracted drivers may soon get some warnings from their windshield displays about road hazards such as children playing in the street or vehicles in the driver’s blind spot. General Motors has teamed up with university researchers to bring the concept to market around 2016, the New York Times reports.

The enhanced vision system would monitor a driver’s eye and head movements via sensors located both inside and outside the vehicle. The display would then overlay enhanced views of the road on top of the actual scene visible through the windshield. GM hopes that the augmented reality (AR) windshield display can allow drivers to view GPS directions without looking away from the road, and cope with difficult driving conditions in fog or at night.

Preliminary tests with an overlay screen showed that driver safety performance improved, as opposed to a head-down navigation system. Future versions of car windshields might have transparent phosphor coatings. Check out this Mashable video of the tech:

Other companies such as Light Blue Optics has also tinkered with head-up displays for rear-view or wing mirrors as well as windshields, including a nifty holographic version. And BMW already plans to roll out a very simple windshield display that shows the speed limit for any would-be speed demons.

GM’s navigation system could do one better by also highlighting or pointing to destinations, including specific buildings. Hopefully our cars will also automatically find parking spaces and display them on our head-up GPS by the time such technologies roll out.