NASA looks to the future as America's orbiters retire from service 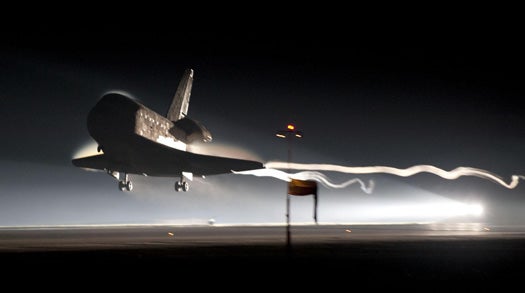 Atlantis’s final mission went as smoothly as a space shuttle mission can go, delivering one last round of supplies, logistics, and spare parts to the orbiting International Space Station. For Atlantis, it was probably a bit pedestrian–after all, it was the first shuttle to dock with the space station Mir and the final shuttle to service the Hubble Space Telescope, missions that at the time were anything but routine. It flew 33 total flights, docked with the ISS a dozen times, and logged roughly 125 million miles in orbit.

But enough has been said to eulogize Atlantis this morning, so we won’t pile on another tearful goodbye. Rather, we’ll send off Atlantis–and the shuttle program–via the words of NASA’s chief administrator Charles Bolden, who summed our sentiments up nicely this morning by looking toward the future:

“Children who dream of being astronauts today may not fly on the space shuttle … but, one day, they may walk on Mars. The future belongs to us. And just like those who came before us, we have an obligation to set an ambitious course and take an inspired nation along for the journey. I’m ready to get on with the next big challenge.”