Global Warming Opens a Long-Sought Shipping Route Through the Arctic

For a few short weeks last September, the Northwest and Northeast passages through the Arctic Ocean were simultaneously ice-free from... 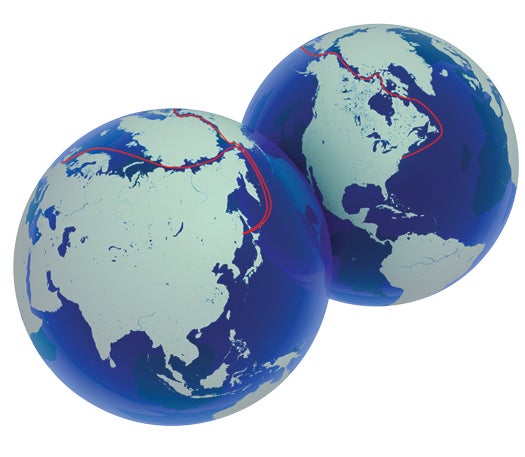 For a few short weeks last September, the Northwest and Northeast passages through the Arctic Ocean were simultaneously ice-free from end to end, the first such clearing in the time that satellites have monitored the region. Merchants have long sought routes through the ice packed waters that link the pacific and Atlantic. But researchers at the Naval postgraduate school in Monterey, California, say that we could now see an entire Arctic Ocean, not just passages along the coasts, with icefree summers, as soon as 2016.

That is a bleak environmental scenario. but it also means that cargo ships could shave thousands of miles off their journeys. Already, Russia is touting the Northeast Passage (a.k.a. the Northern Sea Route), which hugs its Arctic Coast, as a shorter, safer alternative to the pirate-infested waters near Egypt’s Suez Canal. The country’s fleet of for-hire, icebreaker escorts are on duty, and more are on order. although the major container shipping lines have yet to test the icy waters, more local cargo ships and tankers have been traversing the passage recently.

Equally desired is a shipping lane through the less-developed Northwest passage on the Canadian side of the Arctic. Although a labyrinth of frozen islands makes transit more challenging, China could get goods to the East coast of the U.S. without a lengthy detour through the Panama Canal or an overland trip by railroad. Similarly, travel between the Northwest U.S. and Europe would be 2,300 miles shorter. Many climate scientists say the Northwest could become passable on a regular basis by 2020.

Designers such as Aker Arctic, a Finnish firm, are developing ships that could travel the new routes even in the off-season, including icebreakers that can move sideways to blast channels for big cargo ships, and container ships with reinforced sterns that plow through ice rearend first so they don’t need an icebreaker to accompany them. Meanwhile, the Arctic Regional Hydrographic Commission, formed last October, is coordinating efforts to map the more than 90 percent of Arctic waters for which nautical charts are decades out of date or nonexistent.