A new alloy with unique properties can convert heat directly into electricity, according to researchers at the University of Minnesota.... 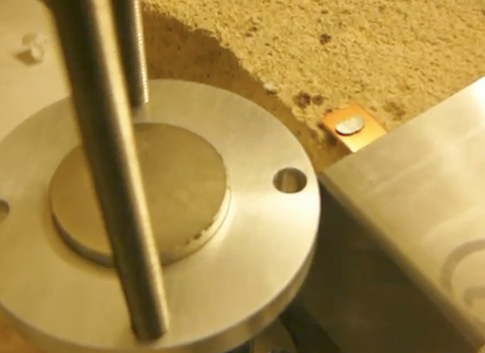 A new alloy with unique properties can convert heat directly into electricity, according to researchers at the University of Minnesota. The alloy, a multiferroic composite of nickel, cobalt, manganese and tin, can be either non-magnetic and highly magnetic, depending on its temperature.

Multiferroic materials possess both magnetism and ferroelectricity, or a permanent electric polarization. Materials with both of these properties are very rare; check out this explainer from the National Institute of Standards and Technology if you’re interested in the electron orbital arrangements that cause these phenomena.

In this case, the new alloy — Ni45Co5Mn40Sn10 — undergoes a reversible phase transformation, in which one type of solid turns into another type of solid when the temperature changes, according to a news release from the University of Minnesota. Specifically, the alloy goes from being non-magnetic to highly magnetized. The temperature only needs to be raised a small amount for this to happen.

When the warmed alloy is placed near a permanent magnet, like a rare-earth magnet, the alloy’s magnetic force increases suddenly and dramatically. This produces a current in a surrounding coil, according to the researchers, led by aerospace engineering professor Richard James. Watch a piece of the alloy leap over to a permanent magnet in the video clip below.

A process called hysteresis causes some of the heat energy to be lost, but this new alloy has a low hysteresis, the researchers say. Because of this, it could be used to convert waste heat energy into large amounts of electricity.

One obvious use for this material would be in the exhaust pipes of vehicles. Several automakers are already working on heat transfer devices that can convert a car’s hot exhaust into usable electricity; General Motors is using alloys called skutterudites, which are cobalt-arsenide materials doped with rare earths.

Rare earth magnets are already a necessity in many hybrid car batteries, so heat-capture devices made of the new multiferroic compound could be placed near the magnets.

The material could also be used in power plants or even ocean thermal energy generators, the researchers said.

A paper on the alloy was published in the journal Advanced Energy Materials.