The Extreme Light Infrastructure will be built in Eastern Europe 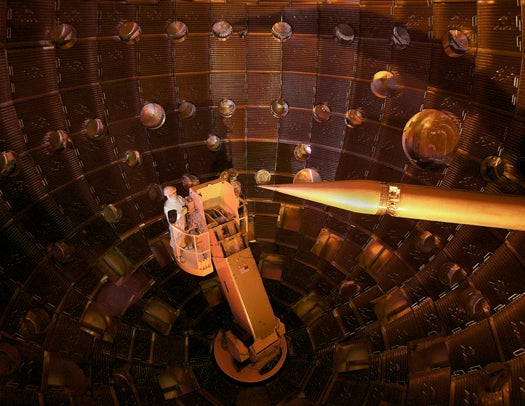 Who knew it would take so long to approve a project to build the world’s most powerful lasers? Lasers are awesome. But after reconciling some paltry funding issues, the European Commission finally approved the Extreme Light Infrastructure (ELI) project, which plans to build three superlasers by 2015.

The lasers will be the first to operate in the exawatt scale–a quintillion watts. That’s about a million times more powerful than 10 billion 100-watt lightbulbs. And a fourth superlaser should be forthcoming, one with beams twice the power of these three. This is the laser that was theorized to be the most powerful laser possible.

The list of implications for this never-before-seen technology is long, reaching into cancer diagnosis and treatment, elimination of nuclear waste, broadening of the technology industry, and expansion of nanoscience and molecular chemistry research.

Several countries competed for the honor of hosting the laser. ELI’s most important research laser will find its home in the Czech Republic while the other two will reside in Hungary and Romania.