Like Schrödinger's cat, teleported light is both dead and alive 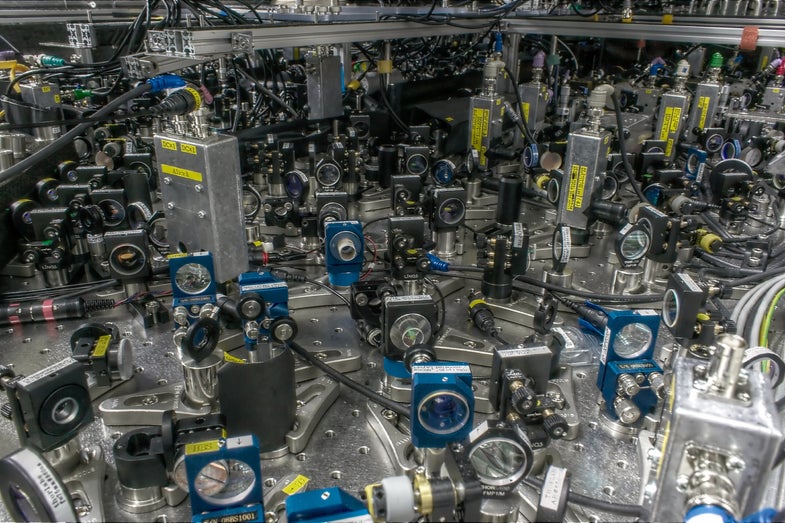 In a real-life use of Schrödinger’s theoretical paradoxical cat, researchers report that they were able to quickly transfer a complex set of quantum information while preserving its integrity. The information, in the form of light, was manipulated in such a way that it existed in two states at the same time, and it was destroyed in one spot and recreated in another. The new teleportation breakthrough is a major step toward building safe, effective quantum computers.

No felines were harmed in the making of this experiment, which actually studied wave packets of light that existed in a state of quantum superposition, meaning they existed in two different phases simultaneously. This phenomenon is described in Erwin Schrodinger’s quantum mechanics thought experiment, in which a cat is simultaneously dead and alive, depending on the state of a subatomic particle.

In this experiment, researchers in Australia and Japan were able to transfer quantum information from one place to another without having to physically move it. It was destroyed in one place and instantly resurrected in another, “alive” again and unchanged. This is a major advance, as previous teleportation experiments were either very slow or caused some information to be lost.

The team employed a mind-boggling set of quantum manipulation techniques to achieve this, including squeezing, photon subtraction, entanglement and homodyne detection. The photo above depicts their device, nicknamed the Teleporter, in the lab of Akira Furusawa at the University of Tokyo.

The results pave the way for high-speed, high-fidelity transmission of information, according to Elanor Huntington, a professor at the University of New South Wales in Australia who was part of the study.

“If we can do this, we can do just about any form of communication needed for any quantum technology,” she said in a news release.

Instead of using ones and zeroes, quantum computers store data as qubits, which can represent one and zero simultaneously. This superposition enables the computers to solve multiple problems at once. The new, faster teleportation process means scientists can move blocks of this quantum information around within a computer or across a network, Huntington said.

Optics researcher Philippe Grangier at the Institut d’Optique in Palaiseau, France, said it was a major breakthrough.

“It shows that the controlled manipulation of quantum objects has progressed steadily and achieved objectives that seemed impossible just a few years ago,” he wrote in an editorial that accompanies the study.

The results were published today in the journal Science.