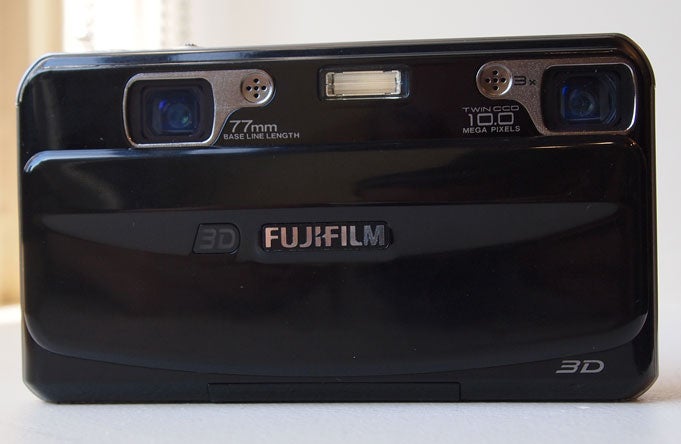 In the past, in order to take a stereoscopic 3D photo, photogs had to fashion their own hacked shooting rigs of conjoined cameras wired into a central shutter. But even with all that, 3D shots taken with those setups still can’t be seen with the naked eye. Fujifilm’s Real 3D system, which is available in the U.S. today, includes a camera, digital frame, and print center that creates 3D images you can see without those flimsy glasses.

First up, the FinePix Real 3D W1 digital camera ($600). Just like costly stereoscopic rigs, the W1 has two side-by-side 10-megapixel lenses separated about as far as human eyes (about 2.75 inches) that capture two images simultaneously focused on the same point in front of the camera. The two shots are instantly combined inside the camera to create a MPO-JPEG (the “MP” is for “multi-picture”), instead of your standard JPEG. It also captures 3D movies in stereo 3D-AVI at 640-by-480 or 320-by-240 pixels at 30 frames per second.

The real trick, though, is in the screen: the 2.8-inch LCD uses directional light control to display the MPO and 3D-AVI files in 3D that’s visible with the naked eye. Directional light control displays two different sets of light, one pointed at your right eye and other at your left, that flash quickly enough back and forth to give the illusion of depth.

All this happens quickly in 3D auto mode, but there also manual settings to tinker with. Individual Shutter 3D, for example, snaps only one shot at a time, and displays a ghost of the first image on the screen to guide the second snap. The W1 can also take regular 2D photos, either one at a time or two at once. The dual-shot feature comes in handy for landscape or panorama shooting, though there’s no in-camera editing option to stitch the shots together on the fly.

Fuji’s system projects images and video in such a way that your eyes and brain are tricked into seeing in 3D.

I had an hour or so to play around with the W1 last week, and it’s impressive. The camera is heavy, but it’s metal body feels very sturdy despite its brick-like-ness. Snaps I took of my coffee cup and danish popped on the LCD just the way Fuji’s engineers said they would. I also had fun tinkering with the image ghosting (or parallax) controls, which let you control how much overlap there is between the two JPEGs to determine what part of the image you want to appear in 3D; I was able to shift focus from my mug to a camera in the background, for example

Fuji has also created options for off-camera, glasses-free viewing. The V1 Digital Viewer ($500) is an 8-inch LCD display that uses a parallax viewing system to render in 3D. This system, like the camera LCD directional light, points light at each eye individually, but in a slightly different way. The viewer has a second LCD overlaid that only displays thin, vertical black lines that quickly flash on and off on the right and left side. Once you find the screen’s “sweet spot,” (which could take a bit of bobbing your head back and forth, as it did for me) images and video appear to pop. 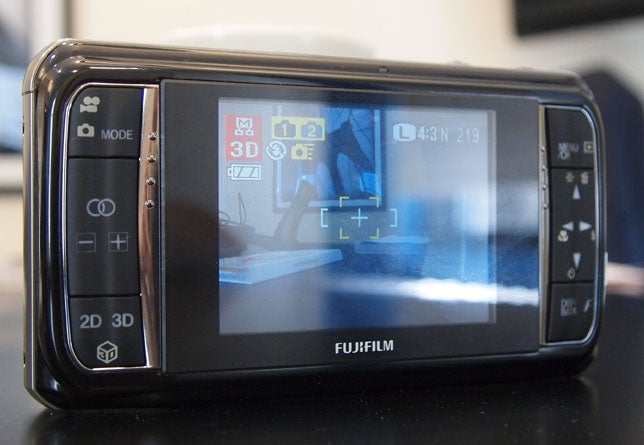 If you’re old-fashioned and want prints, you can order then for about $7 each through SeeHere.com. The 5-by-7 prints have the textured feel of holograms. Those raised ridges use what’s called binocular disparity to isolate parts of the image that get seen by each eye individually.

Fuji has also partnered with Nvidia to bring the Real 3D system to computers — albeit with the glasses. With the help of Nvidia 3D Vision glasses, a 120-Hz monitor, and a current Nvidia graphics card, you can view the W1’s MPO and 3D-AVI files on your PC.