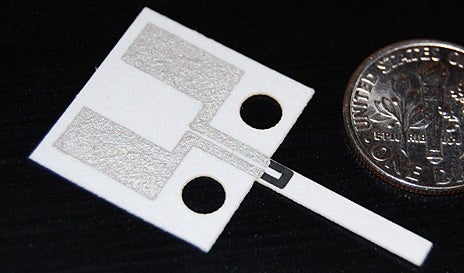 Harvard professor George Whitesides developed the paper accelerometers using chromatography paper, tiny sliver and carbon contact pads, and vinyl stencils. The process is so cheap and easy that the sensors could be disposable.

Accelerometers are found in everything from car airbag systems to bridges to iPhones, where they basically measure the g-forces an object is experiencing. This information is relayed to other systems. In a car, for instance, acceleration forces might trigger airbags to deploy. The NFL is researching the use of accelerometers in football helmets to study head impacts.

Most MEMS accelerometers are silicon-based, and fabricating them takes several days of work inside clean rooms. But building the paper ones just requires some scissors, glue and thick paper, according to IEEE. The paper sensor, which is a bit larger than a dime, consists of a cantilever cut out of chromatography paper, which is used for chemistry experiments. It bends under force and stresses a carbon piece, which changes the piece’s resistance. Click through to IEEE for a description of how this works.

The best thing about the paper sensors is the other types of substrates they might enable, according to Kevin Dowling, vice president for research and development at mc10, a flexible-electronics start-up in Cambridge, Mass. “If you can make such sensors on paper, you can make them on stretchable, biocompatible substrates like silicone, and then you can mimic the properties of skin,” he told IEEE.

The paper accelerometer is not as sensitive as its silicon counterparts, however; they can measure teeny forces smaller than 80 micronewtons, and the paper only reaches about 120 micronewtons. Still, it’s an impressive feat for something made out of paper — really, who even uses that stuff anymore?