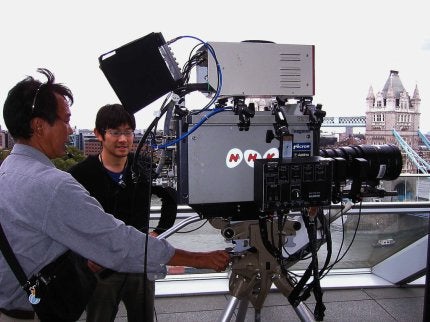 Super Hi-Vision, also known as SHV, Ultra HDTV, 8K, and simply 4320p, is the future of high-def video. With a whopping 16 times more pixels than even 1080p, SHV is dangerously sharp, with lenses and TVs having to be freshly invented to do it justice. The tech is likely a decade away from wide adoption (and even then, probably not in the States), but progress is being made swiftly: The BBC and Japan’s NHK teamed up this week for the first SHV broadcast to be made over the Internet, a performance by British band The Charlatans.

SHV, proposed as the next standard by the BBC, NHK, and Italy’s RAI, is highly experimental–when it was demonstrated back in 2003, it used 16 separate HDTV cameras to capture the demo video. These days, there are three cameras, all developed by NHK, that can handle the video’s insane 7680 x 4320 resolution, but for this broadcast, the NHK had to create a customized lens and a 103-inch plasma screen for viewers. Even that screen doesn’t quite have the pixel density to display the video properly.

The bigger problem is moving that much data at a reasonable speed. To give you an idea of how much data we’re talking about, a 20-minute video requires about four terabytes of space. Other SHV broadcasts have had to drastically compress video and audio to fit the constraints of the connection. SHV requires a lightning-fast 24Gbps link, which isn’t widely available; a demonstration in 2006 compressed the 24Gbps down to 180-600Mbps (which, we should add, is still crazily fast compared to home Internet in the States. Verizon’s FiOS only gets about 50-60Mbps, and that’s several times faster than most cable services).

This was the first true SHV mock-broadcast, in that it actually used a 24Gbps link to beam the video from the UK to Tokyo. Here’s a behind-the-scenes video from the BBC:

NHK hopes the format will start rolling out in bits and pieces, possibly with the first bits coming as soon as the 2012 Olympics, both for BBC archives and possibly for giant public screens. So how long before you can get Super Hi-Vision in your living room? NHK aims to start broadcasting by 2020–although that might be only in Japan, or other countries with equivalent Internet speeds. North America has been quite slow in improving broadband speeds, partly due to infrastructure, partly to cost, and partly because the US is a massive country. But hopefully we’ll have excruciatingly sharp ultra-high-def broadcasts within a couple decades, because 1080p just feels so…insignificant, compared to 4320p.