Why You Should Keep Your Face Away From Big Fireworks

This unlucky blast-test dummy was the star of the Consumer Product Safety Commission’s annual July press event on the National... 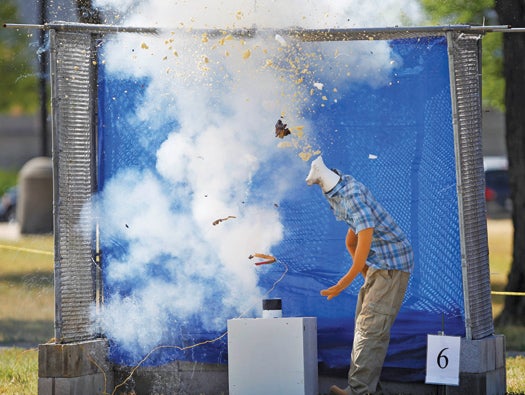 A mannequin's head is blown up as an "aerial display" fireworks explodes during the Consumer Product Safety Commission demonstration on the Capitol grounds in Washington, Tuesday, June 29, 2010, to highlight consumers putting safety in play if fireworks are part of their Fourth of July celebrations. Manuel Balce Ceneta
SHARE

This unlucky blast-test dummy was the star of the Consumer Product Safety Commission’s annual July press event on the National Mall in Washington. The commission, which regulates fireworks’ explosive power, here vividly shows the potential of pyrotechnics for bodily harm. The mannequin’s Styrofoam head, filled with cornmeal to simulate brains, was close to a professional-grade explosive, with a “quick match” fuse that burns almost instantaneously. (Consumer-grade pyrotechnics have a six-second fuse.)

The commission estimates that fireworks were responsible for 9,000 injuries in the U.S. last year. Most of the injuries from firecrackers and sparklers are burns and cuts, but the decapitation demonstration is a reminder that the night can end in other ways.