Cell phones come with all kinds of applications these days, but researchers at MIT have developed one with the power... 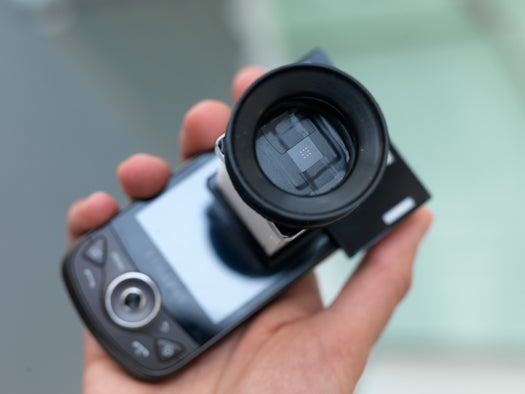 Cell phones come with all kinds of applications these days, but researchers at MIT have developed one with the power to change more than just a Facebook status. Using a small plastic lens that clips to a cell phone screen, the software can determine a person’s vision prescription on the spot, making quick, inexpensive diagnoses of refractive vision errors a reality, especially in remote areas of the world.

The test itself is simple. The patient looks through a lens in the clip-on device at the cell phone’s screen, using the arrow keys on the phone’s keypad to move sets of parallel green and red lines around until they overlap. Do this eight times for each eye and the software in the phone can determine your prescription. The entire process takes no more than two minutes. (For a very thorough explanation of how the technology works, check out the video below.)

This method stands in serious contrast to other methods of testing for vision errors, like the phoropter – that archaic-looking device with all the rotating lens arrays attached to it – or the laser aberrometer, both of which are expensive and require a specialist to operate. Yet NETRA (short for Near-Eye Tool for Refractive Assessment) has achieved accuracy comparable to a standard aberrometer in initial tests. Not to mention it requires no real training to operate, and the lens attachment costs just $1-2 to make. If manufactured in bulk, NETRA’s creators think that cost might drop to just a few cents per unit.

The researchers will test the device in Boston this summer and hopefully will put it to the real test in developing nations sometime shortly thereafter. Considering refractive errors are the second-leading cause of blindness affecting two billion people worldwide, it shouldn’t be terribly hard to find a market.