There are currently more than 60,000 taxis cruising around Japan, a number that accounts for 20 percent of the country’s … Continued 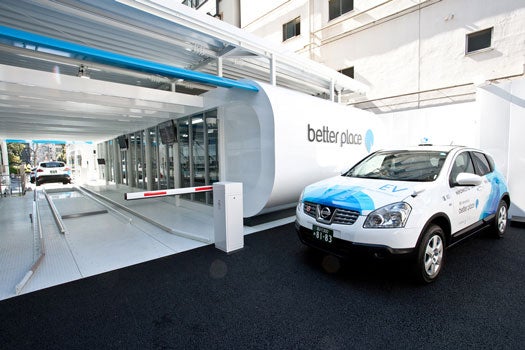 There are currently more than 60,000 taxis cruising around Japan, a number that accounts for 20 percent of the country’s CO2 emissions. To promote environmental health, the Japanese government has joined with Better Place, a US firm specializing in electric vehicle development, to come up with a solution: electric taxis powered by replaceable batteries. Today, three of the taxis will begin their circuit during a 90-day experiment funded by Japan’s energy agency.

In a blog entry written for Better Place’s website, Kiyota Fujii, president of the firm’s Japan unit, explains how the vehicles run continuously. Unlike many other EVs, which need long recharging periods after half a day’s work, Better Place’s taxis can make periodic stops at battery-exchanging stations. It takes less time to switch the batteries than it does to fill a conventional vehicle with gasoline.

Nihon Kotsu, Japan’s largest taxi operator, has also partnered up with Better Place to provide drivers for the vehicles. Fujii said that he is certain that the city’s experiment will encourage automakers around the world to follow suit by producing eco-friendly, economically-sustainable vehicles en masse.