Everything from televisions to smartphones and robots will obey consumers' thoughts 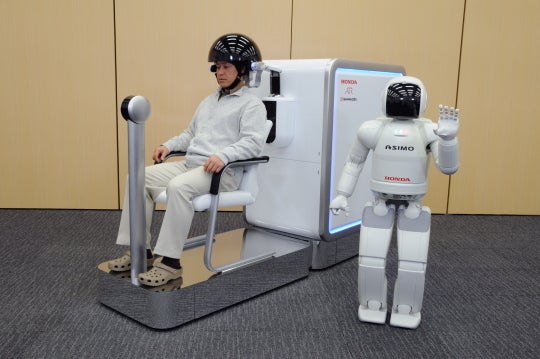 Japan’s insatiable love for robots and mind-reading technology has converged in the form of a new government-industry partnership. That means Japanese consumers can look forward to robots and electronics controllable by thought alone within a decade, according to Agence France-Presse.

The Nikkei daily first reported on this development yesterday by citing unnamed government sources, and so technical details remain a bit murky. Any such devices would supposedly use sensor-mounted headsets to analyze the electrical signals and brain blood-flow patterns of users.

The lack of specs has not prevented the collective sci-fi imagination of said sources from running wild. Future mind-controlled devices would include television sets and smart phones which compose text messages by thought. That’s not unlike some brain-interface devices already slated to hit the market, but presumably they’d be much less expensive for daily-use items.

Other possible applications include a car navigation system which searches for restaurants when it detects the driver thinking on his or her empty stomach, and air-conditioners which adjust the temperature based on feeling too warm or cold. That’s a huge stretch by today’s standards.

Of course, the headsets would also allow the elderly or disabled to communicate with robot servitors and alert them to when help is required. We trust that won’t lead to a future with the first robot-assisted homicide, but at least current mind-controlled fighting robots leave little to worry about.

We previously investigated the latest challenges of mind-reading technology in an extensive feature, which involves some serious numbers crunching and a few good brain scanners. Japan’s upcoming effort could put some serious financial muscle behind this booming area of research, given the involvement of corporate giants such as Toyota, Honda and Hitachi, as well as top universities and research institutions.

Perhaps a mind-controlled future still sounds creepy to some, even if it’s the consumer presumably doing the controlling. But at least it’s a different approach from Intel’s vision of consumer brain implants.