Bad news on the Constellation front this morning: the Orlando Sentinel reports this morning that sources inside the Obama administration... 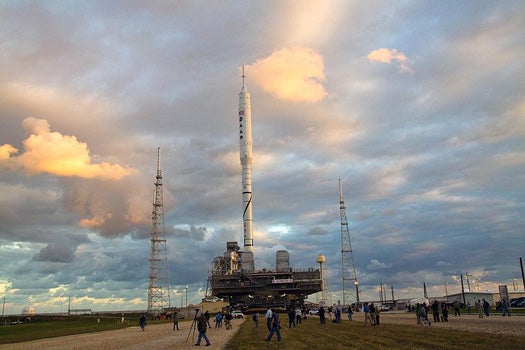 Bad news on the Constellation front this morning: the Orlando Sentinel reports this morning that sources inside the Obama administration say the budget proposal to be released Monday contains no money for the Constellation program or the Ares I rocket that was supposed to replace the space shuttle as America’s means to shuttle humans to space. Also axed: the Ares V cargo rocket intended to ferry fuel and supplies necessary for America’s return to the moon.

Lunar landers, moon bases and a shot at a future manned mission to Mars are all conspicuously absent from the budget’s long-term goals.

So what is in the budget? According to administration insiders, agency officials, industry wonks and sources on The Hill, the Obama White House wants NASA to pursue a “heavy-lift” rocket capable of taking humans and robots beyond low-earth orbit at some faraway, yet-to-be-determined date. The White House also wants NASA to focus more attention on climate change research and monitoring and developing programs enabling future exploration of asteroids and the inner solar system. A 2020 life extension for the ISS is also expected.

It’s important to note that all of these “insiders” spoke to reporters on a condition of anonymity; leaking budget details several days before their official release is now way to ensure job security. But the details that are leaking, if true, seem to spell an end to NASA’s aspirations to recreate its glory days of Apollo with modern, vastly superior technology. And those of us who were stoked about the idea can forget about a permanent moon base.

Space shuttle duties – rotating crew at the ISS, putting satellites into orbit, etc. – will likely fall to other nations or to private enterprise. But while it’s fair to say that perhaps we don’t need to go back to the moon, the greater fear is that America will lose its place at the head of the table. Just yesterday Reuters noted that Russia, the first nation to launch a satellite into orbit and a man into space, has lost its standing as a scientific powerhouse for lack of research and development. Nations like China and South Korea are racing to close the aeronautical gap, and India has green-lit its first manned mission to space in 2016, a year when it appears the U.S. Space Agency will be measuring glacial ice and ocean currents.