A manned mission to an asteroid sounds far-fetched, but a new study says it will soon be possible

To see how to fly into an asteroid in three easy steps, launch the gallery here.

Here we are, nearly eight years into the 21st century, and the most spectacular manned mission NASA can pull off is a trip to the International Space Station, a mere 210 miles above the Earth. Even the most ambitious part of NASA’s current plans for human spaceflight involves visiting a celestial body we’ve already been to: the moon. Astronauts, space buffs and an unimpressed public hunger for space exploration that’s more dramatic, more heroic, more new. Something like, say, landing astronauts on a distant rock hurtling through space at 15 miles per second.

That’s exactly the kind of trip NASA has been studying. In fact, scientists at the space agency recently determined that a manned mission to a near-Earth asteroid would be possible using technology being developed today. The mission wouldn’t be easy. A crew of two or three would spend months riding in a cramped spacecraft before reaching their barren, nearly gravity-free target. That such a mission is even being considered, though, says a lot about the versatility of NASA’s next fleet of spacecraft and the ambitions the agency has for them. If nothing else, it’s a signal that space exploration could soon get much more exciting.

**The Allure of an Asteroid
**
This wouldn’t be our first trip to an asteroid. We’ve been visiting them by proxy for years now, using unmanned space probes. In 2000 NASA’s NEAR Shoemaker spacecraft arrived at 433 Eros, which a century earlier became the first near-Earth asteroid known to man; five years later, the Japanese Hayabusa probe touched down on asteroid 25143 Itokawa.

Yet unmanned probes have their limitations. NEAR Shoemaker and Hayabusa gathered a good deal of data, but we still don’t know the exact composition and internal structure of the asteroids they visited. And although Hayabusa was designed to collect two small samples from Itokawa, it’s doubtful the probe will actually have anything onboard when it returns in 2010.

Humans, however, could be much more effective. Unlike robots, we adapt to our environment in real time. “We spend weeks at a rock with a Mars rover, trying to determine what it is,” says Rob Landis, an engineer at NASA’s Johnson Space Center and one of the co-leaders of the mission feasibility study. “An astronaut could make that determination in a matter of seconds.”

A human crew could travel across an asteroid more intelligently than a robot, making it easier to deploy scientific instruments, collect samples, and zero in on the areas of greatest interest. “No doubt, on a human mission we would characterize an asteroid better than we ever have,” says Bruce Betts, director of projects for the Planetary Society.

Plenty of characterization needs to be done. While most asteroids are a safe distance from Earth (in an approximately 190-million-mile-wide expanse between Mars and Jupiter), Jupiter’s gravitational tug and, less often, collisions between asteroids can kick these objects into orbits that pass uncomfortably close to Earth. The 270-meter-wide asteroid 99942 Apophis, for example, will pass within roughly 24,000 miles of Earth in 2029, and could come back for a direct hit in 2036.

And if we’re to have any hope of deflecting asteroids, we need to know a lot more about them than we do now. First off: What, exactly, are they made of? Measurements taken by Hayabusa indicate that 40 percent of Itokawa’s volume is empty space. If some asteroids are truly this porous, that’s helpful information for any plan to destroy or deflect an Earth-bound object.

Averting the apocalypse isn’t the only reason to study near-Earth asteroids, though. They could be floating gold mines for future deep-space expeditions. Preliminary observations suggest that some asteroids are rich in useful minerals and, better yet, frozen water-the most valuable resource a space traveler could hope to find. If water could be extracted from asteroids, it could not only be used for drinking, but also broken down into oxygen for breathing and hydrogen for rocket fuel. “It might be an ultimate way to get to Mars,” Landis says.

**Far beyond the Moon
**
Forty-one years ago, a scientist at Northrop (now Northrop Grumman) proposed using moon rockets to go to an asteroid. In some ways, NASA’s latest plan is similar; it too relies on spacecraft designed for lunar travel-the vehicles belonging to the Constellation program, which NASA is building to replace the shuttle and then go to the moon and beyond.

That lack of gravity, however, means that the first person to reach an asteroid will not take one giant leap for mankind, and he will not drive a dune buggy. “You’re going to be wearing a backpack and flying around,” says Rusty Schweickart, an Apollo 9 astronaut who is now chairman of the B612 Foundation, whose goal is “to significantly alter the orbit of an asteroid, in a controlled manner, by 2015.” Astronauts might explore the asteroid from inside their spacecraft using remotely controlled instruments, or they might anchor their spacecraft to the surface of the asteroid by firing hooks into the object and reeling themselves in.

The biggest logistical hurdle is the sheer distance involved. It takes a few days to travel the 238,855 miles to the moon, but it will take more than a month to cover the distance of up to 4.5 million miles separating us from just about any asteroid of interest. The crew of two or three will live in their small quarters for several months. Psychological experiments and historical precedent show that isolation and boredom can mentally break an otherwise sane person; NASA will have to find a way to keep an asteroid-bound crew from losing their minds. It will also have to engineer a means to shelter the astronauts from the intense cosmic radiation found outside the protection of Earth’s magnetic field.

Most ominously, though, there’s this little wrinkle: If anything goes wrong out there for an asteroid-bound space traveler, there’s almost no chance of rescue.

**Destination: Unknown
**
Which asteroids would we visit? “You need an asteroid that’s in an orbit very similar to the orbit of the Earth,” says David Morrison, a senior scientist at the NASA Astrobiology Institute. “There aren’t many, so we would be quite dependent on carrying out a new survey.” The ideal target asteroid will also be at least a couple hundred meters in diameter, will have a very slow rotation of 10 hours or more, and will have the potential to come too close to Earth for comfort. Scientists suspect approximately 1,000 asteroids meet these criteria-but we have yet to find them.

In 2005, Congress ordered NASA to develop a program to detect, track, catalog, and characterize, by the end of 2020, 90 percent of all near-Earth objects (an expanded category that includes comets as well as asteroids) 140 meters in diameter and larger. The hitch: Right now, NASA doesn’t have the budget to get it done by that deadline.

The interplay between Congress and NASA brings up the more terrestrial matter of politics. The stated goal of President George Bush’s administration is to launch an “extended” moon mission by 2020 and, later, to build a permanent moon base that could function as a springboard for a manned mission to Mars. That could all change after next year’s election, however. A new administration could divert money from human space exploration to any number of other projects-say, satellite-based climate science. “I don’t think that the Vision”-the Bush administration’s plan for a new era of human space exploration-“as written today is likely to survive the election, even if a Republican is elected,” says Robert Zubrin, president of the Mars Society.

Then again, some experts believe the Constellation program will move forward no matter who wins in ’08; if it doesn’t, NASA won’t have any spacecraft after the shuttle retires. And although the feasibility study doesn’t mean we’re headed to an asteroid soon, it does tell us that if we decide to go, we can get there. So if, say, we find one day that we need to visit 99942 Apophis to find the best way to knock it off a collision course with Earth, or if we need a refueling station for astronauts headed for Mars, we might be in luck.

Dawn Stover is PopSci’s_ editor at large. She lives in White Salmon, Washington, where she has a clear view of the night skies._ 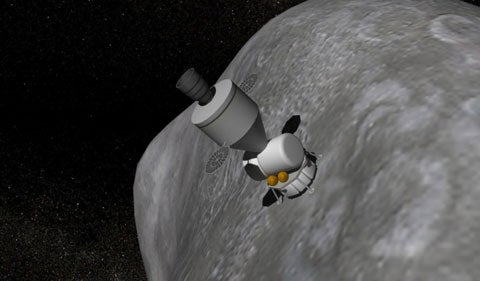 Upon arrival, the spacecraft hovers above the asteroid and matches its rotation. If the asteroid has a stable, penetrable surface, the astronauts could fire tethers into it to anchor the craft. They could then leave the craft and pull themselves to the surface or use a robotic arm to drill and collect samples. 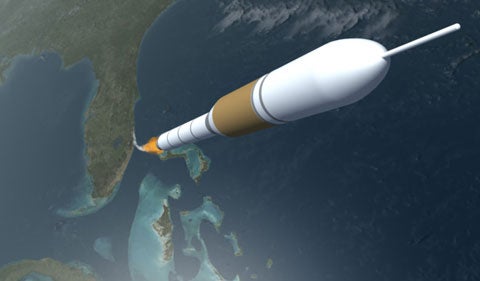 An Ares I rocket [left] launches the astronauts and their Orion crew capsule into orbit. By this point, the Earth Departure Stage (EDS), which will propel the astronauts toward their deep-space destination, is already in orbit, having been launched into space 90 minutes earlier by an unmanned Ares V rocket. 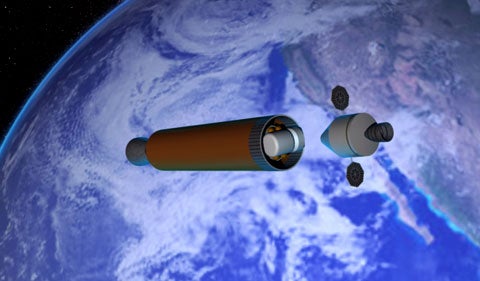 Once in orbit, the Orion crew capsule docks with the EDS. The “stacked” segments then orbit Earth until they reach the right position for departure. When it’s time to go, the EDS fires its engines and sends the stack hurtling toward its asteroid destination. During the cruise to the asteroid, the crew jettisons the EDS. 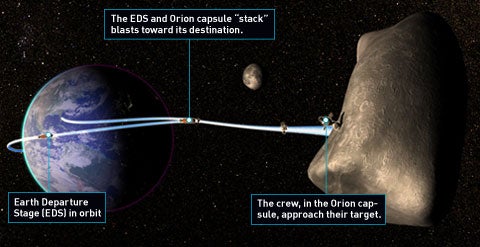 How to Fly to an Asteroid in Three Easy Steps

NASA conducted a study to determine the feasibility of sending astronauts to an asteroid and hired the California computer-simulation company DigitalSpace to help visualize the mission. One possibility: Get there using the Ares I and V rockets being developed for NASA’s Constellation program. Here’s how it would work.
feature