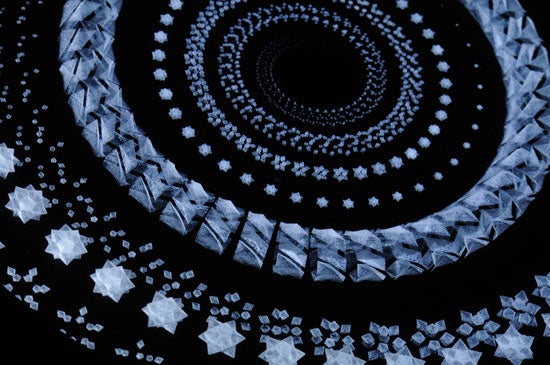 You may remember playing with zoetropes as a kid, or at least their flipbook equivalents that converted a series of 2D stickman images into an animated story. Such devices proved popular from the Victorian era all the way up until movies became all the rage in the 20th century. Now there’s the 21st century version — a 3-D zoetrope that creates a spiraling animated ilusion.

The neat artistic display comes courtesy of Woohun Lee and JinHa Seong of the Korea Advanced Institute of Science and Technology (KAIST). They first created hundreds of animated geometric objects using 3-D animation software, and then engraved those object models into a crystal disc by using sub-surface laser engraving.

That crystal disc ended up sitting on a motor that spins at 120 rpm, in a circular bar stool configuration. A group of 25 LED lights surrounding the crystal disc help create the animation by blinking on and off at 80 hertz.

People can play with the device based on a touch sensor array, which allows users to control the direction of the spinning spiral and its brightness.

Even film animator greats love these types of 3-D zoetropes –- Hayao Miyazaki’s Ghibli museum has one on display in Bouncing Totoro, and Pixar used one for Toy Story. Check out the magic here before you head out to catch James Cameron’s Avatar, just to keep things in perspective.