Making Powerful, Lightweight Batteries From Nothing But Nanotube Ink and Paper

Reading the electronic-media narrative as it plays out in many popular tech and news blogs, one would think we are... 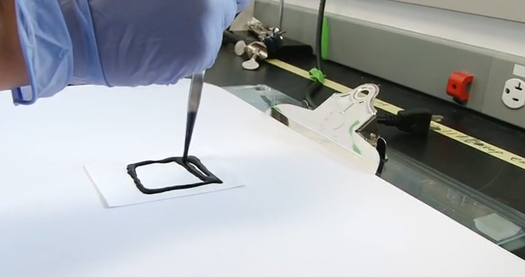 Reading the electronic-media narrative as it plays out in many popular tech and news blogs, one would think we are hurtling toward a future where paper is all but unnecessary. But a new development in battery technology could bring paper right back around to its former place of prominence, using it to power the very digital devices — smartphones, Kindles, laptops, etc. — that are increasingly replacing print.

By coating regular copier paper in ink made of carbon nanotubes and silver nanowires, Stanford researchers have created highly conductive storage devices that can be bent, folded, and wrapped around other surfaces (energy-storing wallpaper, anyone?). The carbon nanotube ink adheres to the surface of the paper just like normal ink would, making paper the ideal vehicle for these thin, lightweight storage devices.

Since earlier research has shown that silicon nanowire batteries can be up to 10 times more powerful than lithium-ion batteries, researchers are hopeful the paper batteries will be able to power everything from automobiles to laptops to phones with smaller, lighter, more powerful and longer-lasting batteries. The method can also create simple supercapacitors with large surface areas that allow rapid energy discharge, a requirement for automobile power sources that lithium-ion batteries have trouble satisfying.

All of that would just be more pie-in-the-sky battery research if it were not for this: the paper battery technology is basically market-ready. That’s not to say that researchers won’t need some time to iron out the kinks, but power sources based on this technology could be commercialized very soon compared to a lot of the nano-noise circulating in scientific circles. The fact that the process is also very cheap means devices like these could be powering your paper-replacing devices sooner than you think. Get the details straight from Stanford’s Yi Cui below.