Print your candy and eat it too 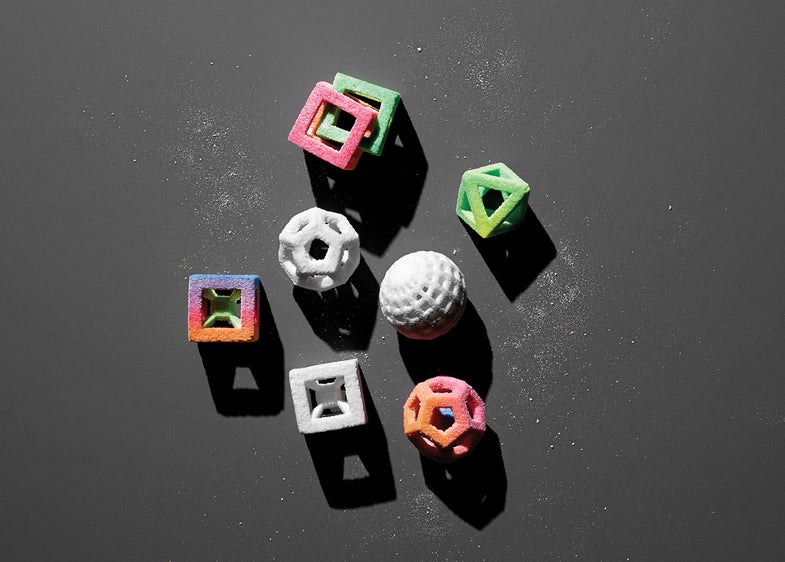 These days you can 3-D print just about anything—a wrist splint, a figurine that looks just like you, even components for rockets. Now food is on the list. One start-up, Natural Machines, began printing savory meals like ravioli and pizza in the fall of 2013. Over in Germany, the 13-year-old company Biozoon has started printing easy-to-swallow pureed foods for senior citizens, molded to look like the real thing. And 3D Systems will launch two commercial food printers, the ChefJet and the ChefJet Pro, this year.

That’s all well and good, but 3-D–printed food won’t have much of a future if it doesn’t taste good. So we asked 3D Systems to print out mint and sour-apple-flavored candy for the Popular Science staff to try. Like filament printers, the device deposits a powdered-sugar mixture and builds it up layer by layer using a water-based binding agent. The shapes were awesome (geodesic domes!), but what about the taste?

“Starts out sweet and ends up sour.”

“I would be very excited if this tasted more like a chip.”

“It’s like a sugar cube mixed with a cloud.”

“Gets stuck in your teeth.”

This article originally appeared in the January 2015 issue of Popular Science, under the name “Print Your Candy And Eat It Too.”