Unlike most opioid addiction treatments, Lucemyra is not derived from opioids themselves. 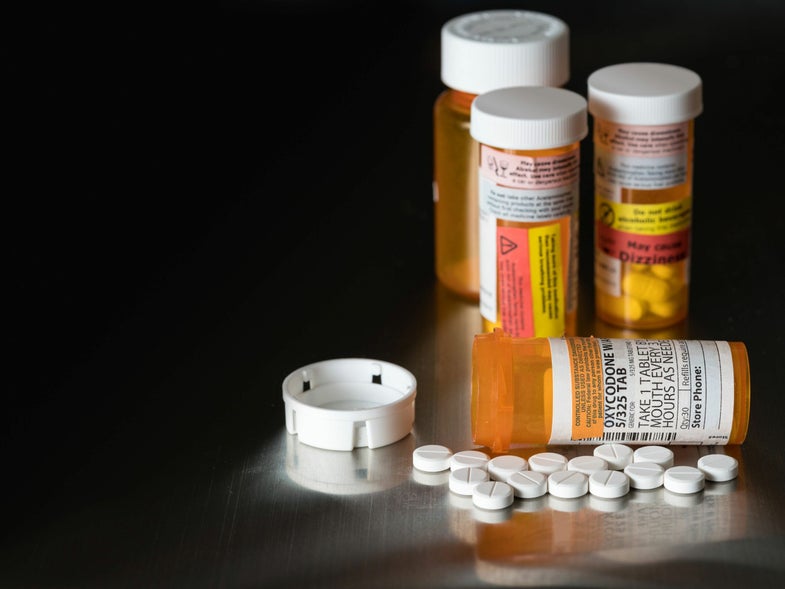 This week, the Food and Drug Administration (FDA) gave final approval for a drug shown to mitigate the symptoms associated with opioid withdrawal. It’s not the first treatment designed to help those with opioid addiction, but it has a distinguishing feature: It’s the first one that isn’t an opioid itself, and has no addictive component.

Medications exist now to assist those trying to break their addiction to pain medications, but all of those are opioids themselves, given in gradually lower doses to mitigate the symptoms associated with addiction and withdrawal. But the problem with this is that some patients remain addicted to and dependant on opioids in the long term, even if the drugs they’re receiving come under a doctor’s guidance and at a much lower dose. The idea behind the newly approved medication Lucemyra is to treat those same symptoms without including an addictive component.

The active ingredients in the pill bind to cell receptors in the body that lower the production of norepinephrine. This hormone works as part of your body’s fight-or-flight response, working in concert with adrenaline to increase your blood pressure, heart rate, and alertness when necessary.

While researchers don’t completely understand the mechanisms involved, they believe the fight-or-flight response, also known as the autonomic nervous system, plays a key role in the development of the classical symptoms of opioid withdrawal—which include nausea, anxiety and agitation, increased heart rate, severe aches and pains, and sleeping problems. The two clinical trials (which included a total of 866 adults) that enabled Lucemyra’s approval showed the drug worked to lessen the severity of those symptoms.

The impetus behind this medication approval, FDA officials say, is to provide more options for people with opioid use disorders. However, according to the FDA, the drug’s main purpose for now is to help those with more severe addictions. For those taking opioids as part of a pain management regimen, the method to wean off of the addictive meds remains the same: A physician-managed, slow taper of the medication, meant to lessen the withdrawal side effects and help the body adjust to being off the drugs.

But for people with what’s called opioid use disorder—which often starts with an opioid pain medication prescription —physicians often swap in another opioid medication, such as methadone, as well as partial and full opioid antagonists like buprenorphine and naltrexone, which bind to the same receptors that opioids do but instead of activating them, they block those receptors from being activated. According to the National Institute on Drug Abuse (NIDA), about 21 to 29 percent of people who are prescribed opioids for chronic pain end up using them in a way that wasn’t intended by their prescribing doctors. According to a 2016 review by the New England Journal of Medicine, 79.5 percent of people who recently started using heroin had used prescription opioids in a way unintended by physicians prior to their use of heroin. To treat the opioid use disorder, doctors prescribe these alternative drugs (methadone, buprenorphine, naltrexone) and then gradually taper their patients off them with the hope that the body will continue to adjust. These opioid alternatives tend to be less potent than either opioids typically prescribed for pain or ones commonly used recreationally, like heroin. For example, Buprenorphine is what’s known as an opioid partial agonist; its addictive side effects are similar to other opioids, but it’s far less dangerous overall. And at low tapering doses, it’s far less likely to initiate withdrawal symptoms than a gradual taper of a full opioid agonist.

This new drug offers doctors a way to help severely addicted patients without switching them to another opioid, but it remains to be seen how it will fit into the existing medical toolbox. However, its innovation is important: In 2017, the U.S. Department of Health declared the opioid addiction crisis in America to be a public health emergency. In 2016, 2.1 million people had an opioid use disorder, resulting in over 42,000 deaths. Looking for safe and effective ways to treat this condition that minimize the drugs’ addictive nature could significantly lessen both those numbers.

This story has been updated to reflect the fact that naltrexone is a narcotic antagonist, which blocks opioid pain receptors in the brain.