Mechanical grasshoppers, leaping to a forest near you 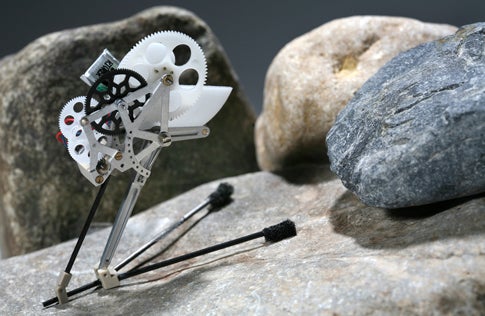 We’re not sure which is scarier, getting lost in the woods or being rescued by a swarm of mini robotic grasshoppers. But it’s search-and-rescue situations that a Swiss robotics lab had in mind when they built the world’s smallest hopping robot.

Small robots have a tough time traversing rocky terrain, so engineers Dario Floreano and Mirko Kovac of the Laboratory of Intelligent Systems in Lausanne looked to nature for a solution. Grasshoppers and locusts, they noticed, can quickly cover up to three feet of uneven ground in a single hop, much quicker than they could by walking (or, as is the case for most robots, rolling). So the researchers built a batch of microbots that can propel themselves eight feet into the air—10 times as high as other ‘bots their size—using two spring-loaded feet powered by the same type of motor that vibrates your cellphone. And although it’s just two inches tall and seven grams, the robot can carry half its weight in sensors and cameras.

Yet it still has trouble sticking its landings. That’s where the world’s lightest flying robot, a 1.5-gram glider that Floreano and Kovac built last year, comes in. In the next year, the duo may attach similar wings to the jumping robot so that it can coast to a safe landing, just as grasshoppers do. In addition to finding lost people, the researchers say, the ‘bots could be useful for environmental monitoring or launching robo-grasshopper invasions to survey other planets.