For animals and animal-inspired machines, launching into flight takes lots of energy. Some animals have evolved to achieve air not... 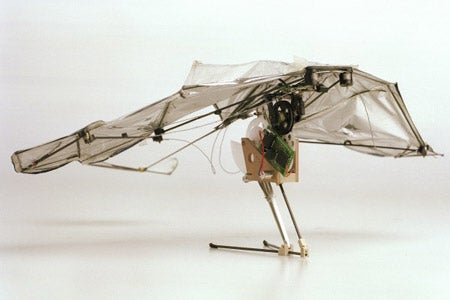 For animals and animal-inspired machines, launching into flight takes lots of energy. Some animals have evolved to achieve air not by accelerating and lifting off, but by jumping and then using their wings or flaps of skin to glide — like sugar gliders, for instance, or grasshoppers. Now a new Swiss robot can do this, too.

Behold the jumpglider, a hybrid jumping and gliding robot with two types of wing designs. It can base-jump off a building or another high surface, like this other Swiss glider, and then keep jumping once it has glided to a stop. It’s modeled after locusts and by the wing-walking abilities of bats.

In the first video, a locust-inspired glider hops down a staircase, gliding to a gentle crash landing every few steps before jumping off again.

But it would be better to have folding wings that can be safely stowed in pre-gliding mode, like locusts and other summertime grasshoppers do. So Mirko Kovac and colleagues at the Swiss Federal Institute of Technology in Lausanne built another one:

It can jump a height of up to 76 centimeters at a take-off angle of 75 degrees.

Finally, engineering students modeled another version after bats, which tuck away their wings to roost and unfurl them quickly when taking off. Watch as one of the researchers throws the bat-bot into the air, allowing it to spread its pretty mylar wings. A wheel not unlike a fishing reel is attached to the robot’s underbelly, controlling the lines running throughout the wings.

The jumpglider project was presented at the IEEE International Conference on Robotics and Biomimetics (ROBIO) last month in Phuket, Thailand, where it won an engineering award.