The 8 most exciting sports and outdoor products of 2020 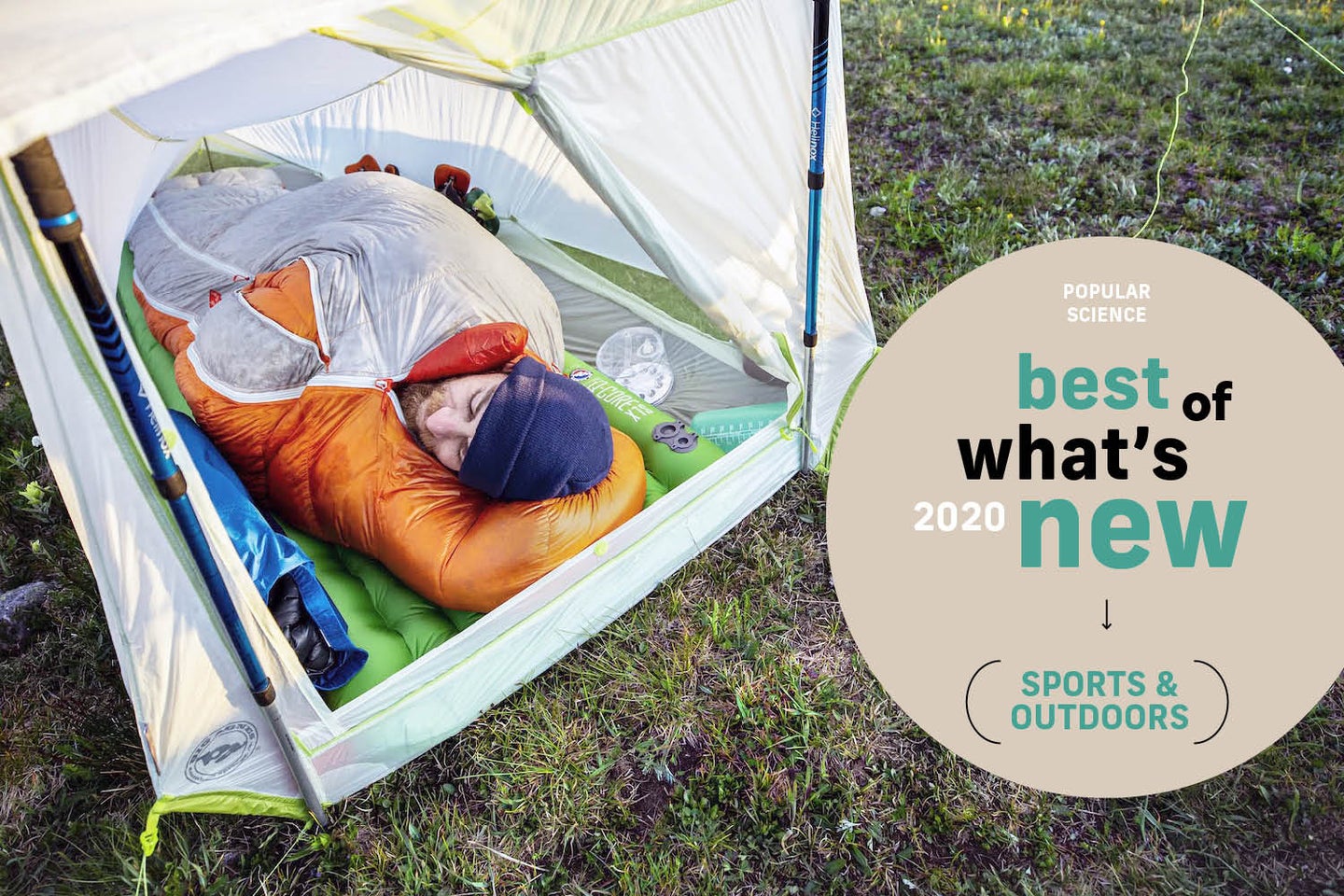 The year's most important developments in the world of sports and outdoors. Big Agnes
SHARE

Customization, comfort, inclusivity, and environmental awareness are the buzzwords we kept coming back to for this year’s top sports and outdoor innovations. Outdoor activities and adventures should be accessible to everyone, and that means the necessary equipment should work for everyone, too—while keeping the impact on the planet at a minimum. After all, how can one truly enjoy nature while causing it harm? We’re celebrating backpacks and sleeping bags designed for a range of body types and synthetic insulation and water bottles that represent a friendlier relationship with the Earth. So get outside and have fun. It’s one of the best things you can do in 2020.

Stay warm without warming the planet

Puffy jackets filled with synthetic insulation can keep you warm, but the origins of most artificial fillers fail to make environmentalists feel warm and fuzzy. That’s because to produce it, multiple types of polyester have to make trips through hot ovens so the fibers bond together—and each bake relies on fossil fuels like coal or gas. PrimaLoft has devised a new way to create the fluff that goes in jackets without requiring the heat from those dirty ovens. The polyester bonds together as it travels through the factory on a conveyor-belt-like system and is exposed to moving ambient air instead of being cooked. The process of making the PURE insulation is slower, but that time pays off in savings to the environment: PrimaLoft says that the new technique produces 48 percent less carbon dioxide than their previous method. Patagonia’s Nano Puff is the only jacket using the eco-friendly insulation for now, but more partners may be announced in 2021.

Nalgenes are a staple of outdoor adventures, and the company’s new Sustain line of vessels look, feel, and perform just as you would expect from one of their traditional one-liter bottles. But there’s a positive environmental twist: They’re made from 50-percent recycled plastic. The new blend is called Tritan Renew, and it features material from items like discarded single-use water bottles. Recycled plastic isn’t known for looking fresh and pretty, but bottles with this new composition break the mold. The company that makes Tritan Renew, Eastman, uses a proprietary process that breaks the old stuff down to its molecules before reforming it to achieve the strength, transparency, and shine you expect from a Nalgene. The blend is set to show up in several other companies’ hydration products in the near future.

Hiking gear to fit all frames

Hiking up a mountain is hard enough, but if your gear doesn’t fit your physique, the journey is even harder. Gregory’s new line of packs is tailored specifically for plus-sized adventurers. To create them, the company consulted with a group called Unlikely Hikers to understand what standard backpacks lack and to ensure the new ones would do a better job. Among the design tweaks: longer hip belts, with their pockets moved toward the front for easier access. The first packs, called Katmai and Kalmia, will hit REI on April 1, 2021, and the whole collection debuts May 1. Unlike many extended-size products, these packs will cost the same as Gregory’s standard offerings.

Jackets that soak up the sun

Your typical puffy winter jacket does its best to keep you warm by insulating your body from the colder air outside. Columbia’s new Black Dot tech takes the process a step further. The exterior of each garment is covered with thousands of small aluminum circles, all of which are coated in a dark hue. That construction does two things: it physically blocks more of your thermal energy from escaping out into the environment than fabric can alone, and it also absorbs heat from sunlight. The result, the company says, is a garment that helps people stay warm for as long as possible.

Anyone who has ever donned a regular headlamp has likely noticed shortcomings in how they fit: a stretchy headband squeezes your noggin, which can make you feel sore after a while. But Petzl’s strange-looking IKO works differently. Instead of that traditional band, the lighting system relies on a flexible thermoplastic polyurethane loop that rests lightly atop your head like Wonder Woman’s tiara. The somewhat-rigid material also means your lamp will stay pointed ahead even if you wear the device around your neck, which is definitely a bright idea.

After a long day of hiking, climbing into a fully-enclosed mummy bag is a great way to get warm—but while the narrow sacks do a better job of trapping body heat than wider sleeping bags, they’re often uncomfortably confining. Torchlight bags from Big Agnes offer an expandable twist on the mummy design to provide the best of both worlds. In addition to the zipper that opens the bag, the product includes two additional zippers on each side that create up to 10 inches of extra space. Unzip them from the top or bottom to stretch out a leg or an arm—you’ll still be wrapped in warm insulation, but with added room to sprawl. The customizable space also means that larger folks can tweak their bag’s fit for a comfortable night’s rest.

WingLock and TwinLock valves by Therm-a-Rest

To get air into an inflatable sleeping pad, chances are you will need to huff and puff into a valve. Therm-a-Rest’s new offerings make that process much more efficient. On the brand’s lighter-weight mattresses, the new WingLock valve allows air to flow in three times faster than previous models, while a mechanism within keeps your precious breath from rushing back out. Deflating is quicker, too: Twisting two outer handles lets air rush out twice as fast as it used to. Bigger pads from the company rely on two new valves, called TwinLocks—one is for quickly blowing air in, the other for rapidly letting it out.

A golf driver’s titanium face is typically thickest in the middle. Callaway’s latest club flips that arrangement, putting the thinnest layer of titanium at the sweet spot. That decision came from an unlikely source: artificial intelligence, which was integral in designing the entire line of Mavrik clubs. Callaway’s in-house supercomputer suggested that a skinny center supported by a system of reinforcement ridges would lead to faster ball speeds off the clubhead. To the surprise of the company’s veteran engineers, the AI was right. The company had to develop its own proprietary titanium alloy that could endure both the rigors of the manufacturing constraints and the repeated impacts from massive tee shots.

High-tech stargazing for the masses

A motorized telescope stand with precision location tech can give you a wonderful tour of the night sky. Unfortunately, they also typically come with steep learning curves and high price tags. Celestron devised a simple mirrored mount that, with the help of a companion app, enables your smartphone to help you find and observe celestial bodies without hours of aimless hunting. On-screen arrows show you exactly how to move the optics in order to home in on the desired outer-space object. The calibration process takes just a few minutes and—because there are no added electronics—the compatible scopes range from $400 all the way down below $200.