How scientists imagined and built an undersea utopia for humans

As astronauts took the first first steps on the moon, aquatic explorers were experimenting with ocean cities. 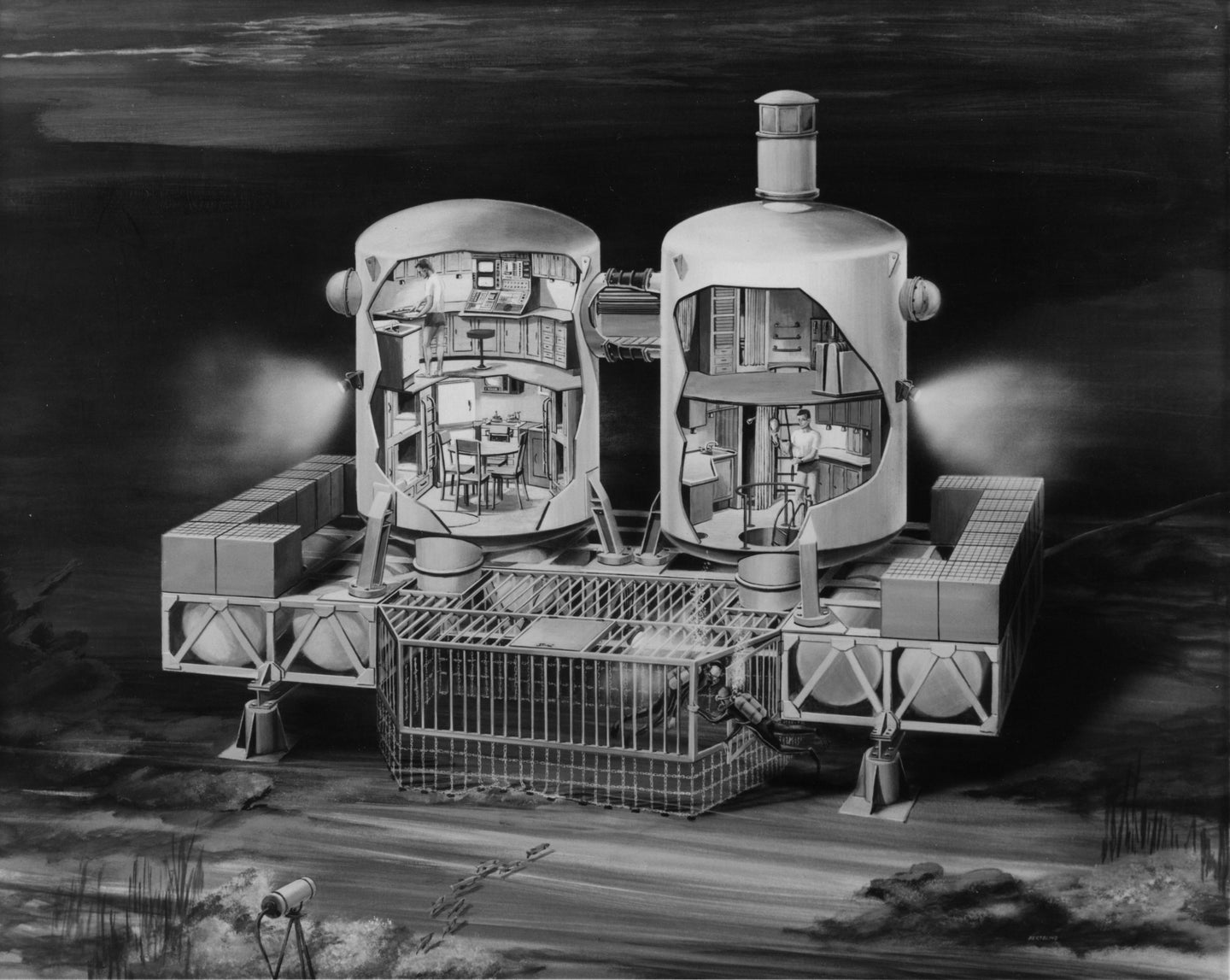 In an article in New Scientist in March 1960, the British marine biologist Sir Alister Hardy suggested that an ancestor of modern hominids had been forced by terrestrial evolutionary competition to adapt once again to life in the sea. As evidence, he cited various con temporary aquatic mammals thought to have terrestrial ancestors such as whales, seals, and manatees. Some hominids, he claimed, might have been subject to the same evolutionary pressure. And if such an event had happened in the past, it could, and would, happen again. “No one can doubt that history will repeat itself and Man will be forced once again into the sea for a living.” Hardy’s article was accompanied by drawings of scuba divers corralling fish with a “ future submarine tractor trawl.” He claimed humanity’s future hinged on the successful exploitation of marine resources, primarily marine foods. And he was far from alone in these speculations. In the aftermath of World War II, as the Allied powers struggled to care for thousands of displaced persons in Europe, marine algae attracted attention as a potential miracle food that might solve the problem of global hunger. The Carnegie Institution, presided over by the former head of the United States’ war time science research program, Vannevar Bush, championed the idea. Some people, even more ambitiously, speculated that humans would find ways of diverting ocean currents to increase food production in arid and frozen regions of the globe.

Although evolutionary anthropologists lambasted Hardy’s theory of an ancient aquatic ape, scuba divers and marine engineers were prepared to embrace his ideas. Jacques Cousteau deserves much credit for popularizing the idea that the underwater world was destined to become ever more accessible, a message spread through his popular writing and documentary films. Cousteau, in the words of an American journalist, made “his alien environment as familiar to Americans as the Laugh-In [a comedy television show] cocktail party.” In Europe Cousteau gained increased public authority with his appointment as director of the Oceanographic Museum of Monaco in 1957, a position he held for over thirty years. Speaking before the World Congress on Underwater Activities in London in 1963, Cousteau predicted that there would soon be a “conscious and deliberate evolution of Homo aquaticus, spurred by human intelligence rather than the slow blind natural adaptation of species.” “After living in compressed air habitats for generations, Water People” would eventually even be “born at the bottom of the sea.” Future “alteration of human anatomy” would “give man almost unlimited freedom underwater.” American scientists at NASA, he claimed, were already working on an “artificial gill” that could be connected to a diver’s bloodstream allowing the filtration of oxygen and carbon dioxide and bypassing respiration—an assertion journalists were unable to confirm with NASA.

According to Cousteau biographer Brad Matsen, when several journalists dismissed his predictions as science fiction, Cousteau countered that they were, on the contrary, quite conservative. His prophesies fell within a larger utopian project of expanding human powers and freedoms, eventuating in the creation of a “new man” through the opening of oceanic space. As he later wrote, “I am not a scientist, I am an explorer… My goal has always been to free Man from the slavery of the surface, to invent ways and means of permitting him to escape from natural limitations, to breathe in an unbreathable element and resist higher and higher pressures. And not only to resist, but perhaps to adapt himself, to move about, react and live within the sea and take possession of it.” This larger utopian project of expanding human powers and freedoms, Cousteau announced, would inaugurate a new era for humanity.

During the late 1960s many believed revolutionary social and political change was imminent, and Cousteau was no exception. Soon there would be “undersea parliaments and new nations,” he wrote; “poets, architects, and painters would be needed to give expression” to this “new world.” From his own work with experimental underwater habitats, Cousteau concluded that these changes would rapidly follow on from the experience of underwater living. He presented his oil-industry-backed Conshelf program in the Mediterranean in a 1964 Oscar- winning documentary, “The World Without Sun.” After visiting divers Robert Falco and Claude Wesly during the seven-day Conshelf I underwater habitat experiment, Cousteau reported, “They were at home there. They had taken on a new mentality. It was no more my business. They were staying underwater but I was returning to the top. This…makes me believe firmly in the new men of the future… The birth of a new man is in the line of nature.” Many years later, speaking at the First Congress of the Association of Space Explorers in 1985, Cousteau recalled that Falco and Wesly, like astronauts, had passed through a “moral gateway that made them see national and tribal disputes as ridiculous, as something mankind must learn to leave behind.”

Technological developments in the years immediately following Cousteau’s pronouncements seemed promising for such aspirations. Walter L. Robb, an engineer at the General Electric Research and Development Center in Schenectady, New York, appeared on the cover of Science News Letter in November 1964 along with an “aquatic-hamster.” Robb had developed an artificial membrane that altered oxygen from the surrounding water and permitted the hamster to breathe in an enclosed cage submerged in an aquarium tank. In 1967 a journalist, writing in Popular Mechanics, who admitted initial skepticism of Cousteau’s predictions, reported that designs for artificial gills had now been patented. Scientists, he claimed, were now “seriously” discussing the possibility of implanted artificial gills, and two divers “from an undersea- engineering form” had volunteered to undergo surgery. Meanwhile, a research group at Duke University led by Johannes A. Kylstra experimented on mice and dogs to demonstrate the feasibility of breathing oxygenated fluorocarbon liquid. Eventually, Kylstra performed one human liquid-breathing experiment with commercial diver Frank J. Falejczyk, who had already performed simulated saturation diving experiments in hyperbaric chambers at the Duke University Medical Center and the Hyperbaric Chamber Unit at the University at Buffalo. Although the experiment proved dangerous and was not repeated, it foreshadowed later liquid ventilation for premature infants.

Man-in-the-sea saturation diving experiments of the 1960s and 1970s cannot be considered in isolation from contemporaneous experimental work in diving physiology. In a 1963 letter from the American entrepreneur-turned-diving-pioneer Edwin Link to Edward H. Lanphier, a medical researcher at the University at Buffalo, Link explained that a lack of funds prevented him from hiring Falejczyk for purposes of human experimentation, but he offered the hope that “in the near future all of us will be on our way towards better times in this research.” He suggested that “in another year” they would be “crying to find men like him.” Link also experimented with animal subjects. In the same letter he describes simulated dives with mice to the equivalent of 2000 feet and remarks that he had been “tremendously interested” to learn of Lanphier’s “oxygenation work using a dog.” Finally, he informed Lanphier that his team would soon build a larger pressure chamber “to contain animals as large as goats” at a simulated pressure of 3000 feet, and he requested Lanphier’s advice on the most suitable animals for such experiments (“dogs, goats, monkeys, etc.”).

By 1964 Cousteau had moved forward with several ocean installations. His subsea Conshelf habitat program was now in its second stage, and emboldened by the commercial success of his documentary films, he began preparing an ambitious third habitat, Conshelf III. That same year he launched a floating laboratory platform in the Mediterranean named the Mysterious Island after the Jules Verne novel of the same title. The floating laboratory provided a platform for in situ marine research, and the press was quick to label the installation a “floating island.” Rotating teams of four scientists manned the station, which was positioned approximately halfway between Monaco and Corsica. The carefully chosen site, described by one researcher as “the eye of a liquid cyclone,” the calm center of a turbulent gyre, was approximately a hundred miles offshore over water one and a half miles deep. Unlike the free-floating FLIP platform built by Scripps Institution of Oceanography for hydroacoustic research that had been launched two years earlier, the Mysterious Island was tethered to the seafloor but capable of moving freely within a confined radius. Women and televisions were forbidden on the platform, but with the collusion of some Russian oceanographers visiting from the research vessel Mikhail Lomonosov, a television set was smuggled aboard in July 1969. And there, floating in the Mediterranean, a small group of French and Soviet scientists watched grainy black-and-white images of American astronauts fist setting foot on the moon. They may have felt some fraternity with the lunar explorers, for both Cousteau’s Mysterious Island and Scripps’s FLIP—first steps in the colonization of the oceans—promised the dawn of a new age.