Just you and the great outdoors. 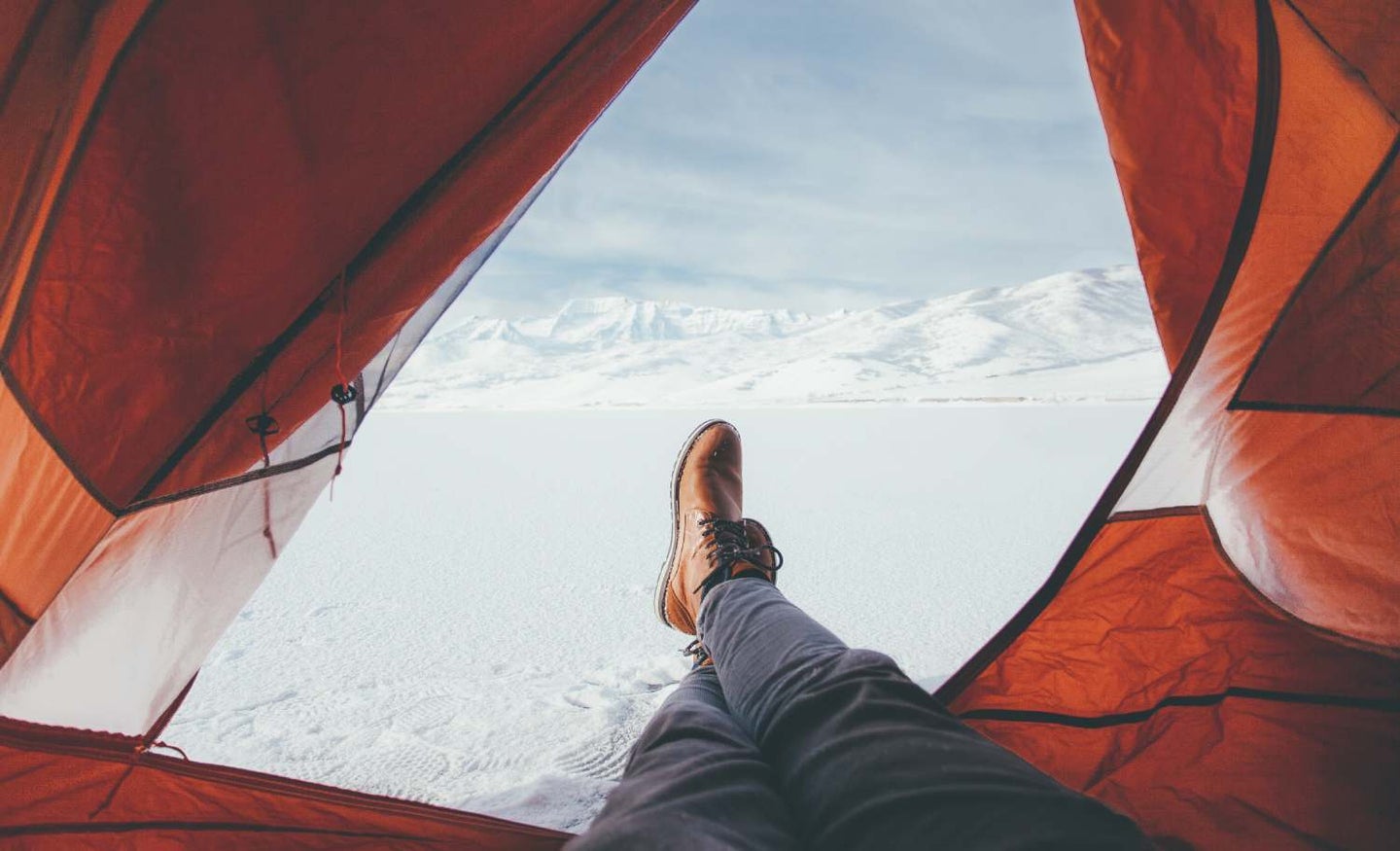 Nothing says peace and quiet more than a vast, frozen expanse. Colby Thomas via Unsplash
SHARE

The trails are devoid of human life, animals wander freely through the woods, and snow falls soundlessly on the treetops—it’s wintertime in the great outdoors. But despite the sparkling vistas, uncrowded trails, and the beauty nature offers to hikers in this time of the year, many never experience the wonder that the fourth season offers because of one tiny detail: the cold.

What most people don’t know is that a little know-how, the right equipment, and simply wearing multiple layers can help with the challenges of camping in the winter. With some planning, you’ll easily stave off frostbite, sleepless nights, and never-ending shivers, all while enjoying beautiful natural sights.

“Winter is one of the best times to be outdoors,” says Tayson Whittaker, winter camping enthusiast, and founder of outdoor gear and clothing company Outdoor Vitals. He cites seclusion, wildlife activity, and the peace and quiet of a landscape covered in snow as some of the reasons you’re just as likely to find him setting up camp in the snow as next to a field of spring flowers.

To him, it’s easy to explain why more people aren’t outside, experiencing the magic of seeing a herd of elk feeding amid freshly fallen snow: “It’s plain and simple fear—fear of being cold, of doing something they haven’t, of the unknown, of the hypotheticals,” Whittaker says.

But to be fair, there are plenty of hypotheticals regarding cold that would deter someone from camping in the middle of winter: frostbitten extremities, feet that won’t thaw, a chill that never abates, nights spent awake and shivering in a frosty tent, wet gear, and worst of all, hypothermia. Whittaker has personally suffered through most of these situations, but he says preparation can make it easy for anybody to avoid them.

While warm temperatures rarely require hefty sleeping bags or insulated sleeping pads, winter temps demand you be familiar with your gear and what it can handle. But fear not—this doesn’t necessarily mean you have to spend a lot of money on new equipment. “You don’t have to reinvent the wheel,” Whittaker says. “A lot of times, you can take the gear you have and stretch it to work in that forth season.”

Start with a warm enough sleeping bag for the temperatures you anticipate. (Keep in mind men’s and women’s bags are rated differently, since women tend to sleep colder.) If you don’t think your current bag will do, you still might not have to shell out several hundred dollars for a new one—you can often spend less than $50 on a sleeping bag liner or a backpacking quilt and layer the bags.

But that’s just half the battle. A sleeping pad designed for winter is what separates you from the frozen ground, so it’s also of the utmost importance. Choose an insulated variety with an R-value (an insulation rating used from everything to sleeping pads to the fiberglass you stuff in your walls) of at least four, or simply stack an inflatable pad on top of a closed-cell foam pad for extra insulation from below.

Next, mind your tent: “Make sure you have a shelter that can handle a bit of a snow load,” Whittaker says, warning that if it can’t, the entire structure could cave. Four-season tents are designed to handle harsh winter conditions and the extra weight of snow, but they are expensive and less commonly stocked at your local outdoor retailer. A three-season shelter will do the job, too, as long as it’s freestanding. But Whittaker recommends avoiding single-wall tents or semi-freestanding tents that don’t have sturdy frames, since they are more likely to bow and collapse under a few inches of build-up.

As for boots, opt for an insulated pair. If they have removable linings, keep them in your sleeping bag at night so you don’t have to put your feet in cold snow boots in the morning. You can also keep your boots in a zip-top bag inside your sleeping bag to prevent them from freezing in extra cold temperatures.

Wet gear is often the first sign that trouble is on the horizon. That’s because if your jacket, sleeping bag, or boots get wet in the winter, they won’t dry out as quickly as they would in warmer weather. In fact, if temperatures are below 32 degrees Fahrenheit, they’ll freeze before they dry.

That’s why keeping everything as dry as possible is crucial. And that goes for clothing and gear alike. These are the maxims you need to abide by:

“Have a layering strategy,” Whittaker says about clothing. Don’t just throw on a long-sleeve shirt and a jacket—you’ll have no wiggle room if you get too cold or too warm. Instead, start with a warm synthetic base layer, add a mid-layer such as a fleece, wool shirt, or mid-weight jacket, then top it all off with a waterproof layer. Make sure you remove layers when you start to sweat and add them back on when you begin to cool down.

But whatever you do, avoid cotton. Once the material gets wet, it doesn’t dry easily, which means that unless you want to suffer from hypothermia, you won’t be able to wear it again.

Whittaker also suggests ditching some of your down when you’re winter camping—if it gets wet, it loses its insulating power. Instead, opt for synthetic insulation in jackets and other clothing layers. Whittaker does make a case for down socks which, according to him, are the only down garment he wears in the winter. He recommends them for use inside your tent and to keep your feet warm overnight.

As for your hands, treat them like you do the rest of your body, and dress them with layers. Start with a snug synthetic base layer such fleece or nylon, which will wick moisture, provide warmth, and allow dexterity when it’s time to light your stove or set up your tent. Then layer with a waterproof glove or mitten, adding one additional layer in between for extra warmth if you feel you need it.

For your feet, start with a synthetic layer, then a thick pair of wool or synthetic socks. Make sure your boots are big enough to accommodate these layers (one size larger than what you would normally wear should do) or circulation may be restricted, which will not only be uncomfortable, but will keep you feeling cold.

One of the upsides to camping in the snow is that you won’t have to bring as much water as you would in warmer weather. You can use clean, fallen snow and melt it in a pot over the fire until it comes to a boil—this will kill viruses and bacteria and make it safe for drinking or cooking.

Speaking of snow, stomp down on and compress the snow where you plan to place your tent so you start with a flat surface and don’t sink throughout the night. Don’t forget the area around your vestibule, either—it’ll give you a place to stash your bag and climb out of your tent without tumbling into deep snow.

If you’re worried about fingers and toes getting too cold, bring along single-use hand– and foot-warmers, or fill a water bottle with hot water before bed. Place it in your sleeping bag to help warm you up at night, but make sure the lid is on tight so you avoid getting burned or soaking your gear.

But you’re not the only one who has to keep warm: make sure your batteries, GPS, cell phone, and other devices don’t freeze, since they won’t hold a charge if they’re cold. During the day, keep them near your body in an interior jacket pocket, and store them in your sleeping bag at night. Most bags even have a special zipper pocket near your chest for this purpose.

Don’t let winter weather keep you indoors. Instead, protect your stuff from the damp, choose gear wisely, layer up, and don’t let the thermometer readings frighten you out of enjoying the season.