Survive the great outdoors by making your own drinkable water

The thirst is real. But so is dysentery. 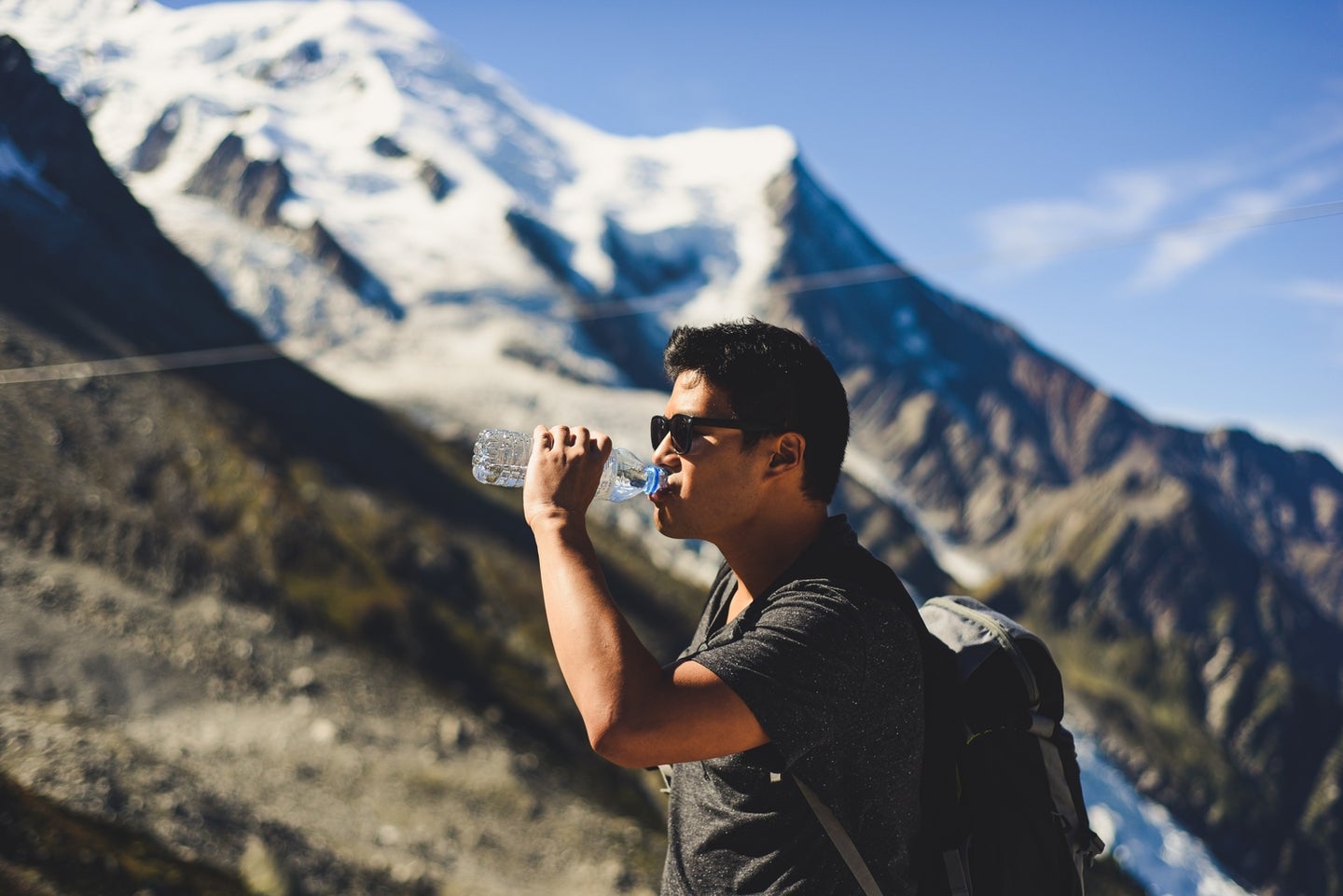 In the wilderness, fighting dehydration by collecting water from streams or springs is often necessary. But a single sip from that crystal clear, ice-cold flow could mean uncomfortable gastrointestinal distress that will have you running to dig a cat hole every 30 minutes.

Because no matter how clean a freshwater source seems to be, there’s a good chance it carries pathogens and bacteria that can make you sick. Giardia, rotavirus, and dysentery—all found in waterways contaminated by human or animal waste—are just a few examples of what may be lurking, invisible, in one innocent swig. True—drinking straight from a natural source might not always make you sick, but it only takes one experience with serious diarrhea while camping to convince you it’s not worth taking the chance.

The first step toward purification—or disinfection, the term some outdoor professionals prefer—is clarification, or simple filtering. This will remove suspended particulate matter like dirt and sediment, as well as many microorganisms. “When you start [disinfecting] water, you want to start with visually clear water,” says Paul Nicolazzo, president and director of the Wilderness Medicine Training Center. If water is cloudy or there are visible particles floating around, clarification is especially important.

Fortunately, clarifying cloudy or sediment-filled water is easy. You can either let untreated water stand in a container for a minimum of one hour and let the debris settle, or strain it through a coffee filter or clean bandana. Straining will collect fine pieces of debris so you can continue with purification and is especially important if water is still cloudy after letting it settle.

You can also use a coagulation method, which encourages both visible and microscopic particles to clump together. Just pour cloudy water into a bucket or wide-mouth container, and add 1/8 to 1/4 teaspoon of aluminum sulfate powder (often available as Alum or pickling powder at your local hardware store) per 1 gallon of water. Stir the water for 5 minutes, allow it to settle, then scoop out the clean water at the top of the vessel. This is faster than straining water through a coffee filter, and useful if you’re trying to produce drinking water for a large group of people.

While clarification removes visible contaminants, purification, if done correctly, frees water from all infectious microorganisms. Many backpackers debate whether all water needs to be purified, but it’s easy to do and will further reduce the chance you’ll contract one of those ghastly gastro-intestinal illnesses.

The most effective method of purification is boiling your water—doing so for at least 1 minute kills everything from viruses to bacteria. Most backpackers and explorers carry a stove, so if you’ve got one of those, you don’t need anything else. And if you’re already planning to boil water for hot beverages and meals, it’s a no-brainer. Keep in mind that if you boil all of your drinking water, you’ll need additional stove fuel, especially if you’re camping at higher altitudes where water takes longer to boil.

Chemicals like iodine, chlorine, and chlorine dioxide are other options. They are cheap, effective, and available at most outdoor stores and drugstores. They come in liquid, powder, or tablet form and can be added directly to water, though they do tend to take more time to disinfect than boiling—about 30 minutes depending on the type, and even longer in cold water.

The chlorine-based options have almost no flavor, and even though iodine gives water an unappealing taste, that can be fixed by adding a bit of ascorbic acid (vitamin C powder). Also, keep in mind these chemicals won’t eliminate cryptosporidium cysts, which cause nasty gastrointestinal distress and are more likely to be found closer to civilization. All other methods of purification do a better job at removing this specific parasite.

Another popular purification method is filtering. Filters come in two varieties: ceramic and charcoal. The latter is more popular with backpackers since it’s lighter and cheaper, but ceramic ones are reusable. A filter size of 0.2 microns effectively removes parasites, protozoa such as cryptosporidium cysts, and bacteria. However, filtering won’t clear out viruses. Even filters than contain iodine resins aren’t entirely reliable because of how briefly water is in contact with them.

If you can’t boil your water and you opt for a filter, the Centers for Disease Control and Prevention recommends also using chemical disinfectants to kill the largest amount of pathogens.

Another option is to use ultraviolet light pens. Starting at around $80, they are more expensive than chemicals and most filters and require batteries, making them unappealing to some. As their name says, UV pens use short-wavelength UV (UV-C) light to kill pathogens and most of them purify one pint of water in 45 seconds, and one liter in about 90 seconds. They aren’t the fastest choice if you’re trying to disinfect water for large groups, but are quick and effective for individuals. To use this method effectively, it’s extra important for the water to be clarified and free from debris.

In an emergency, choose the right source

If you’re stuck in the wilderness with no UV pen, stove, or chloride tablets, there are still ways to decrease your risk of swallowing a nasty bug. First, forget the myth that running water is safer to drink. That’s just not true. “Even water that looks clear and clean isn’t always that way,” says Nicolazzo, who has suffered from both dysentery and giardiasis and has spent 45 years in the wilderness education industry. Often, you’re better off collecting water from a foot below the surface of a large, clear, not stagnant lake—though that’s still not free from risk. Be especially cautious of streams or rivers during the spring, when melting snow carries animal and human waste that was deposited over the winter, downhill.

If a stream is your only option, make sure not to collect water downstream from popular campsites or animal pastures. Also, the closer you are to the source, the cleaner the water probably is. If you find an underground spring, you’ve hit the jackpot. Likewise, water at higher elevations is also generally safer, as it hasn’t traveled downstream and picked up contaminants along the way. However, ice isn’t a safe bet since bacteria can survive for months on frozen surfaces.

Alternatively, water found immediately after a rain in potholes in the rim rock of many southwestern canyons is typically safe to drink.

Purification methods in the backcountry are far from one-size fits all. Nicolazzo uses several when he heads outdoors—he boils water for tea and meals, uses a UV pen for drinking water, and carries povidone-iodine, used to disinfect both wounds and water. I often filter water, then use chlorine dioxide tablets, as per CDC recommendations.

If you’re planning to disinfect water with chemicals and want to be as efficient as possible, Drew Leemon, risk management director at the National Outdoor Leadership School, suggests bringing two bottles. In short: one contains treated water that’s ready to drink, and the other is full of water that’s in the process of being treated. That way, you won’t have to sit and wait for the purification process when you run out of disinfected water, which also reduces your risk of dehydration.

Outdoors, contracting a gastrointestinal illnesses can ruin your expedition in the best scenario, or be life threatening in the worst. Plan ahead and treat any water you drink to skip the diarrhea and enjoy the time you spend outdoors.