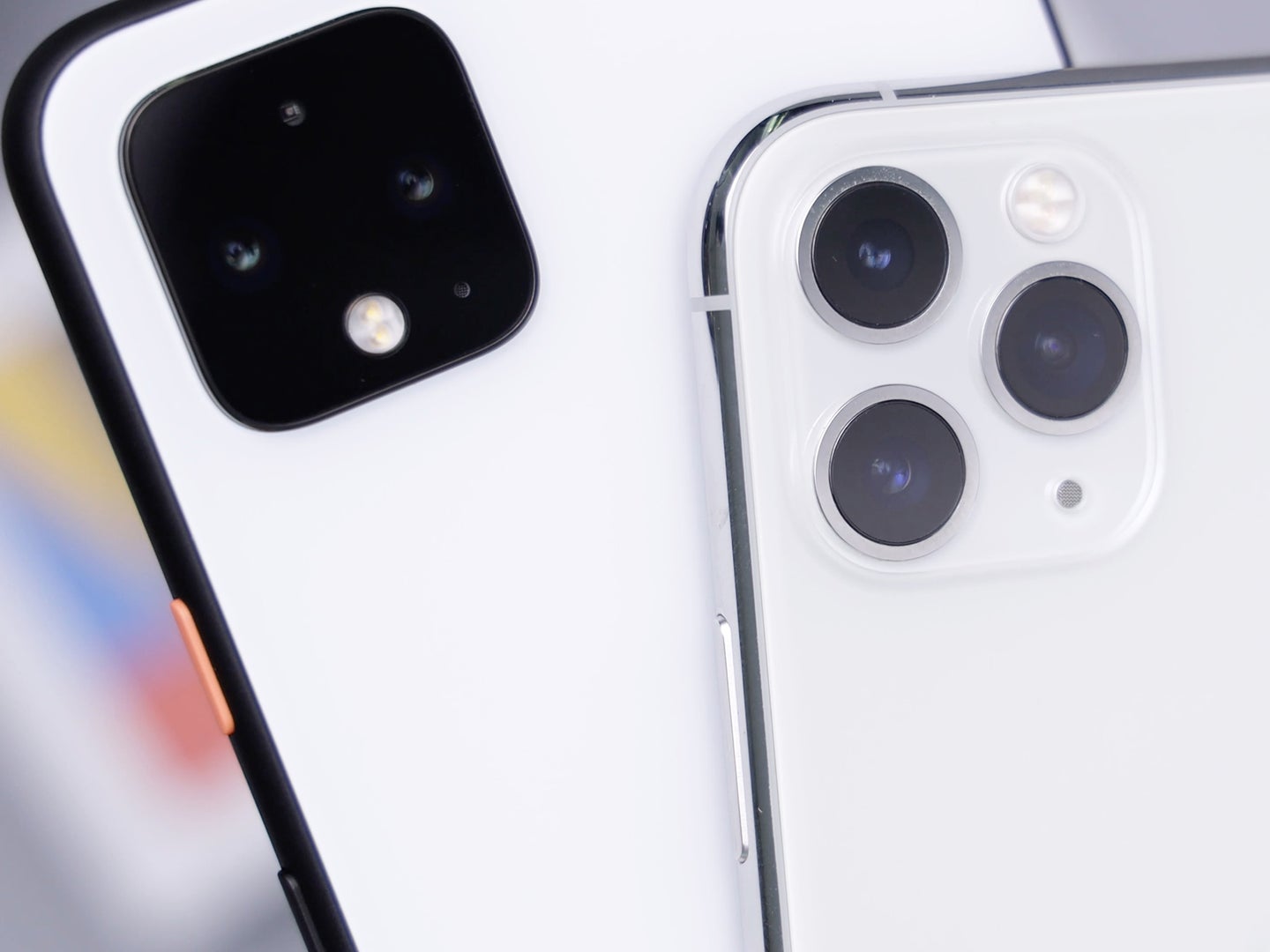 If it weren't for that black square, telling an Android and an iPhone apart would be harder than finding Waldo. Daniel Romero / Unsplash
SHARE

Steve Jobs famously said that he wasn’t averse to stealing a great idea or two, and with the launch of iOS 14 on the horizon, people have started talking about Apple getting some ideas from Google’s Android.

But the swiping goes both ways—Android and iOS have taken plenty of ideas from each other over the years, which has resulted in two operating systems that are much more similar in features and functionality than they used to be.

Dig back a little and you’ll find plenty of examples—though we should say up-front this history is slightly edited. For example, one or two of these features appeared on the iPad before the iPhone, or in versions of Android from Samsung and LG before they appeared in the stock version.

For years, widgets were one of Android’s main advantages over iOS. This feature has enabled users to break the regimented rows and columns of app icons with media players, calendars, weather forecasts, mini maps and more, and has been present in Google’s operating system from its early stages. It took a while, but Apple has clearly taken note: After adding widgets to its Today view on iOS, they’re now coming to the iPhone home screen with iOS 14.

In 2017, the iPhone X got rid of the Home button and introduced a whole new way of getting around a smartphone—swipe up to go home, swipe up and hold to see recent apps, and so on. The team at Google must have liked the new navigation style, because Android adopted a similar set of gestures for both Android 9 and Android 10.

Historically, every app you’d install on an iOS device lived on your home screen, and the only way to keep it hidden was to bury it in a folder. Android users have been able to maintain decluttered home screens by hiding apps away in the app drawer (one tap away from the home screen), which Apple has now decided is a good idea. The hub will debut in the upcoming iOS 14, and it’ll be called App Library.

Some people find them more distracting than useful, but others couldn’t live without them. The small, simple notification badges on app icons debuted in iOS, showing users how many unread emails, messages, or other alerts awaited them. Android belatedly decided to add the same feature to its own interface with the launch of Android 8 in 2017.

Android users had been enjoying the ability to swipe-and-type for years before iOS 13 added it as a native option in 2019. If you’re not familiar with this feature, get acquainted, because it’s a supercharged productivity aid—just swipe over the keyboard letters you want to input, without lifting your finger from the screen.

For a long time, Apple has been giving users a great deal of control over how apps handle your data, so they can only access information such as your location while they’re running. It’s such a good way to manage permissions that Google decided to add a close copy to its own OS with Android 10 in 2019.

Android is moving away from on-screen buttons these days, but for many years it had something iOS didn’t—a system-level “go back” button that took you to the previous screen, regardless of whether that was a different app or a different page. Eventually, Apple decided to add a back button of its own, up in the top left-hand corner, with the launch of iOS 9 in 2015.

Before everyone got so obsessed over dark mode (and we’re still not sure why they are), there was night mode, which reduced blue light and turned the screen amber before bed. Apple introduced the feature with Night Shift in iOS 9.3 in March 2016, before Android followed suit with Night Mode in Android 8.0 Oreo almost a year and a half later.

Another feature coming to the iPhone with iOS 14 is picture-in-picture, which is exactly what it sounds like. If you’re watching a video, you can keep it on screen in minimized form while you check out other apps on your handset. As the engineers at Apple are no doubt fully aware, picture-in-picture functionality has been available on Android since 2017.

The Do Not Disturb mode is a staple of modern-day phones, giving you a brief respite from the flood of notifications that normally have your handset vibrating non-stop. This was a feature Apple added first to iOS 6 in 2012. Google took its time and added it to its OS in 2014 with the launch of Android 5.0 Lollipop. (That was back when Android versions still had cute snack names.)

11. Over the air updates

Cast your mind back to 2011, when Apple released iOS 5, the first version of its OS that could be updated over Wi-Fi without requiring you to plug your phone into a computer and sync it with iTunes. This was a great feat back then, since Wi-Fi wasn’t quite as fast as it is now. But it wasn’t such a big whoop after all—Android users had already been updating their devices over the air for several years.

Apple originally beat Google to the digital assistant punch—they bought Siri and integrated it into the iPhone 4S in 2011. Nine months later, Google launched Android 4.1 Jelly Bean, which included the Google Now feature that eventually morphed into the Google Assistant we have today.

You think notifications are bad today? Let me remind you that back when the iPhone ran iOS 4, notifications interrupted whatever you were doing with a pop-up on your screen. Luckily, Apple realized how annoying this was, so iOS 5 introduced the notification drawer that allowed users to access all their updates by swiping down from the top of the screen. This wasn’t an original design though, since it was already a standard fixture on Android devices.

With the arrival of iOS 11 in 2017, screenshots got a little different—users were able to tap on a screengrab right after capturing it to bring up a special annotation menu for adding doodles or applying a crop. Google added something similar to Android, but not until Android 9.0 Pie, which didn’t arrive on phones until mid-2018.

Strange though it might seem now, the iPhone launched with Google Maps as its default mapping app, and it wasn’t until 2012 that Apple Maps appeared on the scene with iOS 6. Since then it’s continued to play catch-up with Google Maps, including the recent introduction of its Look Around (aka Street View) road-level photography feature.

This was a close one, but Apple just got there first—the iPhone 4 from June 2010 was the first with a front-facing camera, but Android phones didn’t get official support for a selfie cam until Android 2.3 Gingerbread, launched in December of the same year. We’ve only been snapping selfies properly for a decade, yet somehow it feels like it’s been much longer.

Considering Apple hasn’t really promoted this new iOS 14 feature, it’s likely they’re adding it reluctantly. When the software update arrives, it’ll be the first time iPhone users will be able to set default apps for their email and web browsing that aren’t Apple Mail or Safari—a feature Android users have been making the most of for quite a while.

The ability to make a video recording of whatever’s happening on screen has been available to iPhone users for a long, long time now. It’s still not available in Android, but it looks as though Google is readying this very feature for the launch of Android 11 later this year (currently in beta).

For some years, iOS lagged behind Android in not having a specialized low-battery mode. Apple loyalists would say iPhones didn’t really need one, but the feature was eventually added to Apple’s mobile devices in iOS 9, cutting down on the number of background processes running at once and reducing CPU performance.

Did you know you can add emergency contact information to your phone? This can be accessed directly from your device’s lock screen so other people can get to it in case something happens to you. Today, both Android and iOS have this feature in their settings, but Apple devices were the first to introduce the option. Android added it to its Nougat (7.0) update in 2016.