The most eco-friendly wrapping paper is none at all

Cutesy, shiny paper goes where most everything glittery goes: the landfill. 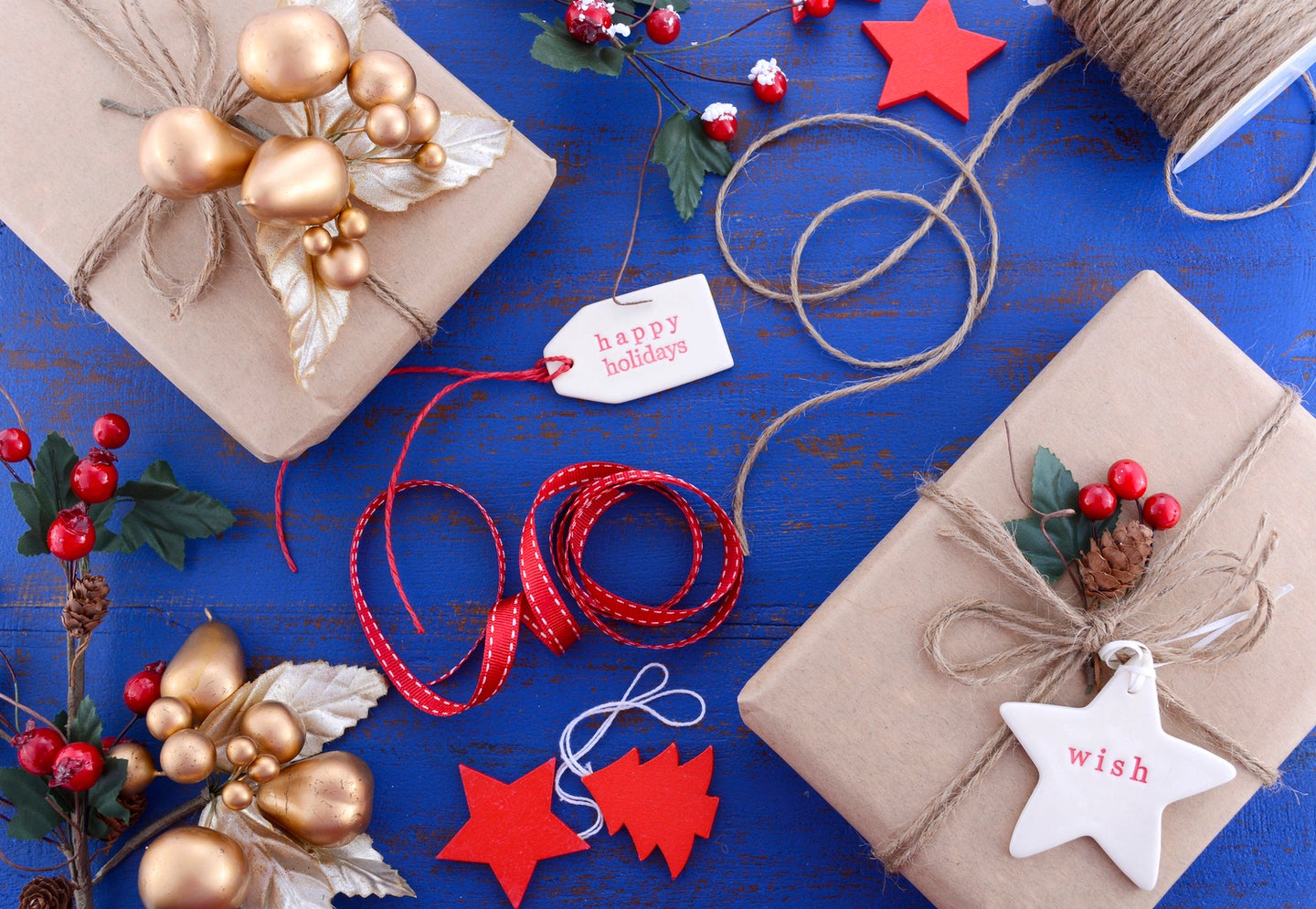 Five minutes of glittery wonder. A lifetime trying to decompose in a landfill. Think about it before you use that wrapping paper. amarosy via Deposit Photos
SHARE

Wrapping paper is ridiculous. It’s reportedly a roughly $7 billion business in the U.S. alone, as people buy it by the sheet, roll, or carefully curated package via Etsy. It creates millions of tons of waste; some estimates claim half of it ends up in landfills. While many greet those Snapple-fact-worthy numbers as whimsical holiday trivia, it doesn’t change the fact that we have somehow collectively accepted the idea that a gift isn’t truly thoughtful unless it’s literally hidden inside some shiny trash. It’s time to consider cutting it out.

“But, I recycle my wrapping paper”

Maybe you do and maybe you don’t. Despite the “paper” in its name, much of that festive wrap does more harm than good when you throw it in the recycling bin. “Paper with coatings, glitter, foil, bows, etc. is generally not recyclable,” says a representative from the California Department of Resources Recycling and Recovery. “It’s best to check with your local municipality for what’s acceptable to put in the recycling bin.” That sounds like a lot of work until you consider how much time you spent at the craft store trying to decide between Snoopy or candy canes decorating your wrapping.

The American Forest and Paper Association recommends trying something called the “Scrunch Test” as a first guideline to determine whether to trash or recycle it. Crinkle the paper up into a ball—if it stays that way when you let go, it’s fine to put in the recycle bin. If it tries to go back to its original shape, there’s a good chance it’s going to the landfill to stay with the other estimated 2.3 million pounds of plastic wrapping paper that reportedly end up there every year.

Putting the wrong stuff into the recycling chain actually makes more work for the plant and may even jam up expensive machinery. In short, those adorable little Santas in Speedos on your deluxe wrapping could be staring up at the cold winter sky above the dump for many Christmases to come while it leeches gnarly chemicals into the ground.

The AF&PA even have a name for throwing trash into the recycling bin and assuming someone else will sort it out down the line: “Wishcycling.”

Perhaps the most frustrating part is that even some paper made from recyclable materials isn’t recyclable anymore after it’s made acceptably festive with glitter and ribbon, which won’t recycle. So, maybe just stick to markers or sing a song while you hand the person the gift. That’s like audible glitter.

There are some recyclable wrapping paper options out there, you just have to find them.

Yeah, but there must be a reason to wrap gifts, right?

Opening gifts is, in unscientific terms, pretty fun. Unfortunately, there isn’t much in the way of hard data when it comes to what’s going on in the brain as you tear into the glittery paper hiding your gift.

From a psychological standpoint, a 1992 study from professor Daniel Howard at Southern Methodist University in Dallas looked into the topic by giving groups of students a sheepskin bicycle seat. Some students received them with wrapping, while others received them without.

He reportedly suggests the visual cues from the unwrapping process bias a person’s mood—students who got to unwrap their gift gave it a higher approval rating than those who didn’t. He didn’t record how many of them said, “dude, this is a very weird present.”

[Related: Can’t get a gift in time? Here are 14 you can make yourself.]

On the other side of the psychological coin, some professionals suggest that making someone open a gift in public actually promotes considerable anxiety over high social expectations. In that case you’d be much better off just handing over that One Kitty Purr Month calendar out in the open rather than building up the tension while everybody asks “What is it?!”

From a neurology perspective, our penchant for hidden gifts ties into the brain’s natural reward system that deals in dopamine. The emotion we know as “anticipation” can actually make you feel pleasurably tingly—just like it feels when you experience ASMR. But that sensation can quickly subside when you tear through some paper and find that your Secret Santa was Jeff from accounting who you’ve never spoken to. Still, the anticipation is pleasant.

While many of us associate that anticipation with traditionally wrapped gifts, there’s nothing in the way of scientific studies to say you can’t get the same—or at least similar—feelings from something less wasteful. But until someone funds a grand gift bags vs. wrapping paper study, we won’t know for sure.

OK, so what should we use instead of wrapping paper?

We asked around the PopSci office and it turns out that people have been using creative alternatives to wrapping for quite some time.

You could take some boxes you have laying around the house and paint, decorate, or otherwise adorn them for reuse every year. Who doesn’t love a mystery box?

If you’re worried your newfound renewable gift packaging won’t garner the same kind of social media attention as a traditional shot of gifts under the tree, you can fake it. Wrap one set of boxes this year, but leave the bottoms open. Put the gifts under the boxes, snap your shot, then get to the business of opening them by simply lifting the boxes. Plus, if you make the boxes similar in size, you can nest them together and store your holiday decorations.

Or maybe you can just leave you gifts in those Amazon boxes they definitely came in anyway.

Gift bags are great if you collect them as you get them or use reusable bags that serve other purposes. You’ll get the same peek-inside experience with a lot less waste. Reusable grocery bags are also handy for the recipient now that plastic bag bans have gone into effect.

Personally, I like the idea of just covering a present with a sheet, blanket, or even a tarp—if you can’t appreciate a good tarp as a gift, then we’ll likely never see eye-to-eye anyway. You can pull off the sheet like you’re unveiling a car at a press event, then gesture toward the gifts like a proud gameshow host.

If you want something truly traditional, skip the paper completely and opt for some reusable cloth wrapping. The American fancy paper trend only really dates back to the early 20th century, but other cultures have used cloth for literally ages. A Japanese furoshiki is a great option with a long history. Opening a present wrapped in fabric is like undoing a cloth diaper except instead of poop inside, you’ll find some wireless headphones or a really nice spatula you’ve been wanting.

In a pinch, you could also use beeswax wraps that the recipient can wash and use for toting lunch.

Ultimately, the goal is just to surprise your loved one, or your accountant, or whoever with whatever you got them. If you want to maximize the effect, build an elaborate jack-in-the-box that violently ejects that Olive Garden gift card toward the unexpected celebrant. Or maybe just tell them to close their eyes when you hand it to them.

OK, fair enough. You’re still wrong, but there are ways you can make it better. Buying basic paper without lots of glitter and textures typically makes the production process more efficient and, as I said before, easier to recycle. Uncoated paper is typically much easier to draw on, so you can really pour your heart out into a terrible drawing like kids have always done for parents.

We also tend to use too much paper when wrapping. This semi-viral video shows how you can often wrap a rectangular object more efficiently by turning it on an angle when compared to the cut sheet.

It’s also a great idea to skip the adornments like ribbons and anything with glitter since those things can’t be recycled at all.

If you really want to take your time and measure your object, some simple math can tell you exactly how much to cut without any waste. If that sounds like a waste of time, maybe you should consider why you’re bothering to buy paper and elaborately wrap your gift in the first place instead of tossing it in a bag and saving everyone time and trash.