Carrot-top pesto, beet ketchup, and other recipes for using up odds and ends in your fridge

Honor Mother Nature by cooking with what you’d normally throw away. 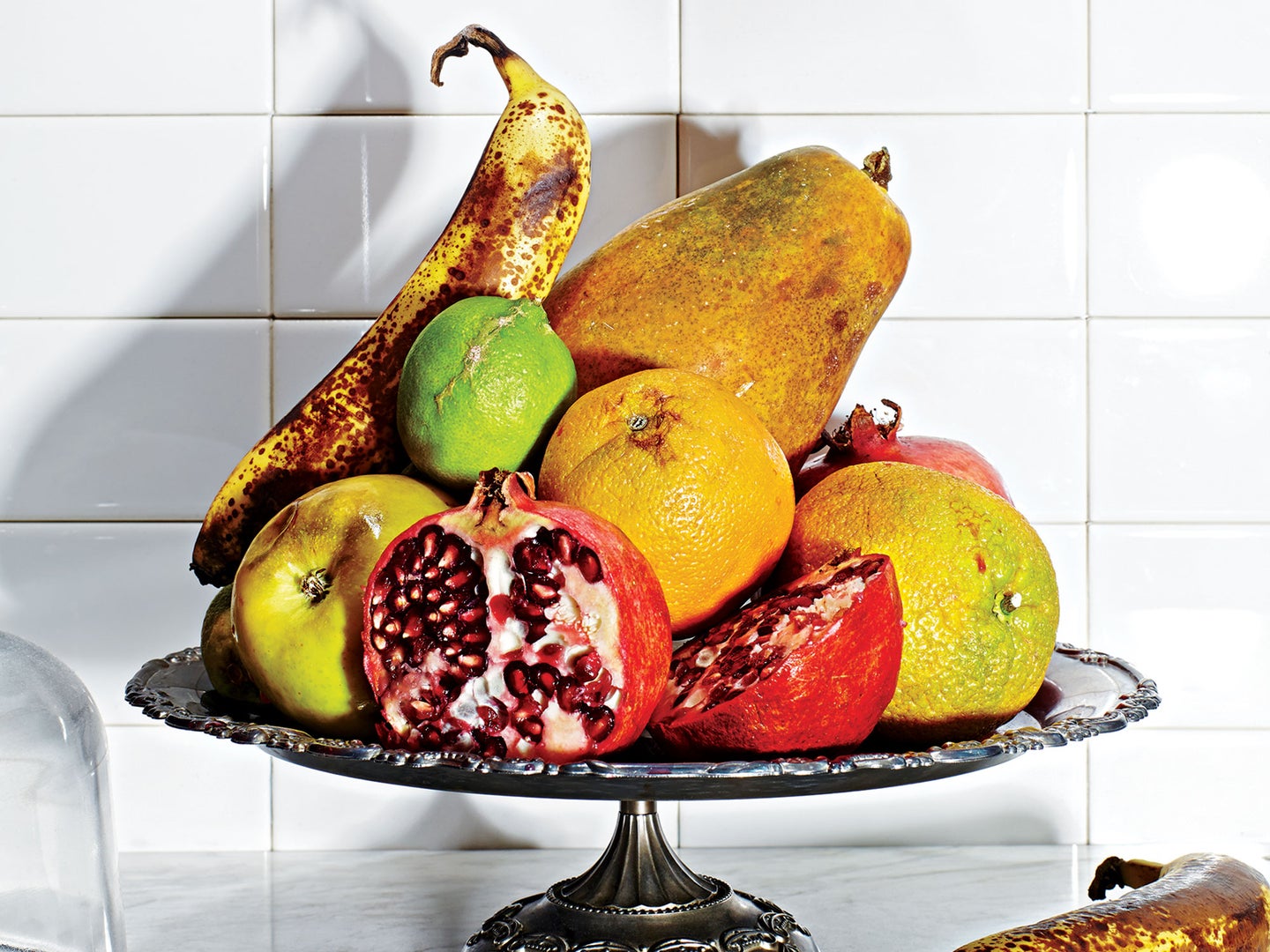 We throw away too much food: up to 40 percent of what we produce for human consumption in America. And while the fight against food waste is one we should fight every day, what better day to confront this problem than on Earth Day?

According to statistics from the Food and Agriculture Organization of the United Nations, the world chucks 1.3 billion pounds of food globally each year—enough food to feed millions of people worldwide who suffer from hunger. And chefs around the world are taking up arms against the hunger crisis by turning soon-to-expire food into sustainable, wholesome food for the homeless. It’s not only a morally and ethically sound practice; it’s also a huge money saver: the FAO cited a study where every dollar spent reducing food waste and turning ugly foods into edible meals returned $14 back in net value. And let’s not forget, food scraps can also be turned into other products, like car tires.

A few years ago, we dove into the macro-economics of how bruised, misshapen produce gets thrown away at various stages of the production process: It’s left on the fields, discarded at the warehouse, and if it makes it that far, ignored at the grocery store. But we even waste perfectly edible produce on a smaller scale in our own homes. We eat beet tops but not greens, fennel bulbs but not stalks, and radishes but not radish tops. Here’s the thing, those radish tops and beet greens could be the secret weapon in your next favorite recipe. Have a lot of carrot tops? Turn it into carrot-top pesto. Find yourself with a bunch of bruised bananas? We have a bread pudding recipe for that. From mango salad to cheese dip, here are nine recipes that use neglected produce and other leftovers to produce delicious (and environmental friendly) results. 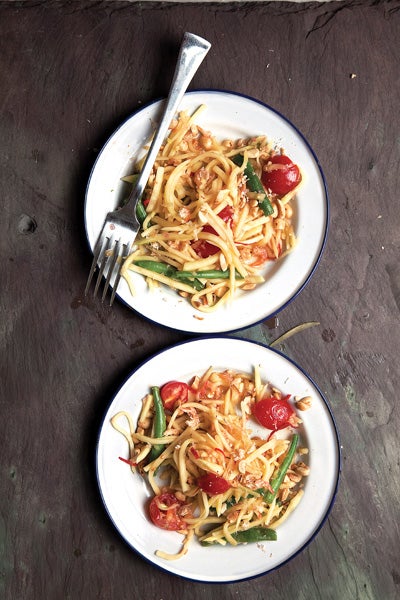 Put unripe fruit to use in a salad

Unripened mangoes are julienned and combined with chiles, garlic, and shallots to form the base of one of our favorite Southeast Asian salads, a refreshing adaptation of the more widely known version made with papaya. Get the recipe for Thai Green Mango Salad (Som Tum Mamuang). 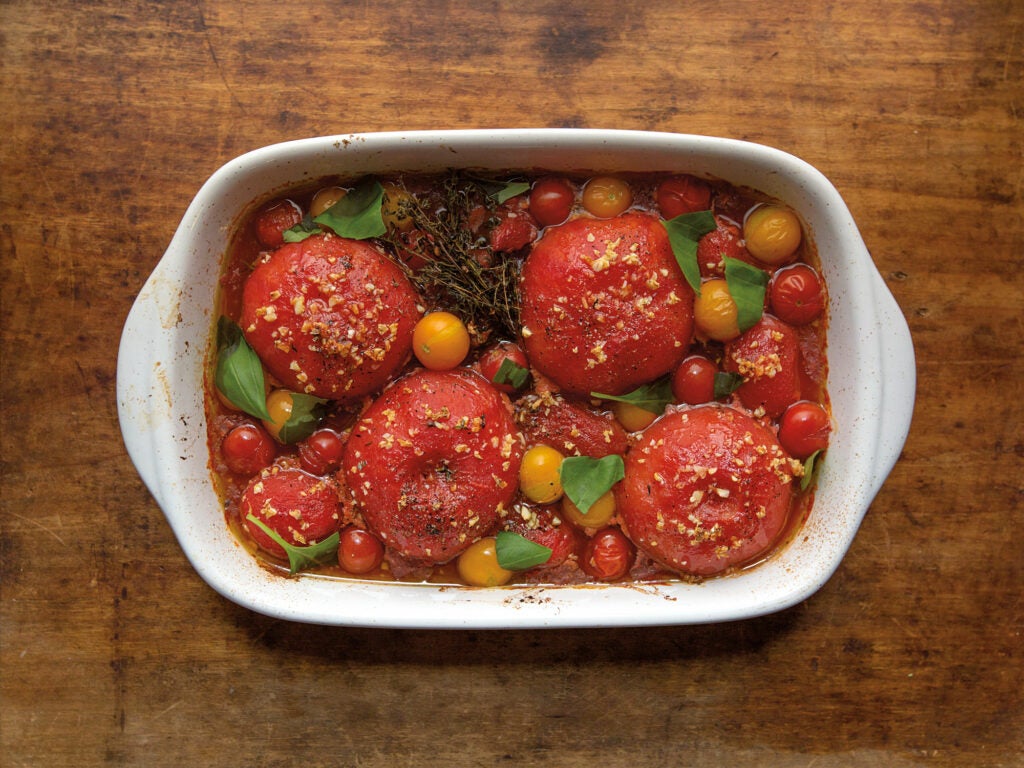 Roast your vegetables to gloss over imperfections

Three types of tomatoes result in a bouquet of flavors and textures, from sweet to burst-in-your-mouth cherries fragrant with Italian herbs. Get the recipe for Oven-Stewed Tomatoes. 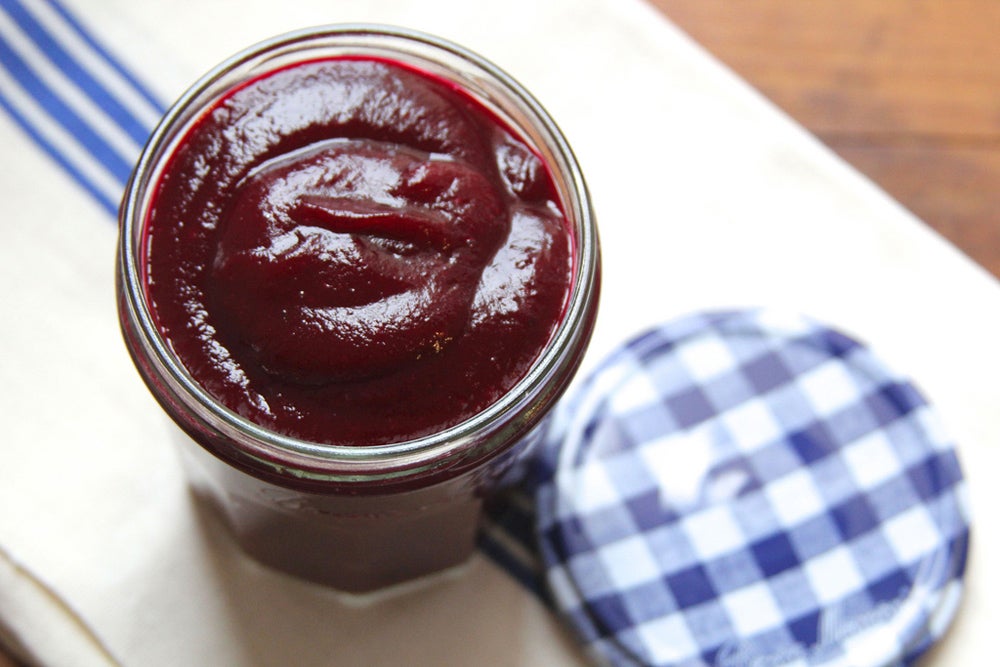 Ketchup made with roasted beets has a surprising, slightly earthy flavor—we love it in place of tomato ketchup on turkey burgers. It’s easiest to cook it over the course of two days. On day one, cook, cool, peel, and chop the beets; on day two, cook them into ketchup. A splatter screen will help keep splashes contained while cooking the purée. Get the recipe for Beet Ketchup. 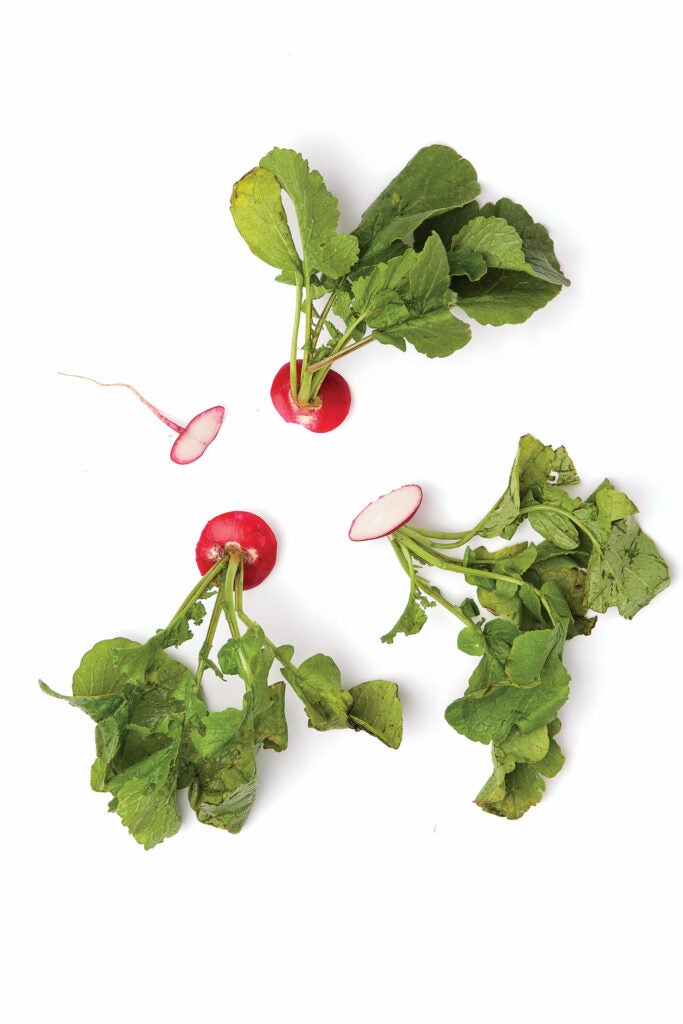 When cooking vegetables, every last scrap and stem can be useful, so don’t toss the trimmings. Joshua McFaddenj of Ava Genes in Portland, Oregon, pickles radish tops with vinegar, garlic, and chiles for this simple condiment. Get the recipe for Pickled Radish Greens. 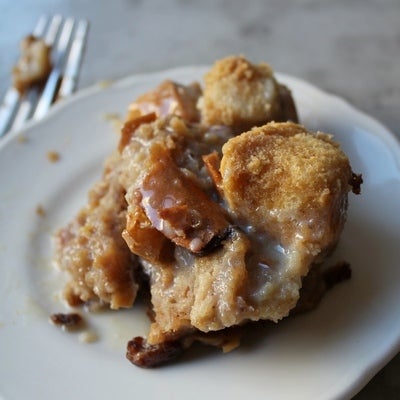 How to use up old bananas—that’s not banana bread

This rich version of bread pudding is a great way to use up overripe bananas or soon-to-go-stale bread. Get the recipe for Banana and Dark Rum Bread Pudding. 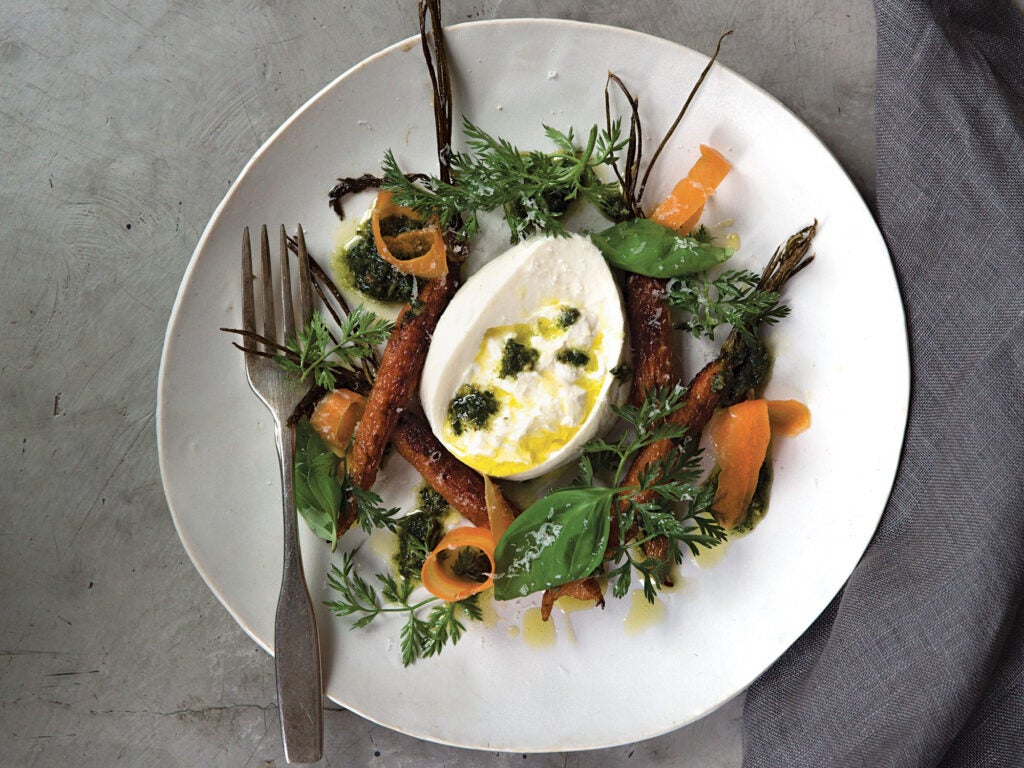 “I’ve become known for doing nose-to-tail pig cooking, so this is kind of top-to-tail vegetable cooking,” says chef April Bloomfield. In her cookbook A Girl and Her Greens, Bloomfield offers her crazy-good recipe for pan-roasted carrots with carrot-top pesto, shaved carrot salad, and creamy burrata. Get the recipe for Roasted Carrot Salad with Burrata. 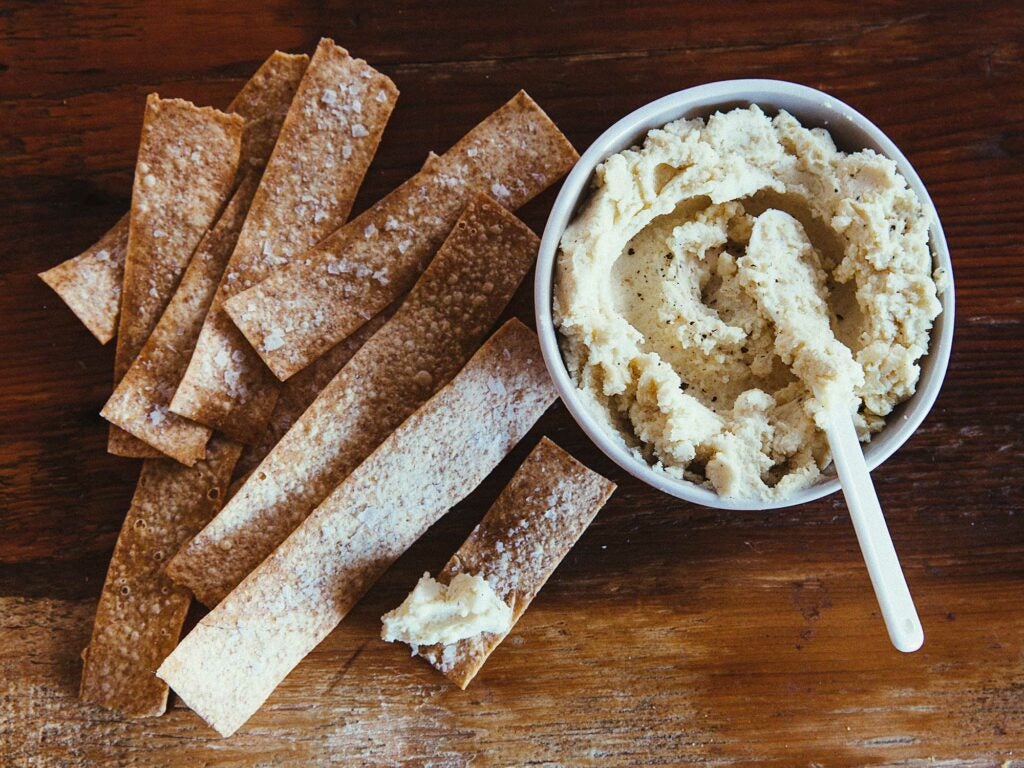 Meaning “strong cheese” in French, fromage fort is a classic way to use up all the leftover ends and mismatched scraps of cheese in your fridge. In Julia Turshen’s version, which we adapted from her Small Victories cookbook, a little butter and a few splashes of wine round out the salty cheeses and help them become spreadable enough for topping toast or crackers. Get the recipe for Fromage Fort. 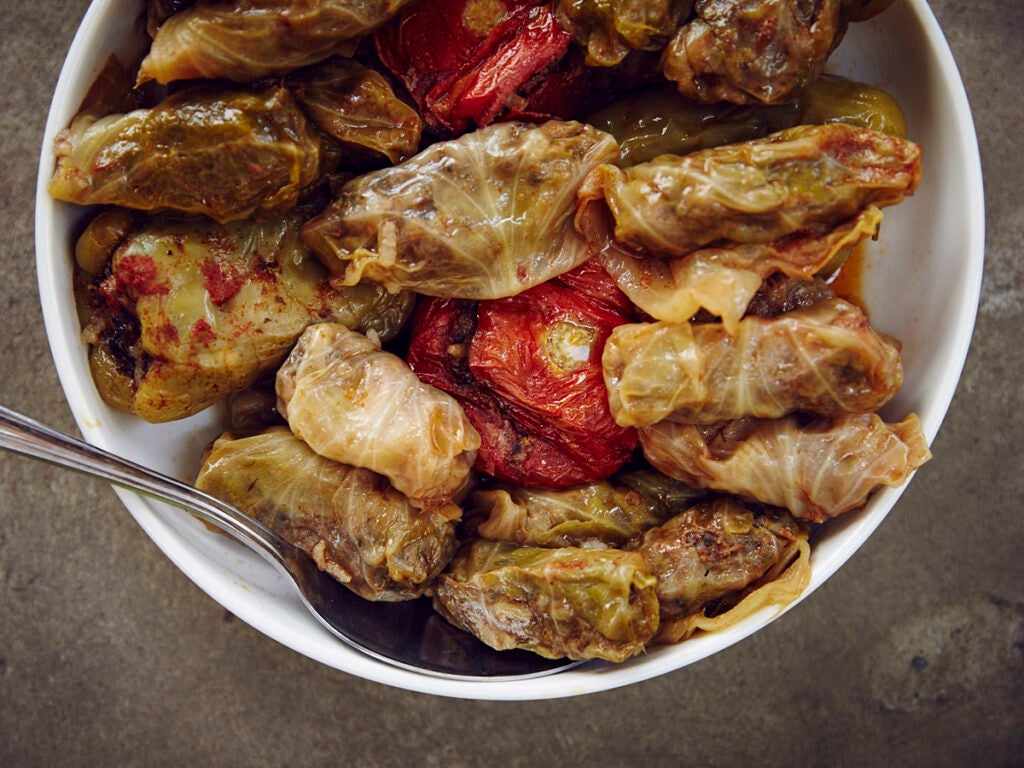 In Armenian and nearby Middle Eastern cuisines, dolma refers to a family of stuffed vegetable dishes, most often wrapped in grape or cabbage leaves. You can use this same meat-and-rice filling—and a similar steaming technique—to hollow out and stuff zucchini, eggplant, tomatoes, or peppers. Dolmas taste best warm, and leftovers can be re-steamed one or more times as desired. Get the recipe for Cabbage Dolmas. 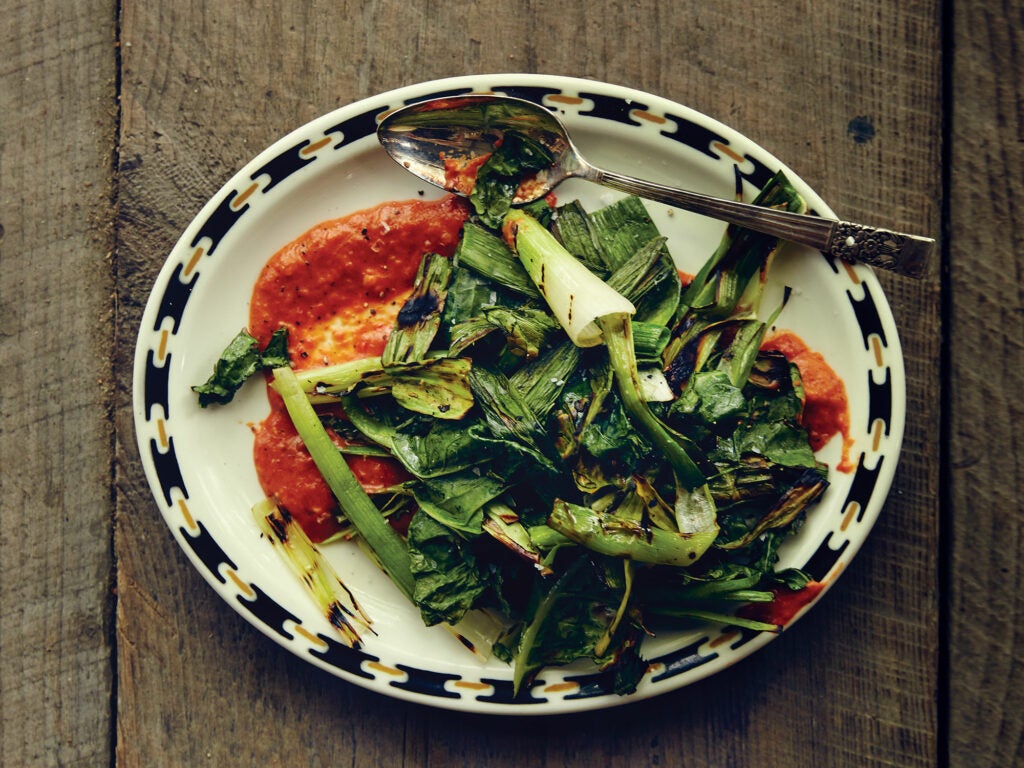 Leek tops are edible (and tasty) too

When buying leeks for this dish, cookbook author Amy Thielen says to look for ones that have all or most of their dark green tops still attached. If trimmed leeks are all you can find, use the dark and light green parts only. Get the recipe for Grilled Greens and Leek Tops with Chile-Garlic Sauce.