Whether you claim victory or accept defeat, you’ll want to play again. 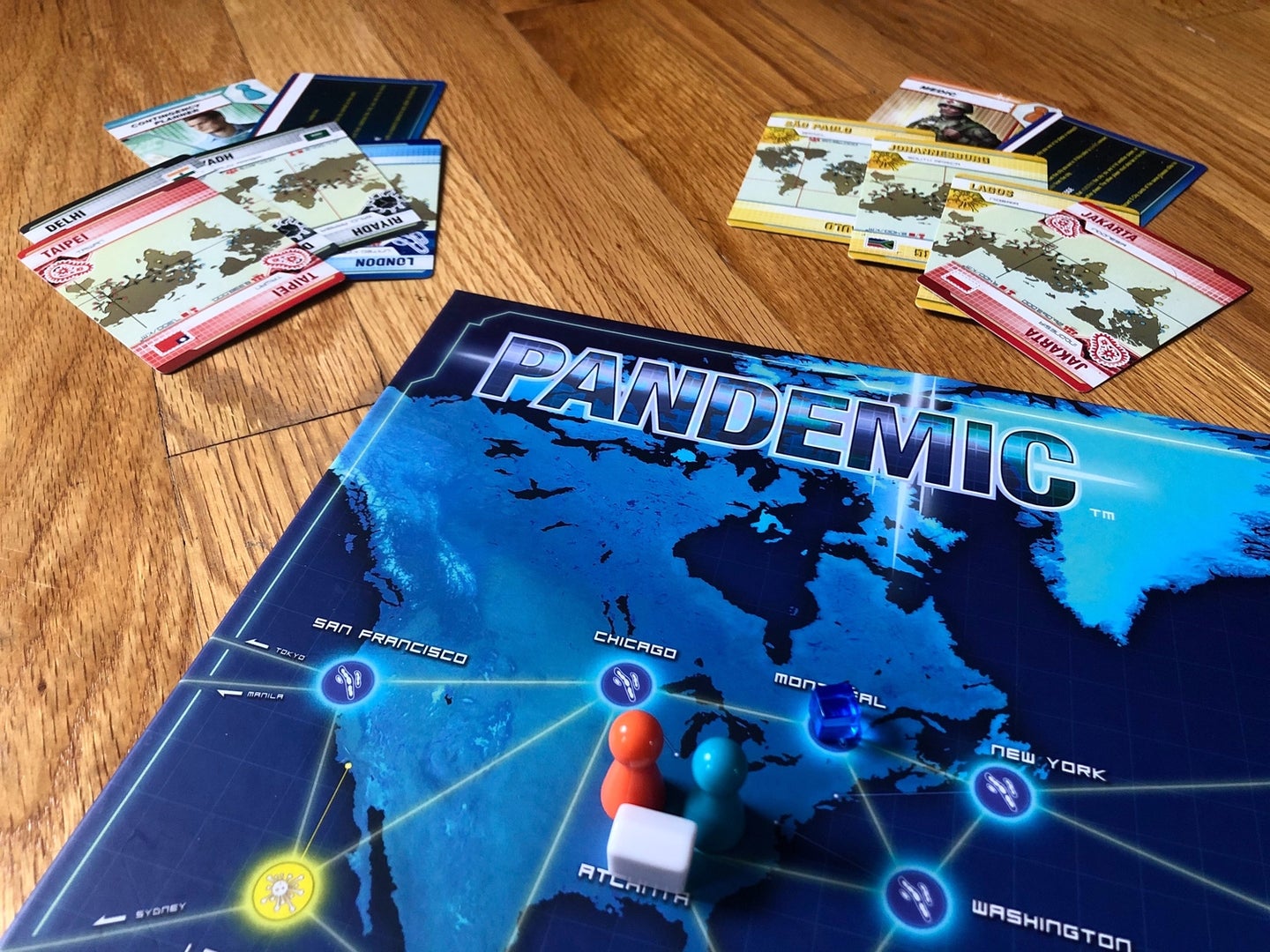 Just a medic and a contingency planner hanging out at the Centers for Disease Control and Prevention in Atlanta, getting ready to save the world. John Kennedy
SHARE

Board games don’t have to be a group activity. Some of the best are strictly two-player experiences, and they’re perfect for playing (with a bottle of wine) on date-night or instead of watching Netflix with your roommate.

Chess, the quintessential board game and a timeless classic, is an absolutely terrible two-player game—at least for most people.

Don’t get me wrong, I love chess, but it’s a pure contest of skill. The better player will almost always win and, if the two of you are somewhat evenly matched, you’ll draw a lot. Worse, while the rules are simple enough, the tactics and strategy are both opaque and deeply studied. Anyone with a cursory knowledge of opening theory will romp to decisive victory after decisive victory over someone who only knows that pawns take diagonally—and there’s no real opportunity for the losing player to learn from their mistakes. It’s just not fun for people who don’t already love chess.

Instead, the best two-player board games get everything right that chess does wrong. If the games are competitive, there’s enough luck involved that the better player won’t win easily every time, but there are still plenty of easy-to-learn tactics and strategies that the games are interesting and re-playable, even for total beginners. Often, the victory conditions are flexible and varied enough that almost every game will be close-fought until the end. They aren’t like Monopoly, where losing is a drawn-out, demoralizing process—at least as long as no one makes a horrendous blunder, victory either happens quickly or the winner isn’t clear until points are tallied at the end.

And, if you’re new to board games, you might be surprised that some aren’t competitive at all: they’re cooperative, and players have to work together against the rules of the game. Even in the most conflict-averse households, there are board games to be played.

Codenames: Duet ($20) is the two-player version of one of the best party games around. And it’s even better. Not only is it among my favorite two-player games, it’s one of my favorite board games.

Duet is simple to learn and endlessly replayable. You take turns giving each other one-word clues that correspond to the words on a grid of 25 cards. But you only have a limited number of chances—and you can lose if you guess wrong.

What makes Duet so good is that it’s cooperative with a slight competitive edge. You want to give clues that the other player can guess, but they also have to be clever enough to pick up on everything your brief hints convey. If your partner gives a dreadful clue that causes you to lose the game instantly, you won’t let them forget it in a hurry—trust me, I know.

Each game takes about 15 minutes but expect to get drawn in for a few.

A two-player spinoff of the successful 7 Wonders game, Duel ($30) is a lot more competitive than Codenames, but it’s still fun, accessible, and (typically) close.

Duel takes place over three “ages”—each represented by a deck of cards. You compete to build wonders, sack each other’s cities, and prosper scientifically and commercially. It’s a lot like Civilization, to be honest. Each player takes one card from the board per turn. But only a limited number are available at any one time, so even the most carefully laid plan can be undermined by a determined (or oblivious) opponent.

Games take about 30 minutes to play and, unless one player gets a military or scientific victory, they normally come down to the wire.

The premise of any given board game can be a bit… out there. Patchwork ($20) is no exception. You and your opponent compete to (checks notes) create the best quilt. Yep, that’s the game.

[Related: Organize and accessorize your board games with 3D printing]

In reality, the sewing-themed setup is just cover for some fast, fun, competitive, Tetris-esque mechanics. Every turn, you’ve got a choice of three patches to add to your quilt—they have different shapes, costs (in both time and the in-game currency, buttons), and benefits. At the end, whoever has the most buttons wins.

Each game takes between 15 and 30 minutes to play out and, since there’s dozens of different quilt tiles, every session is different.

Pandemic is a cooperative game for two to four players. The goal is to work together to find a cure for four diseases that are breaking out across the globe. But hey, if this hits a little too close to home right now, we won’t blame you for skipping it.

I’m going to be honest: Pandemic is more fun as a three- or four-player game, but it’s so damn good it’s still one of the best two-player board games around. Each turn, you move around the world eradicating pockets of disease and trying to research a cure. Between each player’s turn, the diseases spread, undoing all your hard work. It’s a race against time and mounting outbreaks.

With two players who get along well, collaboration is easy. There are rarely situations where you’ll have a major disagreement about what to do next. But all this means is that you have to play at a higher difficulty level to keep things challenging.

Each game takes around 40 minutes to play, and if you set the difficulty right, you’re guaranteed a hard-fought loss or nail-biting victory. You can also apply what you learn in two-player games to bigger group sessions.

Risk always held so much promise. World domination seemed like such an enviable goal, but the rules and mediocre, luck-based mechanics held it back. Twilight Struggle ($80) scratches the same world domination itch—but it actually delivers.

In this game, the players reenact the Cold War as the US and the Soviet Union. It is a monster of a game, taking around three hours to play. And, with complex rules and deep strategy that requires thinking many turns ahead, it’s definitely not a game for a lazy evening in. You have to really be in the mood to outthink your opponent (and deal with huge amounts of stress) for a long time.

[Related: Space-themed board games that are out of this world]

But—when you are in that mood, there are few games like it. You recreate, relive, and redefine some of the pivotal moments of the 21st Century. You might even sneak a win for the Soviets.