The problematic approach involves weapons systems that could be either nuclear or conventional. 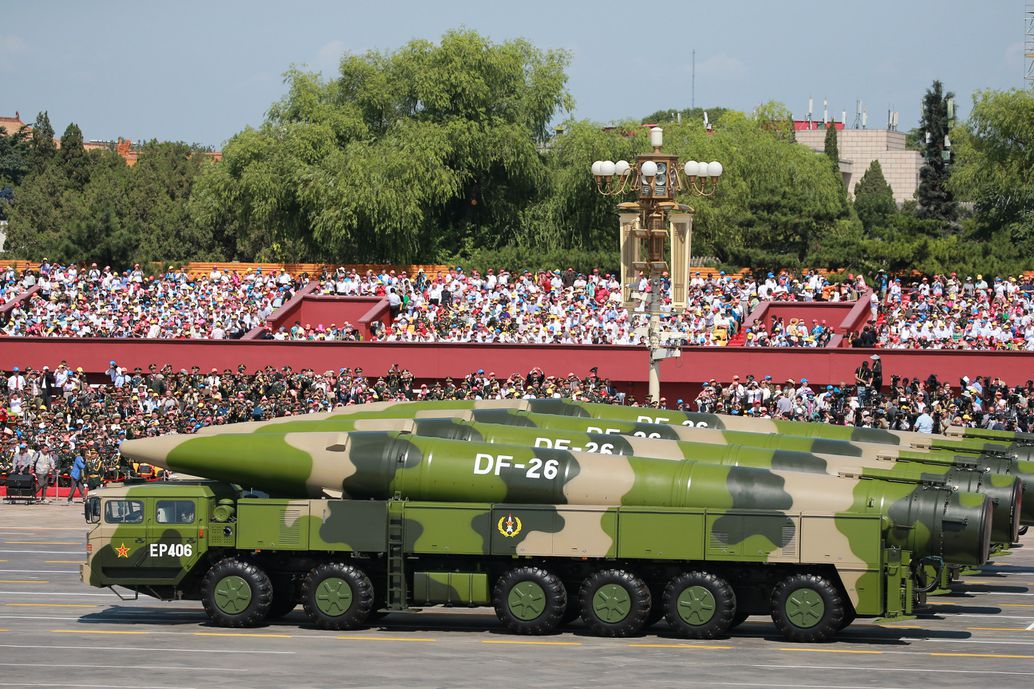 Over the last two decades, the People’s Liberation Army has dedicated massive resources toward developing missiles that have both nuclear and conventional capabilities—vehicles that can be armed with different types of warheads. The goal is to put China’s adversaries, especially the U.S. military’s bases and ships, at a new kind of long-range risk.

These include variants of the DF-26, the DF-21, and possibly the DF-17 hypersonic glide vehicle. The PLA’s rationale for pursuing this conventional-meets-nuclear strategy appears to be a combination of the cost savings that a dual-use weapon represents and a belief that what is known as “strategic ambiguity” improves China’s deterrence against strikes on its conventional missile force. The thinking is that any adversaries pondering attacking China’s conventional force in a crisis or conflict would be worried that they might inadvertently hit nuclear weapons and thus catastrophically escalate the situation.

The risk with this strategy is that such ambiguity substantially increases the danger of an accidental nuclear exchange due to mistaken assumptions. As Hans Kristensen of the Federation of American Scientists explains, if China were to fire a conventionally armed dual-use missile, but the target country was unable to differentiate whether its payload was nuclear or conventional, it may incorrectly assume it is under nuclear attack and respond with an in-kind strike back against China.

Similarly, the very scenario China sets up for ambiguity could come true: In wartime an adversary may intend to strike what it believes to be the PLA’s conventional missiles, but inadvertently hit its nuclear force. This could then lead China to believe its actual nuclear deterrent capability was the intended target.

To date, however, the general assumption has been that while this practice is potentially destabilizing, the PLA was at least separating its nuclear and conventional forces into distinct and geographically discrete brigades. This offered some hope that other countries could still tell the difference between China’s nuclear and conventional forces.

This could be set to change, though, with a discovery dating from 2017 of how China’s new DF-26 missile is being deployed.

The DF-26 missile is what is known as an intermediate-range ballistic missile (IRBM), which has a capability of traveling roughly 4,000 kilometers (2,490 miles). This type was eschewed by the US and Russia for the last three decades under the Intermediate-Range Nuclear Forces-INF treaty, until Russia violated it and the Trump administration then withdrew from it in 2019.

Importantly, the DF-26 is dual-use, able to carry a 1,200-1,800 kg nuclear or conventional payload. As James Acton, of the Carnegie Endowment for International Peace, writes in the 2020 report Is it a Nuke?:

Indeed, open-source evidence indicates that, in the case of at least one PLARF brigade, they appear to already be doing exactly that. A CCTV article from 2017 about a PLA Rocket Force launch brigade (the 646 Brigade out of Korla) reports that it is equipped with a new type of intermediate-range SSM (a likely reference to the DF-26). The article also makes clear that this brigade “simultaneously possesses both nuclear and conventional strike capabilities.”

Brigade Political Commissar Zhou Lusheng says in the report: “Our mission is the two major operations, the two major deterrences [a reference to both nuclear and conventional capabilities]… A nuclear-conventional dual-use brigade must train to simultaneously possess two different operational postures… meaning that personnel of such a brigade have a higher workload.”

And Battalion Commander Zhang Lei echoes this idea: “We must study both nuclear and conventional, meaning one man must be proficient in two billets.” The article even describes a drill in which the brigade practices firing a precision missile, then rapidly switches over to a nuclear posture for a counter-strike mission, thus “showing that this new type of brigade truly possesses both nuclear and conventional capabilities.”

Given that the DF-26 is intended to target strategic areas (it is popularly referred to as the “Guam Express” for its likely targeting of US military bases on that island), some clarity about its payload and intended effect should ideally be a priority for Chinese planners wishing to communicate its differentiation between conventional and nuclear roles. Instead, the multiple statements and reports indicate that the PLARF is moving in the opposite direction: a mixing of its nuclear and conventional forces within single brigades.

In light of the PLARF’s apparent plans to substantially increase its DF-26 force, this strategy is incredibly risky. By mixing these units, China may hope to aid its deterrence capabilities. But it is also raising the possibility of a miscalculation in a crisis or even conventional conflict leading to a nuclear exchange. In short, the revelations seem to show China deliberately increasing the risk of confusion and mistakes in precisely the arena where the so-called “fog of war” would be most dangerous.

P.W. Singer is strategist at New America and author of the books Ghost Fleet and the upcoming Burn-In. Ma Xiu is an analyst at BluePath Labs, LLC.