Dynamic Touchscreen Could Display In Braille

The future, at everyone's fingertips 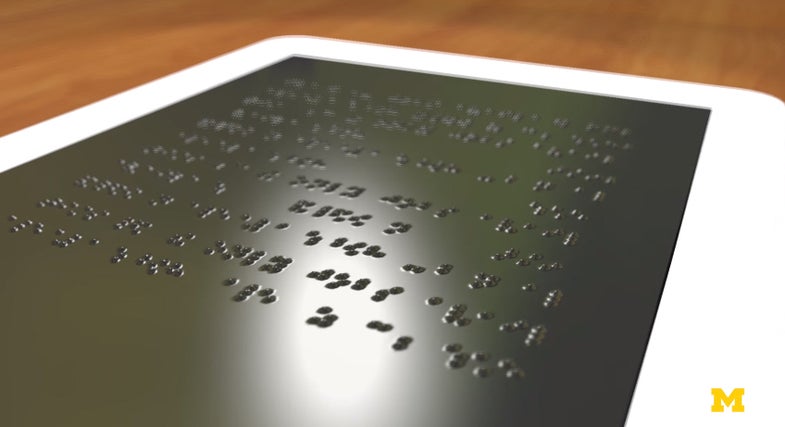 One of the weaknesses of screen-based media is how inaccessible it can be for people with impaired vision, who must instead rely on screen readers and other specialized tools to speak aloud the words in an online article. A special touchscreen tablet, made by a team at the University of Michigan, aims to bring braille into the future, by creating a readably tactile surface.

Developed in the 19th century in France by the code’s eponymous Louis Braille, the system was inspired by a military system that used raised dots to create a text soldiers could read with their fingers in the dark of night without using any light that could give away their position to the enemy. Braille’s codified system created words, letters, and characters out of a six-dot grid: two parallel rows each with three raised dots form a single Braille “cell.” Like any system of writing, it’s adapted to usage and time and often includes contractions and other shortcuts.

In print and writing, braille is raised dots on paper, placed their by a machine or by a person using a slate and stylus. Translating that to machines has meant, for the most part, creating special braille readers that use a pin in place of each dot, which is raised or depressed to match the word it’s displaying. Think of pixels on a monochrome computer monitor, only a lot more cumbersome to create. There are braille devices that can turn text on a screen into readable braille, but they’re expensive and usually only show a single line of text at a time. That’s great for a 4-digit tool like this South Korean watch that displays in braille, but not so great if someone wants to read a book or even just an article.

It also limits the kinds of information that people can read. Graphs, spreadsheets, charts of all kinds, or anything on a page showing a spatial relationship simply can’t be done in a single line reader. So University of Michigan Professor Sile O’Modhrain, together with associate professor Brent Gillespie and doctoral candidate Alexander Russomanno, are working on a pneumatic system that they hope will show a full page of braille. Instead of a pin system, it uses microfluidics, or the careful management of tiny amounts of a liquid or gas, to fill or leave bubbles on a planned tablet-like screen.

This isn’t the first device to create a tactile experience on touchscreens. The Phorm touch screen by Tactus is a touch-screen add-on that creates physical buttons using microfluidics, though it doesn’t specifically advertise itself as a tool for braille. Still, doing more with the technology is always good, and the Michigan team expects that, in a couple years when their devices is ready for commercialization, it will have a market beyond just those who need it to help with vision impairments.

Watch and listen to a video about it below: