It releases antibodies to combat deposits linked to Alzheimer's This micrograph shows a buildup of beta amyloid proteins, brown, in a patient's cortex. Nephron via Wikimedia Commons
SHARE

The outside symptoms of Alzheimer’s disease—memory loss, personality changes, difficulty performing everyday tasks—are often heartbreaking to watch or scary to experience. They are a reflection of what the disease does to the brain—sticky proteins called amyloid beta collect into plaques, which can interrupt the connections between brain cells and eventually cause the cells to die.

But what if the immune system recognized the plaques and eliminated them before they damaged the brain? Now, a team of researchers from Switzerland has created a device that can be implanted in the skin and generates antibodies so that the immune system can combat the amyloid beta proteins. The researchers published their proof-of-concept study, conducted in mice, this month in the journal Brain.

The implants are designed to deliver a continuous flow of amyloid-beta-fighting antibodies into the patient’s system over the course of 10 months. Inside the implant, engineered muscle cells make the antibody proteins. Semi-permeable membranes surround the cells, allowing just the proteins to slip through. The antibodies make their way into the blood, then the brain, where they tag the amyloid beta proteins so that the immune system can attack them.

In the study, the researchers implanted these devices in several mice from two different breeds that were genetically altered to have Alzheimer’s. Over the course of 39 weeks, the researchers tested the mice’s blood to confirm that the antibodies were present. Then, the researchers killed the mice and took a look inside their brains. They found that the mice with the implants had significantly less amyloid beta plaque in their brains, and also had decreased amounts of another protein called tau, which has also been tied to the disease’s neurodegenerative effects. 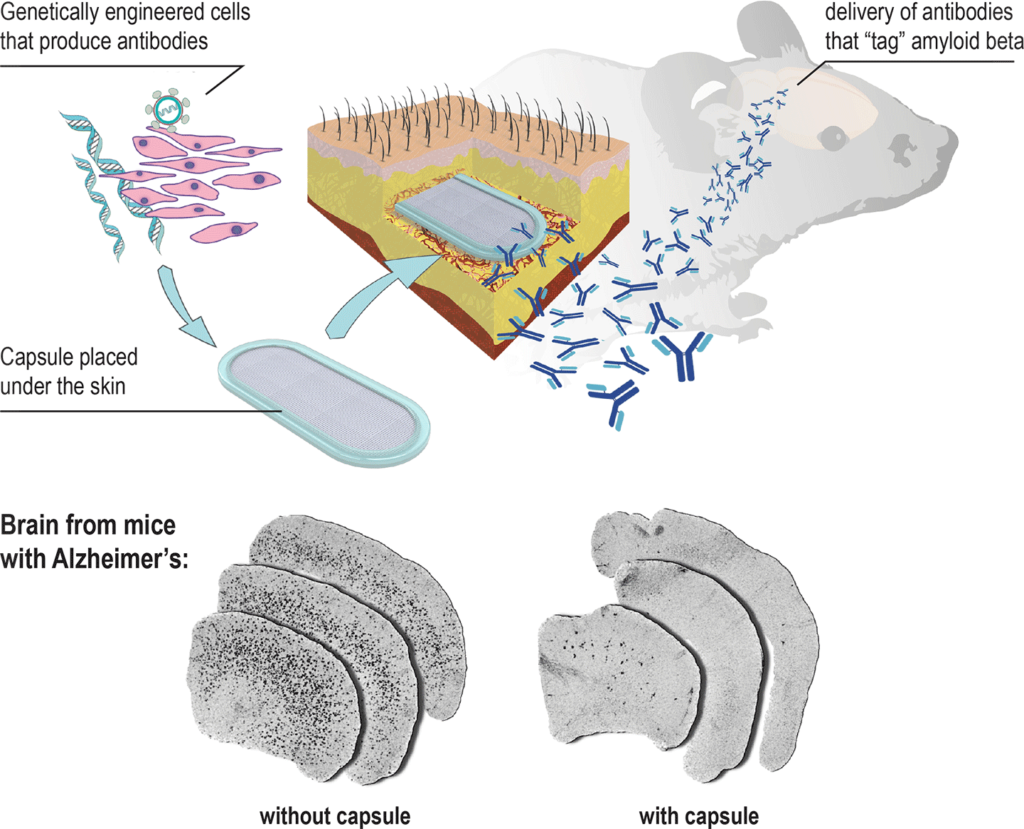 This infographic outlines how the implant works.

Scientists tried a similar immunotherapy approach to Alzheimer’s about a decade ago, but experiments eventually failed to prove that treatment’s efficacy, likely because they were used on patients with more advanced stages of the disease, the researchers write in this study. This treatment is most effective for patients in which observable symptoms of the disease have not yet appeared—no easy task in humans, since researchers are still parsing through the genetic and chemical markers that could indicate a greater likelihood of Alzheimer’s before the disease sets in.

Since this study was conducted in mice, it’s not clear that the treatment would actually work to combat cognitive decline. That’s especially questionable since there’s some evidence to support the idea that amyloid beta is useful for regular neurological function, so training the immune system to eliminate it might have additional effects on the brain.

The researchers predict that this sort of implant could be used for a variety of neurodegenerative diseases in humans. But more research is necessary before that can happen.