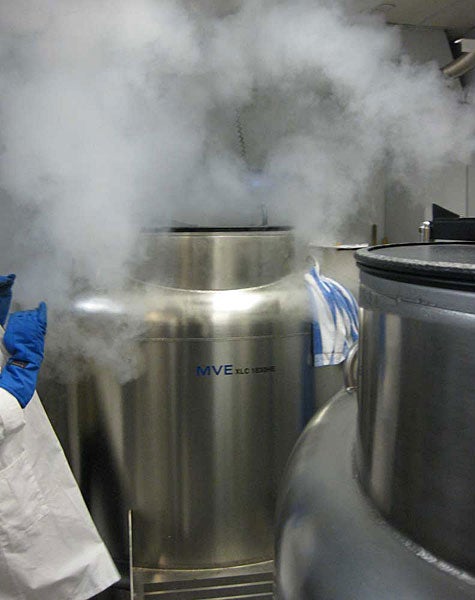 Freezing genetic samples from plant and animal species is all the rage these days, with projects ranging from San Diego’s Frozen Zoo to the UK’s Frozen Ark. But New York’s American Museum of Natural History recently scored a scientific coup when the U.S. National Park Service signed an agreement to store endangered species samples in the museum’s underground lab, which will be one of the largest such repositories in the country.

The innocuously-named Ambrose Monell Collection for Molecular and Microbial Research was established in 2001 to provide free samples for geneticists. Eight cryogenic vats can store up to 1 million frozen tissue samples in racks cooled by liquid nitrogen at –256 degrees Fahrenheit (–160 degrees Celsius), and all samples are linked to a computer database.

AP reports that the first new submissions will be blood samples from foxes in California’s Channel Islands National Park, as well as the American crocodile and Hawaiian goose. Many more will likely follow, given that the National Park Service oversees lands containing many of the nearly 400 endangered vertebrate species in the United States and lacks the facilities to store such samples themselves, according to Scientific American.

No one’s planning to use the samples for frozen resurrection or to enact a modern-day Jurassic Park effort–researchers simply want to track how species are changing due to environmental pressures. The frozen samples will still speak to scientists in ways that may help save the planet’s dwindling species.

Cool stuff for sure. However, the Doomsday Vault buried 400 feet inside an Arctic mountain still takes the prize for spookiest bio-repo/mad scientist’s lair.