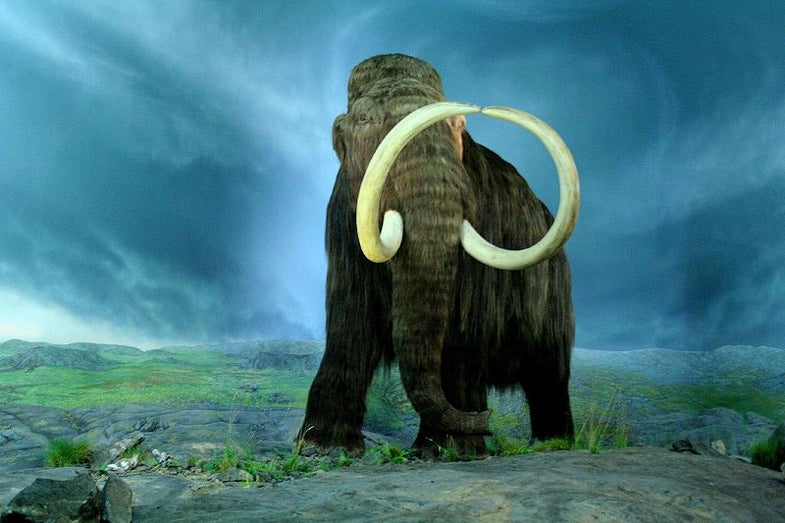 Thanks to DNA sequencing this fellow may soon have a new lease on life. (Well, not exactly, but it's still quite a coup.). Tracy O (CC Licensed)
SHARE

Long gone are the days when woolly mammoths roamed the icy North American and Eurasian turf 10,000 years ago. But in the labs of Penn State University they have been resurrected—well, almost.

While you won’t see a shaggy, 12-feet-tall mammoth brought back from the dead any time soon (unlike the 16-year-old frozen mice earlier this month), scientists at Penn State are the first to decode almost the entire DNA set of the now extinct species of elephant.

The team used DNA extracted from the hairs (which encases remnant DNA better than bones) of a 20,000-year-old mammoth mummy found in the Siberian permafrost and another 60,000-year-old mammoth mummy to sequence the extinct species’ nuclear genome. Their dataset consisted of more than four-billion DNA bases—the number they believe makes up the woolly mammoth’s as it’s close to that of a modern-day African elephant’s genome. So far they have assigned 3.3 billion (approximately 80 percent) of them to the woolly mammoth.

The genomicists are 20 percent away from a complete set, yet their work is far from over. Out of the remaining data bases, some could belong to the mammoth, but it could also very well belong to other organisms that contaminated the sample like bacteria and fungi. In order to determine which sequences belong to the mammoth, the Penn researchers will have to wait for scientists at the Broad Institute of MIT and Harvard to complete sequencing the African elephant’s genome. They will also have to wait for additional funding to finish sequencing the woolly mammoth’s genome. For now they claim their dataset is “100 times more extensive than any other published dataset for an extinct species.”