A new take on pterosaurs could improve robot planes 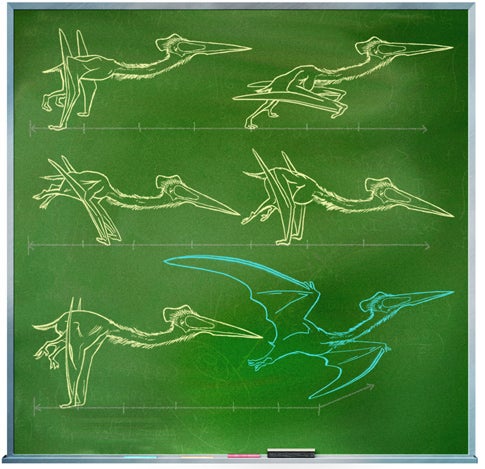 If it looks like a duck and flies like a duck, it must take off like a duck. Paleontologists long speculated that this was the case for pterosaurs, but new research shows that the prehistoric winged lizards employed a smarter launch strategy, using all four limbs to hop, skip, and jump their way into flight, instead of pushing off with two legs and flapping their wings as most birds do.

Because their hind quarters do most of the launch work, the bones in birds’ legs are stronger than those in their wings. Michael Habib, a researcher at the Center for Functional Anatomy and Evolution at the Johns Hopkins University School of Medicine, analyzed the bone structure and strength of 12 species of pterosaurs, from bat-size to one with a 34-foot wingspan. Habib found that they all had stronger arms than legs, ruling out a bird-style liftoff. “Instead,” he says, “this indicates that pterosaurs used all four legs in a one-two push to get up in the air.”

In less than a second, the pterosaur flicked its hind limbs, hopped onto its wing “knuckles,” and then gave a big push with its forearms to propel itself skyward. Habib thinks aeronautics engineers could learn from the technique. “A robotic vehicle capable of both walking and flying could launch rapidly, in limited space, using a system somewhat similar to the pterosaur’s.”