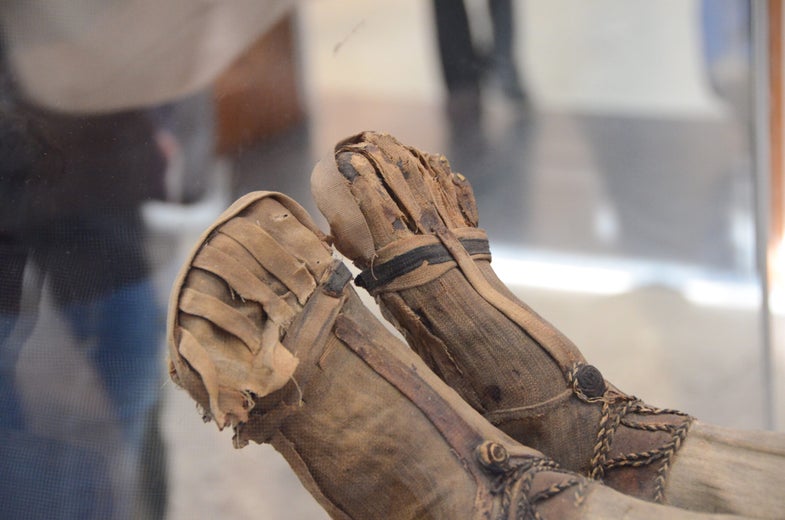 People have taken inspiration from ancient Egypt for years. There’s something about the papyrus, pyramids, and pharaohs that have an indescribable allure. Then again, it might just be that we are fascinated with mummies.

Most of what we know about mummies comes from the written accounts of historians like Herodotus, who lived in the 400s BC and recorded how the ancient Egyptians mummified cadavers. But how do we know we can trust this Herodotus guy? Instead of taking his word for it, scientists decided to test whether the ancient methods worked, taking a human body and mummifying it themselves.

In a paper published in The Anatomical Record researchers described how they successfully mummified a modern human using ancient methods.

The only catch? They didn’t use a whole human.

“If we used the whole body, we would have had to cut it up and take out the intestines [and other organs],” anthropologist and co-author of the study Christina Papageorgopoulou told Live Science. Typically, organs were removed during the Egyptian embalming process, which is a far more elaborate procedure. So instead the researchers just used the leg of a body donated to science.

Well, two legs. Another leg was placed in an oven on low heat–an attempt to mimic the arid, hot conditions of the Egyptian desert. The researchers figured that those parameters might allow them to compare the ancient mummification methods to ‘natural’ mummification, which can occur when a body is stored in an extremely arid environment. After a week, the scientists abandoned that project, “due to unexpected lack of mummification progress.”

The first leg though, was placed in a laboratory hood (usually used to sequester fumes from chemical experiments) and treated with a traditional mixture of salts. After 208 days (or seven months), the researchers were the proud caretakers of a mummified human leg, dehydrated from the salt, but with the muscles and skin generally intact and free of decomposition caused by ravenous microbes.

That’s a pretty good result for a DIY instruction manual that’s over 2,000 years old. But the length of time was way longer than the two-month mummification process the Egyptians boasted. The researchers suspect that the difference might have something to do with the fact that Switzerland, where the experiment was preformed, is a bit colder and more humid than Ancient Egypt.