Is The Secret To Better Adhesives Inside A Remora’s Head?

These little suckers could inspire a new superglue. 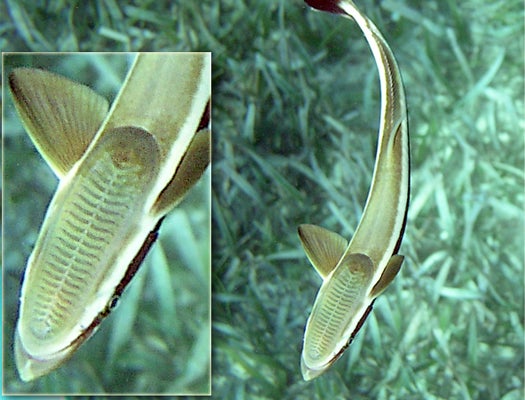 The remora, also known as a suckerfish, attaches itself to sharks, whales, turtles and any other sea creature it can grab onto with its suction disk, feeding off its hosts’ parasites and leftover meals and in generally enjoying the comforts of a free ride. The name remora means “delay” in Latin, because ancient sea farers believed the fish held up their ships.

Now, scientists at the Georgia Institute of Technology are studying the structure that allows the remora to latch on to its host, and plan to develop a new reversible adhesive inspired by the system. Their research was presented at the Materials Research Society’s fall meeting and has been published in the society’s proceedings. 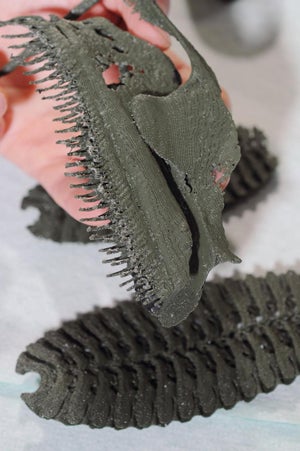 A protype of the disk that lets a remora stick to a host.

Bio-inspired adhesives have previously taken cues from some of nature’s other strong stickers, from geckos to tree frogs to mussels.

Mussels’ ability to cling fast to rocks and other objects under water have inspired waterproof adhesives and coatings, including a biomedical glue that could be used to seal fetal membranes. A product called “Geckskin” that imitates a gecko’s ability to climb up vertical and backward tilting surfaces can hold up to 700 pounds on a smooth wall.

The remora’s ability to attach comes from a modified dorsal fin on the top of their head. The shoe-grip-like disk acts like a suction cup, creating a seal between the remora and its host, one that’s possibly even strengthened by drag in the water. The ridges, called lamellae (which also help geckos gain traction) have perpendicular rows of tooth-like spinules for extra grip.

Remoras can get a stronger grip on shark skin than on any other surface, possibly because of similar spacing between their spinules and a shark’s scales.

The suction is passive, making it a good candidate for a mimetic adhesive. Muscles that raise or lower the lamellae and let remoras attach and detach from their host at will, but it appears that the maintaining the attachment doesn’t require any extra energy.

Researchers don’t foresee creating an exact replica of the remora’s suction disk, but do want to continue identifying the main features that help it stick to create a new reversible adhesive that could be used in attach sensors to objects underwater, help robots climb or create bandages that peel off without pain or residue.