The resurgence of open public streets is a centuries-old idea

Nearly a century ago, a skyscraper architect designed a future city that transformed streets into outdoor gathering spaces. That idea is making a comeback. 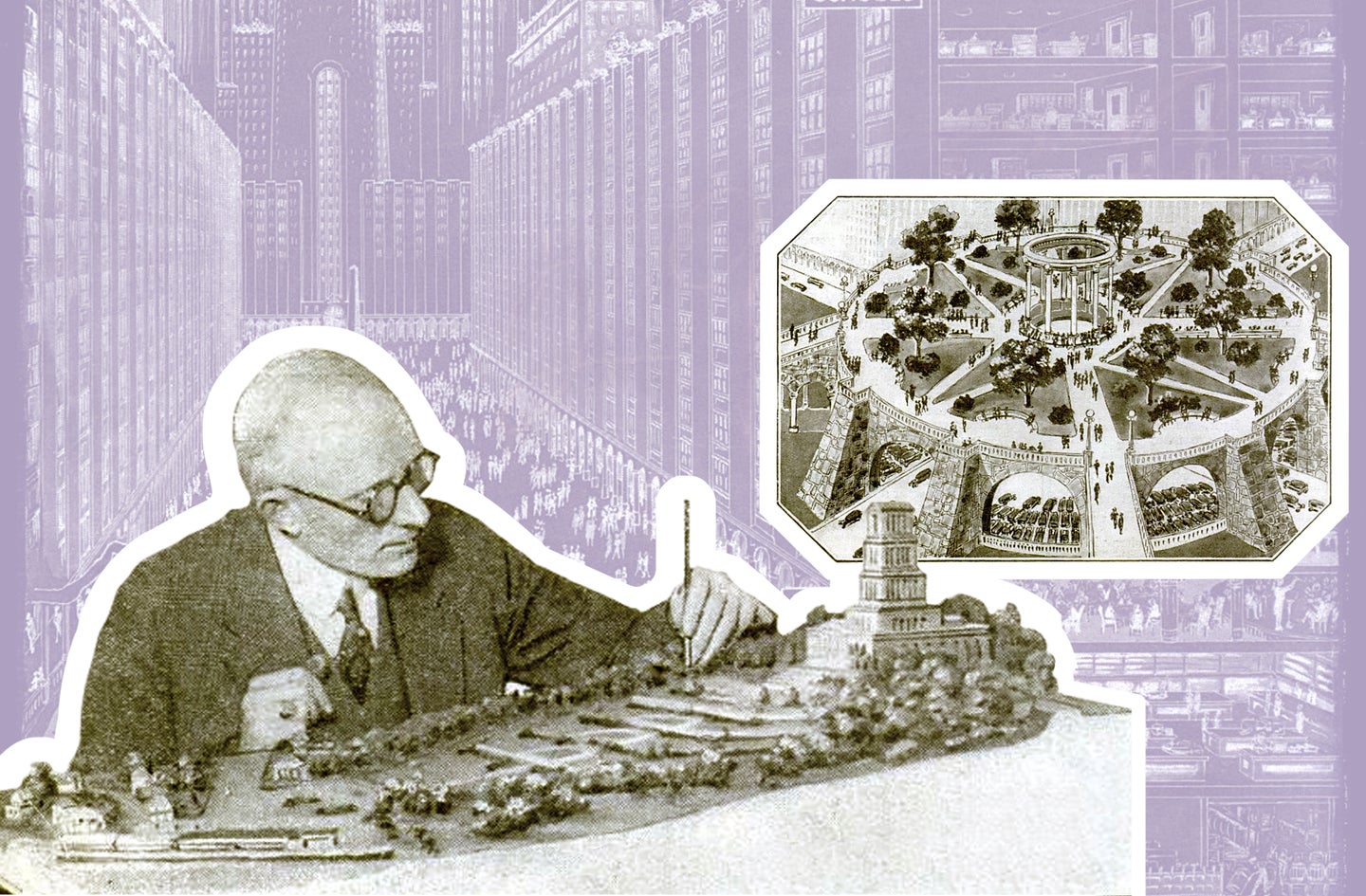 Skyscraper architect Harvey W. Corbett came up with a future city that converted streets into gathering places. That idea is making a comeback. Popular Science
SHARE

From cities in the sky to robot butlers, futuristic visions fill the history of PopSci. In the Are we there yet? columnwe check in on progress towards our most ambitious promises. Read the series and explore all our 150th anniversary coverage here.

By the mid-18th century, a narrow foot trail that once rose from its marshy source had been widened into a cobbled avenue, running from busy docks along the island’s southern end. It circuited past tree-lined shops and tall Dutch-eave houses, bell-towered churches and small public gardens, traders with handcarts and open-air markets, and even a crowded bowling green, until, to the north, the broad way’s roadbed eventually faded back to dirt and vanished into a forest that cloaked the island’s spine. Pedestrians and horse-led wagons moved up and down the vibrant avenue where the heart of young New York pulsed.

In 1925, Harvey W. Corbett, an accomplished skyscraper architect, rendered his vision of a futuristic city for Popular Science. His blueprint called for a return to holistic city streets—now called complete streets—like the one depicted above. These pathways have ample room for pedestrians, outdoor gatherings, and nonmotor traffic. A century ago, New York had already shunted its thronging street life to narrow sidewalks in order to pave the way for industrialization. By then, more than half the US population had moved into cities, overwhelming their largely organic street designs. Much like New York’s Broadway, streets evolved from trade routes and open spaces meant to facilitate outdoor gatherings—where the exchange of goods, news, and ideas forged dynamic urban cores—to congested motor-vehicle corridors. In the decades since Corbett suggested we turn back the clock, progress has been spotty. Complete-street calculus shifted in 2020, however, when the pandemic enabled city officials to press reset. But will it last?

“The complete streets concept and movement has come out of the idea that streets need to be more than just places for cars to move quickly,” notes Corinne Kisner, Executive Director of the National Association of City Transportation Officials (NACTO), an association of 86 North American cities and transit agencies. It’s about making sure that “streets are public places where people can connect with each other and move around their city in ways that are safe and equitable.” It’s the way streets used to be until the late 19th century.

As industrialization gained momentum in the early 1900s, however, and the first industrial revolution (steam engines and mechanization) gave way to the second (mass production), factories and tenements sprouted in cities, and automobiles sped up and down increasingly congested avenues and winding streets, which stank of coal sulfur and engine exhaust. Beset by congestion, increasingly toxic living conditions, and the erosion of their historic cores, city managers turned to a small but growing field of urban planners and designers to fix the problem. By 1923, Harvard was the first university in the US to offer a post-graduate degree in urban planning—a complex field of engineering, architecture, transportation, social science, and politics.

[Related: The surprising politics of sidewalks]

Corbett’s vision captured the essence of the budding urban planning movement, whose primary focus was sustainable growth and development. He also cited a desire to restore the historic vibrance of city life, which, for millennia, had flowed from the streets, commons, marketplaces, forums, churches, and temples where people congregated.

Corbett’s street design was a multi-level network fit for a modern urban lifestyle. He included a dedicated park-like upper tier for pedestrians, with ready access to public spaces, shops, restaurants, and entertainment; two subterranean levels for “motor” traffic; and a fourth for mass transit. He predicted that by 1950, most Americans would be living in his vision of a future city, with half-mile-high skyscrapers, elevated parks, and airship landing strips atop buildings. Corbett wasn’t wrong about the percentage of Americans living in US cities—64 percent in 1950, 83 percent today—but he missed the mark on street design, largely because moving more cars faster has remained the priority.

Advocate and urbanism expert David Goldberg coined the term “complete streets” in late 2003 and breathed new life into unified urban planning efforts. As a member of the federal advocacy group Smart Growth America, he hoped the phrase would help the biking advocacy organization America Bikes push bike-friendly legislation through US Congress. The catchy term was taken up by many urban planning organizations across America, and by 2017 cities had enacted more than 100 complete-streets policies. The efforts all advocate for a mix of common features, much like Corbett’s design, which emphasized pedestrians, public spaces, sustainability, accessibility, and greenery—all while combating traffic congestion.

While Corbett’s nearly century-old concepts align with contemporary complete-streets goals (all but the “pure air piped in from the country” and “spiral escalators”), Kisner offers a different take on his vision. “There has been this assumption for a long time in this field that we can engineer our way out of congestion—you know, design more roads, or make multi-leveled roads that will solve everything, and it’s just not true.” More roads, more lanes, more levels mean more congestion if moving cars remains the goal.

Instead, Kisner, like other complete streets advocates, wants to break the moving-cars-as-priority paradigm. “We know how to design streets in ways that are less dominated by automobile traffic,” she adds. In 2017, NACTO commissioned its own futuristic blueprint of city streets, dubbed Autonomous Urbanism, which shifts the focus back on pedestrians rather than vehicles. Autonomous Urbanism “prioritizes people walking, biking, rolling, and taking transit, putting people at the center of urban life and street design, while taking advantage of new technologies,” the authors write in the NACTO report. It offers today what Corbett offered in 1925: an optimistic rendering of city life. Unlike Corbett, NACTO was wise enough not to set a timetable.

[Related: Urban sprawl defines unsustainable cities, but it can be undone]

But it would take a pandemic to truly break the moving-cars paradigm—or at least interrupt it—and open up city streets to pedestrians and merchants once more in an effort to keep cities’ commercial and cultural hearts beating. In many ways, pandemic-driven open streets initiatives restored the essence of city life that urban planners have been striving to recapture since the dawn of industrialization: taking city streets back from fast locomotion and restoring them to slow congregation. It’s the sort of transformation that has rippled around the world, and has often manifested in cleaner air, quieter neighborhoods, and more resident interaction, even despite a lockdown and social distancing. This transformation is exemplified nowhere better, perhaps, than on the normally traffic-filled 34th Avenue in Queens, NY. Every day from 7:30 a.m. to 8 p.m., the streets close off to cars and make way for salsa dancing, yoga, and arts and crafts. The communal gathering point offers a rare shared space for culturally diverse groups to interact and is viewed by some locals as a miracle.

According to an October 2020 report by traffic analytics firm, Inrix, Manhattan saw “a significant 31 percent jump in activity near Open Restaurants” in July that year when outdoor dining went into effect. But cities now face the decision to either reinstate pre-pandemic traffic—closing their streets to pedestrians and markets—or seize the opportunity to move toward the more livable version of city life envisioned by Corbett as far back as 1925.

“City Departments of Transportation all over the country are having conversations with their communities about what we have learned throughout the past year,” says Kisner. “I think we’ll see more evolution as things shift from this temporary or pilot space. And we’ve got time to uncover what worked, what didn’t work, and what we need to do to make sure that the way we’re designing streets continues to be really inclusive and sustainable.”

are we there yet?
cities
PopSci 150
streets
urban design