Could radiation from the Higgs boson turn us all into monsters?? No, but watch this fun trailer, filmed on-site at the LHC by physics students. 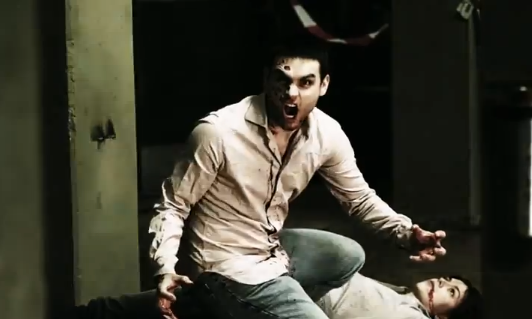 At first I thought the zombie trend was kind of played out, but then I saw this trailer. It’s another zombie film, but this one has the Large Hadron Collider! The Higgs field! “Decay” as one of the nerdiest plays-on-words ever! It’s great.

A bunch of physics PhD students made “Decay,” which is set and filmed at the LHC in Switzerland. It is neither authorized nor endorsed by CERN, obviously, but that didn’t stop them from filming the huge ATLAS detector and CERN meeting rooms, and talking about the recently discovered Higgs boson.

As you can glean from the trailer, something bad happens to the LHC’s particle beam. Cautious scientists warn that experiments should shut down, but the hunt for the Higgs is “the highest priority,” says the evil fake CERN director. Then, zombies. It looks like radiation invades everyone’s brains as the smashed particles decay into constituent parts. Get it? Decay?

If the LHC could make zombies, we would already be overrun by them, because the same type of radiation hits us, like, always in the form of cosmic rays. But it’s still fun.

A cast and crew of 20 students, working with about £2,000 (about $3,200) made the movie using a camera shoulder-mount built from copper pipes, fake blood from syrup, and props scavenged from dumpsters. “Decay” will premiere online, under a creative commons license, sometime in November.