A change of skin tone can bring a change of heart, apparently. 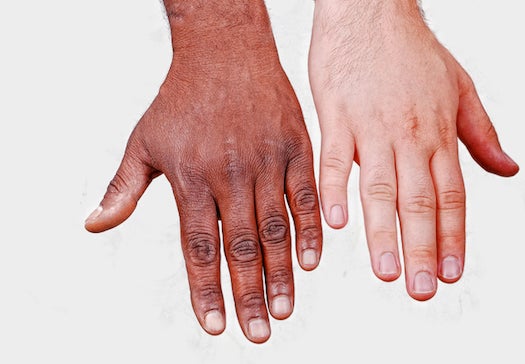 An optical illusion can change the implicit biases of Caucasian people against people with darker skin, according to a study published in the August 2013 edition of Cognition. 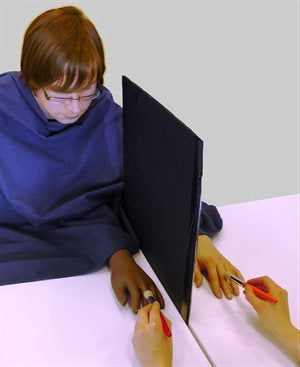 The research, a collaboration between Royal Holloway University of London, the Central European University in Budapest and Radboud University Nijmegen in the Netherlands, analyzed the implicit racial biases of 34 Caucasian participants, then subjected them to something called the Rubber Hand Illusion, where they watched a rubber hand being touched by a paintbrush as they felt their own hand being stimulated out of sight. The illusion creates the sense that the fake hand is part of the subject’s body, even when it’s of a completely different skin color.

The more the participants felt like the darker skinned fake hand was their own, the less racist they came off in a second implicit bias test.

In another test, participants underwent the same process, but some saw a white hand, while others saw a dark hand. The implicit bias test showed that the opinions of those who saw the white hand didn’t change, while again those who felt ownership of the darker hand felt less racial bias.

“Across two experiments, the more intense the participants’ illusion of ownership over the dark-skinned rubber hand, the more positive their implicit racial attitudes became,” the authors write. 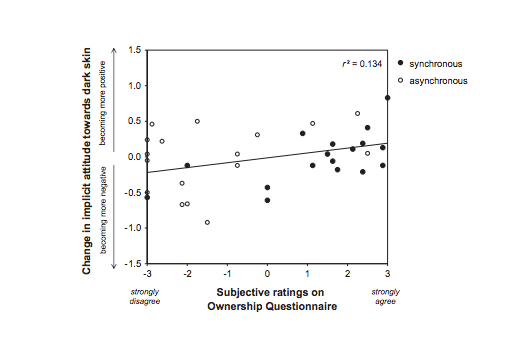 Participant’s implicit attitudes about race changed when they felt the illusion of bodily ownership over a dark-skinned rubber hand more deeply.

“It comes down to a perceived similarity between white and dark skin,” lead author Lara Maister of Royal Holloway University of London said in a press statement. “The illusion creates an overlap, which in turn helps to reduce negative attitudes because participants see less difference between themselves and those with dark skin.”

The study suggests that racial biases aren’t necessarily cemented by adulthood, but that they can be altered. “Changes in body-representation may therefore constitute a core, previously unexplored, dimension that in turn changes social cognition processes,” the authors write. They suggest that future research into different social groups and stereotypes could expand on their work, since this research only explored the attitudes of white individuals.