The infant's 3-D printed trachea will fully absorb into his body in two to three years. 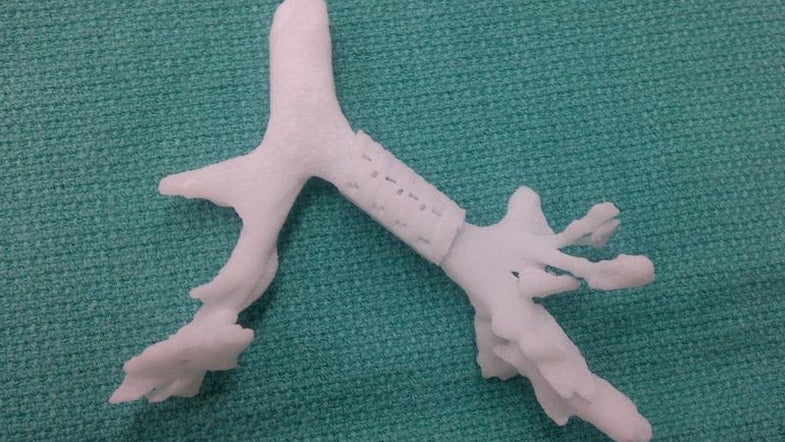 We’ve seen plenty of 3-D printed medical implants for patients that require replacement tissues, but this use of 3-D printed biopolymer to augment and correct an existing tissue highlights just how amazing the convergence of 3-D printing and medicine is (and will be). Kaiba Gionfriddo was born apparently a normal, healthy baby, but at six months of age he stopped breathing. Regularly. Due to a condition known as tracheobronchomalacia Kaiba’s windpipe was collapsing during regular breathing, and he had to be hooked to a ventilator to be kept alive.

Short of conventional options, Kaiba’s doctors contacted researchers at the University of Michigan who had been experimenting with 3-D printed bio-absorbable polymers. Using high resolution imaging to build a digital picture of Kaiba’s trachea, they were able to print a customized biopolymer tracheal splint for the infant using a 3-D printer.

The splint was surgically sewn around Kaiba’s airways in February of last year. Just 21 days later he was taken off the ventilator and hasn’t been back on it since. His trachea is now growing normally around the splint, which will fully absorb into his body after two to three years. With a little ingenuity, a condition that could’ve plagued Kaiba for his entire life–and likely would have had he been born ten years ago–has been cured.

One of the doctors who worked on the 3-D printed tracheal splint called Kaiba’s case “the highlight of my career so far.” Given the vast potential for 3-D printing to work what used to be considered miracles in medicine, that may not remain the case for long.