BeerSci: Is That Water In Your Pint Glass?

Anheuser-Busch is being sued for watering down their beer, but there's a way to test for that. 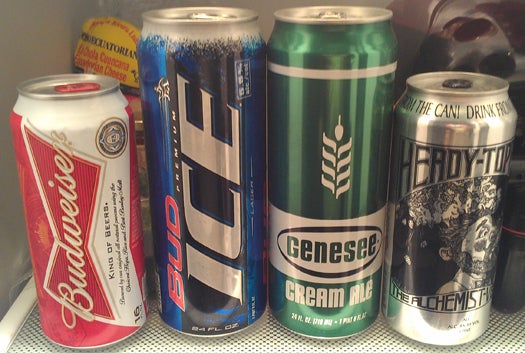 I was going to write about hops and the people who crave them this week, but got distracted by the unfolding drama around AB-InBev. The booze giant has had a crappy run over the last few weeks: First its merger with Modelo was quashed by the Department of Justice on anti-monopoly grounds. And this week news broke that someone launched a class-action lawsuit against the company for watering down its beer. The basis of that lawsuit, as far as I can tell, rests on the claims from former Anheuser-Busch employees that the beer is diluted just before bottling, suggesting that there’s less alcohol in the bottle/can than what is stated on the package.

My colleague Paul and I decided to run some tests this week on some of the beers named in the lawsuit — Budweiser, Bud Ice and Hurricane — to see if we could detect unusually low alcohol content. Paul has a refractometer, whereas Team BeerSci kicks it old school with a hydrometer. Beer people will already see the pitfalls of these approaches: One needs to know the pre-fermentation values (gravity or Brix) of the beer in order to figure out the eventual ABV. But putzing about on the Internet, at least in the case of the gravities, gives one a very general idea of what the original gravity of the King of Beers is supposed to be. The principle behind calculating ABV using density is pretty simple: solutions with a lot of sugar in it are denser than solutions that don’t have a lot of sugar. So the brewer tests the density of the beer before adding yeast, then tests it again after fermentation is finished. By calculating how much sugar was metabolized by the yeast, one can roughly calculate the alcohol by volume.

Our estimates are close to what is stated on the can of Budweiser: depending on OG, we got ABVs of between 4.8 and 5.1%. That lower end does jibe with the lawsuit’s claim that the beer is watered down by “three to eight percent” — but as you can tell with the data spread, my numbers are not sturdy enough to be used in court for either side of the debate, and we didn’t even both measuring the Bud Ice values. Happily for us (and, apparently, Anheuser-Busch), White Labs of San Diego also tested AB’s beer, including Budweiser, Bud Light Lime and Michelob Ultra, right out of the packaging. White Labs, for those who aren’t into brewing, is an independent company who sells yeast strains and a variety of analytical services to wine and beer makers. White Labs’ method, which uses a precise near-infrared laser spectrometer to directly measure the amount of ethanol in a sample, is more precise than my kludgy hydrometer reading, and one doesn’t need to know the starting gravity — in fact they offer their testing services to microbreweries and home brewers so that everyone with $100 can test for what big breweries routinely do: chill haze, IBUs, ABV, turbidity, calorie content, etc. According to NPR (who commissioned the tests) and a White Labs analytical lab employee Kara Taylor, the Anheuser-Busch beers all had the proper amount of alcohol by volume. For example, cans of Budweiser say that the beer is 5% ABV; a can of it tested to be 4.99% ABV. Why the plaintiff’s lawyers couldn’t manage to pony up $100 of their own to get the offending beer tested before launching the lawsuit is beyond me and just about anyone else out there who knows a thing or two about brewing.

As for the idea of adding water to beer to “dilute” it — that’s a pretty typical practice even for homebrewers, and especially those who use all-extract or partial-mash recipes. It’s simply more efficient, in time and energy costs, to boil smaller volumes of water. Our boil volumes are always around three gallons. After the boil is finished, but before we pitch the yeast, we add another two gallons of water to the fermenting bucket to bring the beer up to the final five-gallon volume. For larger breweries, more-concentrated worts and beers mean that one can brew a lot of strong beer, then dilute it to the proper ABV at bottling. This is especially useful in a beer like Budweiser (a light American lager that uses a lot of adjunct such as rice and corn), which doesn’t have a whole lot of body or flavor to be ruined during dilution.

Out of curiosity, I tasted the Budweiser that didn’t get used in our hydrometer test, as I haven’t had the beer in many years — certainly not since I started brewing again. The result: Sweet, faintly musty fizz water. If I were the type to file a class-action lawsuit, I’d be demanding to know where the hell the hops went.