Bullet Solves Crime By Tagging Shooters And Snagging Their DNA

Nanomaterials scientists develop a solution to the problem of heat--emitted when a weapon is fired--destroying precious DNA evidence. 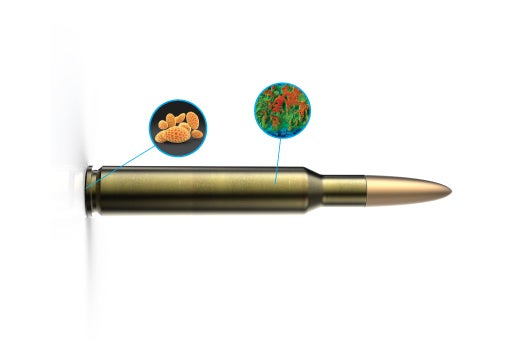 Sherlock Holmes could look at a gun shell and know exactly what went down. The firearm? The shooter’s stance? The culprit? All revealed with a glance. In the real world, using a shell to solve a crime is a painstaking, and often unsuccessful, process. Investigators may be able to match a bullet with a gun type, but that doesn’t necessarily lead to the person who shot it. Useful fingerprints are rare, and the heat of firing a weapon can destroy DNA evidence.

A team of nanomaterials scientists led by Paul Sermon, of Brunel University in England, has developed a bullet that captures the DNA of anyone who touches it—and leaves a tracer on the person, too.

Scientists dipped a bullet in a formaldehyde-urea resin, creating a microscopic scratchy surface that snags skin cells. When fired in lab tests, the bullet retained 53 percent more analyzable DNA than an untreated one.

The team needed a compound that would tag whoever handled a bullet, something both sticky and rare enough to be recognizable. They started with a natural source: pollen. Because of its rough texture, pollen clings to skin and clothing; some grains even remain after a handshake or a run through a washing machine. They’re also invisible to the human eye. Pollen alone, however, isn’t unique enough to pinpoint a criminal. So the team coated Easter lily pollen with a 63-nanometer layer of titanium dioxide—a combination that doesn’t exist in nature. A bullet painted with thousands of the modified pollen grains would mark a shooter’s finger when he loads the bullet. To have any effect on crime, governments would have to require that ammunition manufacturers make modified bullets; Sermon’s team is in talks with U.K. officials.